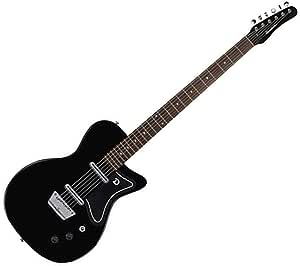 Brand: Danelectro
4.5 out of 5 stars 13 ratings
| 6 answered questions
Currently unavailable.
We don't know when or if this item will be back in stock.

4.5 out of 5 stars
4.5 out of 5
13 global ratings
How are ratings calculated?
To calculate the overall star rating and percentage breakdown by star, we don’t use a simple average. Instead, our system considers things like how recent a review is and if the reviewer bought the item on Amazon. It also analyzes reviews to verify trustworthiness.

Robert W. Gomez
5.0 out of 5 stars A Good Guitar, but Don't Expect High-End Quality
Reviewed in the United States on June 5, 2014
Verified Purchase
I have had this guitar for about a week now and, so far, I am really liking it. I am primarily a bass player but I love the hollow twang of Danelectro guitars... I like to think of it as almost a cigar box banjo sound. Be warned, you may not like this guitar if you are into heavy overdriven rock. My band plays punkish noise rock and it's a really tough struggle to get my Dano Longhorn bass to fit with that style and I suspect this guitar would require quite a bit of pedal experimentation too. But that aside, I got this more for myself, not my band, and I love me some twang! It's perfect for 50's style rock or 60's surf/spy music.

The guitar itself is, as one would expect from Danelectro, not the highest quality build. The 60's versions were inexpensive department store guitars and these reissues don't have much modern improvement over the originals. That means the tone knobs and tuning pegs are plastic, the bridge is not adjustable and the body is a hollow plywood build. One small improvement is that the truss rod can now be adjusted at the headstock (instead of having to take the neck off) and the binding tape doesn't actually hold the body together (just there for looks). Another improvement is that, unlike my 90's longhorn bass, the strap pegs are metal instead of plastic.

When I got mine it arrived in mostly good shape. Here were some problems:

1. The tone knobs were pushed in a little to far so I couldn't set tone without also spinning the volume. That was fixed by just pulling out the inner knob a millimeter or so, but, man, those plastic knobs just seem so fragile and easily lost.

2. The binding tape was starting to peel away at the end (near the rear strap peg). This was fixed by blowing a hair dryer on the the tape for a little bit to warm it and get the glue to stick again. Not sure if this is a permanent fix, but it's been a week and it is not peeling away anymore. It seems like a strong hold.

3. The fret board from about the 14th fret up has what looks like wearing on the edges wood. This is purely cosmetic and doesn't affect my playing. You can oly see this if you are looking closely at the fret board.

Despite these problems, I still am giving this guitar a 5-star rating. I got mine new here on Amazon for $379, and, for that price, I am willing to overlook the cheapness of the build. I think the guitar sounds great tuned to B-B. I also tried it for a while tuned to A-A and that seemed to work fine as well but I prefer the tighter tuning. I was also in the market for a Fender Bass VI but chose to go with the baritone because, unlike the Bass VI, this plays more like a standard guitar. The strings aren't too heavy and you can play chords all the way down the fret board. Add a little reverb and some tremolo and you'll be twanging like Duane Eddy!

Sr. Vargas
5.0 out of 5 stars Spaghetti and then some surfing!
Reviewed in the United States on March 28, 2013
Verified Purchase
I love this guitar. Ain't no two ways about it. The tone, the twang, it's like it was made for me. Many moons ago, I had a song on KROQ in L.A. That song, WHY DO YOU REMAIN SO ALOOF?, had alotta twang from my blond '69 Fender Telecaster. I sold it to pay for a ticket to the west coast. Long time ago.

As an artist and composer, the Danelectro tone inspires me. I've already recorded some sequences I'm using in songs for my first iTunes release in a decade. I just love the sound of this guitar. I scoped it out on YouTube b4 I bought it. There were some issues when I first plugged it into my iPad via iRig.

I replaced the strings the guitar came with after a week or so. The top 3 strings buzzed before and after I replaced the string set. Ugh. This made the guitar unplayable. In spite of this, I was unwilling to ship it back to the seller. I took the guitar into the repair shop at Guitar Center for an evaluation. The technician said the guitar just needed setting up; that's all. So, I got it set up.

That said, there is still a slight buzz on one open string and I will deal with that later. For now, I'm playing and recording with this guitar, and sharing the sound of it with adults and teens. They think my Danelectro baritone sounds AWESOME!

I LOVE THIS GUITAR!

BTW--I also have a Danelectro DC3, Gretsch bass, and a Fender American Special Telecaster. Each has a tone of its own. Each is useful to me. The Danelectro '56 Reissue Baritone, however, has already become my favorite!
Read more
12 people found this helpful
Helpful
Comment Report abuse

Robert Knouse
5.0 out of 5 stars Great guitar
Reviewed in the United States on May 8, 2018
Verified Purchase
Stays in tune really well...plays great..sounds great..looks great..great price...i work with many pros who really liked it too...i use it live...and it rocks...even audience people have commented on it..
Read more
3 people found this helpful
Helpful
Comment Report abuse

D. Stover
5.0 out of 5 stars A keeper !
Reviewed in the United States on January 16, 2015
Verified Purchase
This was given to me as a gift from my dearest fellow-musician friend. I always wanted one of these , probably the most under used guitar ever produced, the Baritone Guitars have an incredibly unique sound, with endless tuning possibilities. The Danelectro's have a vintage sound and feel all their own, I have a Danelectro Longhorn Bass that I would never part with. For recording and gigs, this Danelectro reissue is a keeper.
Read more
6 people found this helpful
Helpful
Comment Report abuse

Kindle Customer
5.0 out of 5 stars Affordable Baritone Guitar.
Reviewed in the United States on May 1, 2018
Verified Purchase
We bought this as a gift and the recipient is very pleased with the guitar. It is a good buy.
Read more
One person found this helpful
Helpful
Comment Report abuse