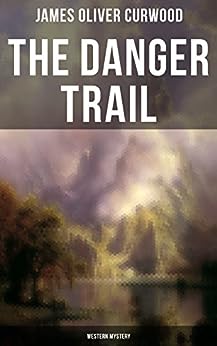 The Danger Trail (Western Mystery): A Captivating Tale of Mystery, Adventure, Love and Railroads in the Wilderness of Canada Kindle Edition

James Oliver Curwood, (June 12, 1878 – August 13, 1927), was an American novelist and conservationist. A great number of his works were turned into movies, several of which starred Nell Shipman as a brave and adventurous woman in the wilds of the north. Many films from Curwood's writings were made during his lifetime, as well as after his passing through to the 1950s. In 1988 French director Jean-Jacques Annaud used his 1916 novel, The Grizzly King to make the film The Bear. Annaud's success generated a renewed interest in Curwood's stories that resulted in five more films being produced in 1994 and 1995.

Karl JanssenTop Contributor: Fantasy Books
1.0 out of 5 stars Moronic mystery in Manitoba
Reviewed in the United States on January 9, 2020
Michigan author James Oliver Curwood specialized in the writing of Northwesterns, a genre comprised of wilderness adventures set in Canada and Alaska. In this genre, Curwood was second only to Jack London in terms of popularity and financial success. His 1910 novel The Danger Trail, however, gives no indication that such success was deserved. This mystery adventure novel set in northern Saskatchewan and Manitoba is an irksomely tedious and witless affair.

After years of hard work, engineer John Howland finally gets his big break when he is hired to manage the completion of the Hudson Bay Railroad. Construction on this railway across Manitoba from Le Pas to Churchill began in 1910, but you won’t learn that from Curwood’s book because it has very little to do with the actual railroad. The novel opens with Howland, a Chicago native, reporting for duty in Prince Albert, Saskatchewan. There he meets a beautiful and mysterious woman named Meleese, a damsel in distress who asks for his assistance. She lures him into the woods, where he is jumped, knocked unconscious, and tied up by a gang of thugs led by a shifty Frenchman named Jean Croisset.

This sort of thing happens to Howland not once but four or five times over the course of the novel. Through chapter after chapter of capture and escape, he occasionally encounters Meleese, who tells him he must return southward, or he will be killed. He repeatedly asks her what she means. Who wants to kill him and why? She refuses to answer, and Howland seems OK with that, as he never presses her enough to get a satisfying response. It is not OK for the reader, however, who has to sit through these monotonous and unproductive exchanges. Howland refuses to run from his persecutors and instead decides to pursue them into northern Manitoba. From there, most of the story consists of altercations between Howland and Croisset in which the two relentlessly threaten each other with “I will kill you,” yet neither manages to make good on his promise.

Howland may be a macho he-man outdoorsman and pugilist, but when it comes to love he is as virginal and ingenuous as any heroine of a Harlequin Romance novel. He falls in love with Meleese at first sight, even though she keeps luring him into deadly traps. There is no conflict between the two characters, no snappy banter or sexual tension. Like a stray lamb, he simply devotes himself to her from the start, blindly and blandly.

Curwood doesn’t seem to realize that there is more to building suspense than simply keeping the reader in the dark. He doesn’t parcel out any clues, so the reader simply has no idea what is going on until all is explained in the second to last chapter. Even that explanation turns out to be a bust when the motivation for all this abduction and violence proves totally pointless. Other than maybe one or two well-written fight scenes, The Danger Trail really has nothing going for it. I have read Hardy Boys mysteries with more complex and intelligent plots.

Curwood has written better books than this, among them The Gold Hunters and The Alaskan. His work is nowhere in the same league with London’s, however, and this book is far inferior to the Northwesterns of Stewart Edward White (The Blazed Trail) or Harold Bindloss (The Lure of the North).