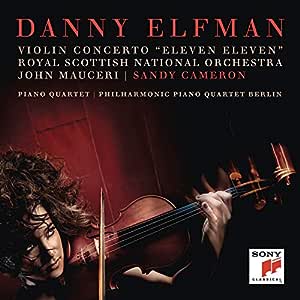 Danny Elfman's music is known to millions, and in addition to his more than 100 film scores, he writes music for the concert hall. About this project, he writes: Most people know me as a film composer. A few years ago I came to the conclusion that I didn't just want to write orchestral music totally free from the influence of film, I virtually had to in order to keep my sanity. Over the last decade I had done several non-film concert commissions, and each time I found them to be incredibly liberating and relieving. This album includes a newly written Violin Concerto by the famous film composer, recorded for the first time. The second piece on the album, the Piano Quartet, is performed by members of the Berlin Philharmonic Orchestra.

4.8 out of 5 stars
4.8 out of 5
28 customer ratings
How does Amazon calculate star ratings?
Amazon calculates a product’s star ratings based on a machine learned model instead of a raw data average. The model takes into account factors including the age of a rating, whether the ratings are from verified purchasers, and factors that establish reviewer trustworthiness.
Top Reviews

Dr. Debra Jan Bibel
TOP 1000 REVIEWER
4.0 out of 5 stars A Grand Change of Direction
Reviewed in the United States on May 14, 2019
Verified Purchase
Danny Elfman is best known as a prolific composer of major offbeat film scores, such as the Tim Burton's Beetlejuice, Nightmare before Christmas, Alice in Wonderland, and Edward Scissorhands, and Hellboy, Batman, Justice League, Dumbo, but also Milk and Mission Impossible (and the theme to The Simpsons). Elfman began as a rock musician: The Mystic Knights of the Oingo Boingo. His classical works are a new venture, having pushed into his 60s and needing a change in his musical development. One would thereby expect that his Violin Concerto would be somewhat cinematic, romantic and dramatic, or full of edgy, suspenseful moments; it isn't. Challenged to write the concerto for Sandy Cameron, who performs here, Elfman sought guidance in the examples of Prokoviev, Tchaikovsky, Shostakovich, and Stravinsky, and indeed the first and fourth movements have the sweep of a great romantic work. The piece is 1,111 measures long (hence the subtitle). The two inner movements, however, are more modern in scope. The second movement, influenced by Philip Glass and especially the Hitchcock scores of Bernard Herrmann, includes a cadenza characterized as a dialogue of violin and the percussion section. The slow third movement begins sparse and develops lyrically with touches of unease and sadness. The concerto concludes with some spunk and irony (eh, Igor and Dimitri?). Elfman worked closely with Cameron to write technically difficult and diverse parts for the violin; together they have produced a grand, certainly to be popular concerto with something for nearly everyone.

The real surprise of this album is the chamber work, a piano quartet. Elfman was definitely in a strange place when asked to consider the task, but the inclusion of a piano provided some freedom. The 5-section piece, performed by members of the Berlin Philharmonic and pianist Markus Groh, is remarkably complex, classical, and modern with no traces of movie styles. Elfman, however, reaches back to childhood in the second movement with the sing-song taunt we all know, probably the first to do so for a classical composition. Elfman was at the time groovin' with the Shostokovich quartets and he must have been inspired. Elfman is a brilliant autoditact, and this new direction ("to keep my sanity," he wrote) is to be applauded.

Mike Morrison
5.0 out of 5 stars Magnificent performance!
Reviewed in the United States on April 8, 2019
Verified Purchase
Having attended a live performance by this same soloist and orchestra, I found and ordered this CD.

The concerto is large, lyrical, and bombastic, and the performance is electrifying. The booklet contains marvelous information about the composer, the soloist, and the process which led to the composition. The recording itself is rich and full, given the difficulty of pitting a solo violin against a very large accompanying orchestra.

At one point in the second (of four) movements, the solo violin duels with a percussion section of six players. It's both eerie and amazing. At other points, this is the most savage violin playing I've ever herd, and I'm really old.

If you favor violin concertos or large scale orchestral works or clear, powerful, modern recordings, get this CD!

A. Film LoverTop Contributor: Classical Music
TOP 500 REVIEWER
4.0 out of 5 stars Elfman goes classical
Reviewed in the United States on October 16, 2019
Verified Purchase
No, it is not the second coming of anything, really. It's nice to see film composers branching out into classical music - this is not, however, a new thing - it's been going on for a very long time. Those other film composers who also did classical only wish they had Mr. Elfman's machine behind them. They didn't and therefore some really brilliant music languishes in obscurity.

I thought the concerto was okay - enjoyable in certain ways, but, for me, it doesn't really hang together into quite a cohesive whole. Of course, Mr. Elfman's fans will love every second of it - I like Mr. Elfman's music sometimes, but I'm not rabid about it. The quintet was more interest and more than a little Herrmannesque, which is always fine by me. And a little Glass, too (Philip, not Paul, well maybe even some Paul). The entire affair is, as is the fashion today, mastered too hot, as if it were a rock record. It's not. So, if you're a fan, it'll probably be for you. If not, I'm not sure what you'll make of it. I do admire anyone who sets out to do a thing and does it.
Read more
One person found this helpful
Helpful
Comment Report abuse

old and in the way
5.0 out of 5 stars Suspenseful delight
Reviewed in the United States on April 8, 2019
Verified Purchase
Thank you Danny Elfman. Thank you for renewing my faith that beautiful music can still be composed in the 21st century.
Brazen percussion theme throughout while Sandy Cameron attempts to set her violin on fire and elements of Mr. Elfmans familar tone are ever present. Not sure what the number eleven represents but I cant wait for twelve.
Read more
2 people found this helpful
Helpful
Comment Report abuse

DWODenver
5.0 out of 5 stars A stunning piece
Reviewed in the United States on June 18, 2019
Verified Purchase
Beautifully performed. Unlike much modern classical pieces, this one is melodic, dramatic, surprising and, yes, even funny.
Read more
One person found this helpful
Helpful
Comment Report abuse

John F. Bundy
5.0 out of 5 stars Another side of Elfman
Reviewed in the United States on August 11, 2019
Verified Purchase
New item, no problems.
Read more
Helpful
Comment Report abuse

annie M.
5.0 out of 5 stars Anything Elfman is Great
Reviewed in the United States on August 13, 2019
Verified Purchase
Love!
Read more
Helpful
Comment Report abuse
See all reviews from the United States

I. Thomson
5.0 out of 5 stars Incredible
Reviewed in the United Kingdom on June 13, 2019
Verified Purchase
This an incredible recording. Very enjoyable.
Read more
Helpful
Sending feedback...
Thank you for your feedback.
Sorry, we failed to record your vote. Please try again
Report abuse

vanguy
5.0 out of 5 stars Contemporary violin concerto and piano quartet
Reviewed in Canada on May 5, 2019
Verified Purchase
There's high wire excitement on this "CD of the week" on "In Concert" CBC radio's Sunday program. Danny Elfman tried his composers hand at a concerto and it's a winner. Sandy Cameron the violin soloist provides a dynamic performance. The Philharmonic Piano Quartet Berlin provide a wonderful performance to this new work.
Read more
Helpful
Sending feedback...
Thank you for your feedback.
Sorry, we failed to record your vote. Please try again
Report abuse

Thomas J. Sheridan
5.0 out of 5 stars "Simpsons" Composer Writes Violin Masterpieces
Reviewed in Canada on May 9, 2019
Verified Purchase
Famed "Simpsons" composer and former band member has turned to his classical music training to show in his Violin Concerto and piano trio great skill in blending klezmer and modern, with some homage to Prokofiev and Shostakovitch. Scottish National Orchestra and violinist
Read more
Helpful
Sending feedback...
Thank you for your feedback.
Sorry, we failed to record your vote. Please try again
Report abuse