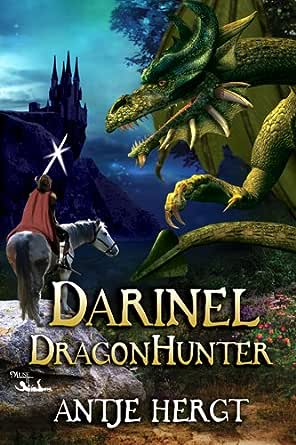 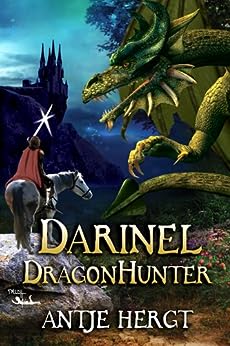 4.9 out of 5 stars
4.9 out of 5
11 customer ratings
How does Amazon calculate star ratings?
Amazon calculates a product’s star ratings based on a machine learned model instead of a raw data average. The model takes into account factors including the age of a rating, whether the ratings are from verified purchasers, and factors that establish reviewer trustworthiness.
Top reviews

NW Harris
5.0 out of 5 stars An awesome tale--Absolute Must Read!
Reviewed in the United States on October 10, 2013
Verified Purchase
Okay, let me just come right out and say, I love dragons. So this title and cover hooked me off the bat. And what I love more than the typical, enraged man-eating type of dragon is the dragon's that are actually old and wise creatures, mazes so-to-speak. To my immense delight, Hergt is fond of those ancient fire-breathing intellects as well.

The story starts off with Darinel, a prince who is in line for the throne but doesn't agree with the harsh ruling policies of his father. Refusing to take the throne and become a cruel king like his father, Darinel sets out to find a new home, surrendering his kingdom to his younger brother and risking banishment for life.

This story has its roots in the classic medieval style dragon-slayer tale--Darinel finds a kingdom he'd love to make his home, and a princess he can marry to gain a foothold in the ruling class of that kingdom. But he has to slay a dragon to gain her hand in marriage. Much better than those stories where the dragon is a heartless evil creature that you want to watch die, this dragon is a misunderstood storyteller that I fell in love with from the first chapter where it was introduced.

unicorngirl
5.0 out of 5 stars More Than Amazing
Reviewed in the United States on August 31, 2013
Verified Purchase
Do you know what I find amazing about this book? More than the effective development of the characters, more than the fine craftmanship of its writing, more then the delightful fairytale style plot? It's that the author, Antje Hergt, is German! Yes, that's right - German, as in it's her first language. Yet she can write a story just as well as the next anglophone. And I find that astonishing! But I also fell in love with the dragon because he loved to weave stories and serve tea. I mean, how endearing! Serve tea. I can't wait for Antje Hergt's next novel. This was an absolute pleasure to read.
Read more
Helpful
Comment Report abuse

Madeleine McLaughlin
5.0 out of 5 stars Surprises At Every Turn
Reviewed in the United States on June 28, 2014
Verified Purchase
This story has twists and turns that you won't recognize from other fairy tales. The characters are warm and lovely and the dragon, a joy. A good read for young people.
Read more
Helpful
Comment Report abuse

Angie Lenkevich
4.0 out of 5 stars Power of Friendship
Reviewed in the United States on September 30, 2013
Prince Darinel is unhappy with his life at court. He would rather go out on adventures and explore new ways of ruling instead of his father's teaching. He would also like his brother to take his place as heir to the throne. Prince Darinel speaks his thoughts to his father which ends in the two fighting one another. Prince Darinel announces he's leaving first thing in the morning. Much to Queen's dismay, Darinel is leaving yet she wants him to stay understands his desire to go. Darinel travels far from his home kingdom to a kingdom that has unusual secret. Princess Tuskja wants to learn more about healing because it's her passion. Yet the ladies of court look down their noses at Princess Tuskja's efforts as pointless. She eludes her guards in search for valuable herbs to use in her healing work. The King doean't know what to do with his daughter but he knows one thing the dragon must go. The King decrees that any man who kills the dragon will gain his daughter's hand in marriage. Suitor's from all over try for Princess' Hand only to fail miserably. The Dark Prince is a spurned suitor that wants to take his revenge on The Princess for turning him down. The dragon finds an unlikely friend. Who is the dragon's friend? Will will take up The King's decree? Will Princess Tuskja learn more about healing? What are Darinel's plans? What will The Dark Prince plan now? Your answers await you in Darinel Dragonhunter.

I thought this was incredibly sweet story about the power of friendship no matter the cost. I thought Darinel choosing to leave was a very brave act on his part inspite of his father's demands. I applaud his courage to stick to his plan and accept the consequences as well. The dragon's part in the story was so skillfully woven together that left little doubt to it's importance. The Princess is a very good role model. She's unafraid and willing to stand up for what she believes in. Each of the characters were interesting, thoughtful, generous, and kind at times. I will definitely continue reading more of this author's work.
Read more
One person found this helpful
Helpful
Comment Report abuse

Joycedale
4.0 out of 5 stars Nice reading
Reviewed in the United States on March 30, 2014
Even though I received this from a YA group I think its better suited for preteens. Its a really well written story about a prince and a dragon becoming friends.
I think my favorite thing about it is their way of speaking is more modernized, for example the prince refers to his fathers way of ruling as "old school". I think because of this younger people will enjoy it as it makes it easier to read.
The prince leaves/is exiled from his kingdom and after travelling finds another one to settle in. The king has made a decree that whoever kills the dragon will marry his daughter. Darinel has no desire to this this but the princess dares him and he can't refuse. His first trip up the mountain he meets the dragon and they become best friends. He of course has to keep this hidden, even from the princess who he is falling in love with. When the kingdom he's in has war declared on it Darinel is recruited to help.
This is the first book in a series but I think it could be read as a stand alone since this adventure seems to come to a close at the end.

I was given this copy by the author in exchange for a honest review. Thank you.
Read more
Helpful
Comment Report abuse

Erika
5.0 out of 5 stars A Prince, a Princess and a Dragon
Reviewed in the United States on October 9, 2013
Antji approached me for a review swap and I'm thrilled I agreed. I'm becoming a fan of YA fiction.
This is an incredibly well told story with believable characters and a loveable villain. But then again, do dragons has to be villains? I love the big, feared dragon, Idunal.

The hero, Darinel is a gutsy prince that I admired from the first chapter on. He isn't afraid of the unknown or pushing the limits

Tuskja is no ordinary princess, possessing healing powers which the prince seems to need, regularly.

I loved this book from start to finish. Highly recommend.
Read more
Helpful
Comment Report abuse
See all reviews from the United States

Alex Zahara
5.0 out of 5 stars Darinel Dragonhunter is a wonderful book!!
Reviewed in Canada on July 4, 2014
Verified Purchase
This book is great for young readers as well as adults who want to experience a sense of adventure and wonder that also has a tense storyline. The book moves at a good pace and always leaves you wanting to read on at the end of every chapter. The characters and world the author has created is well formed and you can really picture it in your minds eye. The character development is excellent which results in the reader really caring about all the characters and being transported into the world of the author has created. There are some great storyline points that are new to the genre and very inventive, at no point did I ever feel like I was reading a "kids" book, I felt like I was reading an enticing adventure. I highly recommend Darinel Dragonhunter and look forward to the next in the series!
Read more
Helpful
Sending feedback...
Thank you for your feedback.
Sorry, we failed to record your vote. Please try again
Report abuse