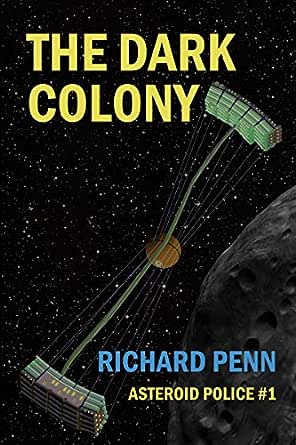 You've subscribed to Asteroid Police! We will preorder your items within 24 hours of when they become available. When new books are released, we'll charge your default payment method for the lowest price available during the pre-order period.
Update your device or payment method, cancel individual pre-orders or your subscription at
Your Memberships & Subscriptions
There was an error. We were unable to process your subscription due to an error. Please refresh and try again. 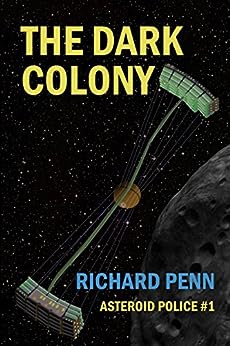 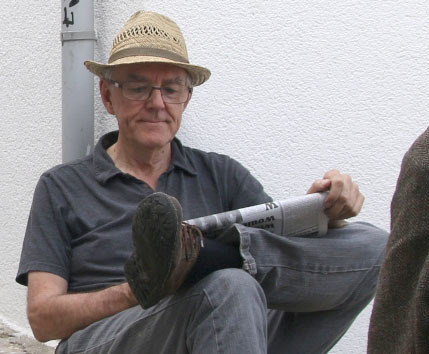 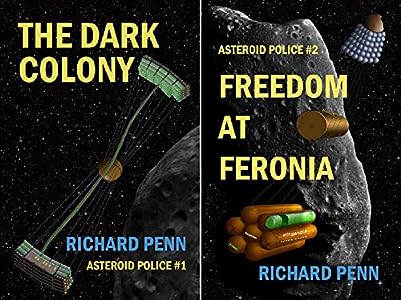 Starting with a degree in Ergonomics, I moved into the High Tech world in the seventies, emerging relatively unscathed twenty years later. I was around when the profession of User Interface Designer had invented itself, and it provided me with a decent living in Canada. I left that business in the late nineties, before the tech bubble burst, going freelance to write custom software for a number of small firms. Now I've retired from all that and moved back to England. I live in the summer on my narrowboat "Delta Vee" (for the uninitiated, that's the rocketry term for a "change in velocity", many narrowboat names refer to slowing down). The winters, I live in a up north, near Hexham. I have two lovely daughters, one a psychologist and the other a veterinary nurse. Since reading early science fiction as a teenager, especially the books by Robert Heinlein, I have been obsessed by humanity's future as a space-dwelling species. The non-fiction book "A Step Further Out" by Jerry Pournelle revealed the serious challenges to this idea, and got me thinking about ways of overcoming them. Several ideas and years of calculation later, I had a detailed simulation of the colonisation of the Solar System, with named individuals travelling about under the control of a realistic simulation of the motion of the various lumps of rock that fly about up there. Turning the simulation into anything other than a vastly expanded virtual train set was the challenge. This book is an attempt at that. If you spend all your spare moments in a complex imaginary world, you can be considered insane. Unless you share it with some other people, then you are an author. The big questions people ask when I talk about this world are: why would anyone want to go, and why wouldn't it turn into wild-west chaos. I've found there is no short answer to these questions, and fiction seems like the best way to address them. The "why" question seems so obvious to me I can't assemble arguments to it. The "peace" question is so broad, it's going to take several books for me to answer it to my own satisfaction. --This text refers to the paperback edition.

C. McMullen
4.0 out of 5 stars Enjoyable Near Space Mystery
Reviewed in the United States on January 12, 2015
Verified Purchase
This was an enjoyable hard sci-fi read. While it is clear that the author took great pains to keep the technology in the realm of theoretically realistic, he did so in a way that did not sacrifice storytelling. This is a story that even those of us without a background in aerospace engineering can follow.
Lisa, the main character, is well developed and likeable. She isn't perfect and when she finds herself leading an investigation that is beyond anything she has dealt with before, she does not develop sudden magical skills, she asks for help. In a genre where most space jockeys are swaggering heroes without flaw, Lisa is refreshingly real.
My only criticism, and this seems to be the consensus of other reviewers, is that the antagonists are not developed. I do understand that this is the first in the series and not the last we will see of them, but I would like to have seen some more of what their motive was for forming the rogue colony. At first they seemed like simple smugglers, but then it seemed as if they had more of a political agenda, yet in the end, we know nothing of their true motives.
Overall, it was a great story that would appeal to fans of colonization sci-fi. I look forward to continuing the series.

Chris Gerrib
3.0 out of 5 stars Interesting but flawed execution
Reviewed in the United States on March 20, 2015
Verified Purchase
I first heard of Richard Penn via another reviewer, who made an off-hand comment about Penn’s second book, Freedom at Feronia. Since both books were $3.99 ebooks, I bought them and read them in order. My overall assessment is merely okay.

The Dark Colony, today’s book, is set on a colony orbiting the very real asteroid Terpsichore. Our heroine, Lisa, is an 18-year-old junior cop in the very small colony (around 400 people all told) whom, in Chapter 1, finds a dead body. What’s especially shocking is that said dead body is the first stranger Lisa has ever met.

Thus begins my many, many heartburns with the book. Penn, in an attempt to be realistic, has kept his travel between points in space slow – arguably too slow, and too infrequent to support a realistic economy. I have other world-building issues, such as a colony spun to produce 1/100th of a G gravity.

My biggest heartburn begins when the investigation gets up to speed. Nobody would reasonably expect the police department of a 400-person village to handle a murder all on their own. So they call for help from Mars. But because of the travel issues, Mars is really just computer help and talking heads on a video screen. Yet when Lisa is told by Mars to arrest people she’s known her whole life, she does so without a peep! Moreover, the locals stand for it.

Now, I have to say I found The Dark Colony a refreshing change of pace from typical SF asteroids of late, which seem to be infested with gun-toting libertarians. The economy and politics is much more (realistically, in my view) collectivist. But I do believe than Penn has tossed the baby out with the bathwater in regards to how people would realistically behave. Simply put, if The Authorities can’t actually put boots on the ground (or whatever passes for ground locally) they aren’t really in authority.

I wish I could say that the breathless prose and other stylistic points salvaged the story for me. They don’t. The prose is workmanlike at best, and a fair amount of the dialog is maid-and-butler. I get the feeling that Penn hasn’t ever lived in a small town, which is reflected in his characters. Like much self-published stuff, The Dark Colony is an interesting concept not well executed.
Read more
3 people found this helpful
Helpful
Report abuse

Winchell D. Chung
5.0 out of 5 stars Excellent hard science fiction novel
Reviewed in the United States on July 3, 2016
Verified Purchase
Yes, it starts as a classic locked room murder mystery, but the room is an orbital warehouse of an asteroid colony. The assistant constable of the colony must rise to the challenge as a hidden conspiracy is uncovered. The science of the background is accurate and engrossing. Mr. Penn really makes you feel like you are in deep space.
Read more
One person found this helpful
Helpful
Report abuse

Jim Sealy Jr.
5.0 out of 5 stars You'll be looking for the rest of the series
Reviewed in the United States on November 3, 2014
Verified Purchase
Nice to see an author writing hard sci-fi detective adventure stories in the believable near future. Lisa reminds me of Lije Bailey as she's forced to step out of her comfort zone and become the reluctant hero.
Read more
2 people found this helpful
Helpful
Report abuse

John Hines
5.0 out of 5 stars Gunsmoke in the asteroids
Reviewed in the United States on July 22, 2014
Verified Purchase
Life of a police constable in the asteroid belt. Locals versus a really bad rich guy.
Read more
2 people found this helpful
Helpful
Report abuse
See all reviews

Tales of a Librarian
4.0 out of 5 stars Deep space police procedural with extra grit
Reviewed in the United Kingdom on January 11, 2015
Verified Purchase
A page turning police procedural set in deep space. This is well paced and gripping and I can honestly say I haven't read anything else quite like it. Instead of allowing almost 'magical' tech, this is based on very real practicalities involved in space travel. Time and distance really mean something - no lightspeed, no WARP drive, no teleportation...no one to call for help when the situation spins out of control...

While I may have liked the paranoia of having a killer aboard an enclosed environment, like a space station, with no hope of outside help, explored a bit more fully, Penn does and admirably job of steering us through some very dark waters in an action packed space thriller that also bows to the laws of hard sci-fi.

The characters are well drawn and engaging. The pacing is fairly tight. I definitely would read a sequel and I recommend it to all fans of the genre. An impressive début and who the hell cares that it's self published. Cream rises to the top as well!
Read more
One person found this helpful
Report abuse

Mr. T. O. Womack
5.0 out of 5 stars Something that hasn't been done for a long time
Reviewed in the United Kingdom on December 29, 2014
Verified Purchase
A near-future hard-science view of solar system colonisation, of the kind that hasn't been done this well since the sixties. Also to some extent a Scandinavian detective novel, an interesting combination of police procedural and moments in life in space. There are a few quibbles - maybe sensational murders involving a fugitive billionaire ought to have attracted the attention of the billions on Earth rather than the hundred-thousands on Mars - but it was a fine read.
Read more
One person found this helpful
Report abuse

Iain Scott
4.0 out of 5 stars Good stuff!
Reviewed in the United Kingdom on November 20, 2014
Verified Purchase
Enjoyable hard SF action... erm.. police procedural? In the absence of much established procedure? I might quibble a bit with some aspects of the world building (what is the economics driving the survival and expansion of the asteroid colonies?), but it is refreshing to see SF which seems to respect such concepts as "rule of law", "human rights" and "democracy", as opposed to assuming all government in confined, hostile environments will automatically devolve in to neo-feudal autocracies. Good stuff!
Read more
One person found this helpful
Report abuse
See all reviews