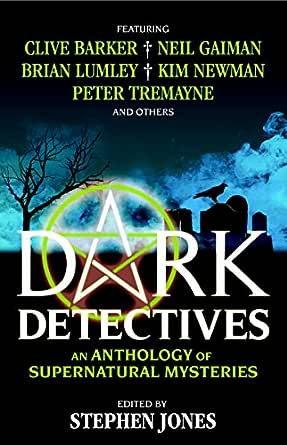 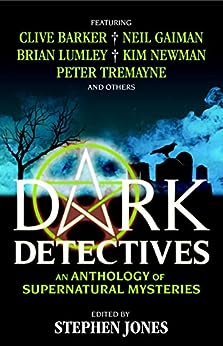 Stephen Jones is a leading expert in horror. A prolific editor, he is also the recipient of numerous awards including the World Fantasy Award, Bram Stoker Award, and Hugo Award. --This text refers to the paperback edition.

3.8 out of 5 stars
3.8 out of 5
12 global ratings
How are ratings calculated?
To calculate the overall star rating and percentage breakdown by star, we don’t use a simple average. Instead, our system considers things like how recent a review is and if the reviewer bought the item on Amazon. It also analyzes reviews to verify trustworthiness.
Top reviews

Peter S. Bradley
TOP 1000 REVIEWER
5.0 out of 5 stars The stories have a nice variety - a strong introduction to characters and series that seem to be worth reading.
Reviewed in the United States on May 13, 2017
Verified Purchase
This is an extremely good collection of stories bound together by the theme of a detective dealing with something that appears to be supernatural. I particularly liked the historical angle to the collection. The editor, Stephen Jones, opens the collection with an overview of the history of stories dealing with the "detective and demons" or "detective and ghosts" trope. The essay starts with an acknowledgment of Edgar Allen Poe's detective C. Auguste Dupin and then proceeds to move into the supernatural detective stories of the nineteenth century and beyond, bringing us up to the current time.

I recommend reading this essay in order to appreciate the collection because many of the stories adopt the characters mentioned in the essay and one was written in 1913.

‘Seven Stars Prologue: In Egypt’s Land’ by Kim Newman - A nice feature of the book, which helps with the historical feel of the book, is the Kim Newman stories about the "Seven Stars Jewel." The jewel has some unusual properties. The Newman stories involve episodes set in the 1890s, 1920s, 1950s, 1970s and the 21st century as related characters deal with the threat posed by the jewel.

‘Our Lady of Death’ by Peter Tremayne - This is a "Sister Fidelma" story. Tremayne has written several books about this ninth century Celtic nun who solves crimes. This is a well-written mystery, but it has more of a "Scooby Doo" approach than a truly supernatural story.

‘Seven Stars Episode One: The Mummy’s Heart’ by Kim Newman.

‘The Horse of the Invisible’ by William Hope Hodgson. Originally published in Carnacki, The Ghost-Finder (1913) - This is well-written, but it is in an older, more formal writing style. Like the Sister Fidelma story, this is more "Scooby Doo" than supernatural.

‘Seven Stars Episode Two: The Magician and the Matinee Idol’ by Kim Newman.

‘The Adventure of the Crawling Horror’ by Basil Copper - This story features Solar Pons, a character that August Derleth created to totally rip-off Sherlock Holmes. After Derleth, Basil Copper apparently used the character. This is a decent mystery story, albeit more "Scooby Doo."

‘De Marigny’s Clock’ by Brian Lumley- After the Wellman story, the collection moves into real supernatural territory. This story is well-done and introduces Titus Crow, a character that I am interested in reading more of.

‘Someone is Dead’ by R. Chetwynd-Hayes - This is actually a decent story, but I didn't particularly like the main characters. The story had a 1970s feel to it.

‘Vultures Gather’ by Brian Mooney - Like the Lumley story, I found myself attracted to the detective character, Reuben Calloway, in this one. The story is good and there is definitely a mystery to be solved. On reflection, it occurs to me that the character of the detective - whether he has tics and quirks that entertain - are essential to a mystery story, even the supernatural variety.

‘Lost Souls’ by Clive Barker. Henry D'amour is a detective who kills demons. Scott Bakula played the character in the movie "Lord of Illusions." I think I will check that movie out.

‘Bay Wolf’ by Neil Gaiman - Gaiman does a short epic poem where the Wolfman meets the Creature from the Black Lagoon.

I enjoyed all the stories. The stories had a nice variety. It was a nice introduction to characters that I have somehow missed in nearly 50 years of reading science fiction and fantasy.
Read more
3 people found this helpful
Helpful
Comment Report abuse

Alien Warrior Woman
5.0 out of 5 stars Dark Doings
Reviewed in the United States on September 17, 2015
Verified Purchase
It wasn't what I was expecting which was a group of detectives fighting the dark elements. BUT, it was very good after all. It's a a series of stories connected by an event and detectives from well-known writers that are linked in dealing with the event. I do like that the introduction gives you a history, of the stories and original characters, which you really need to read first, I order to get the most out of the tales.

There allusions to famous writer's universes, such as H.P. Lovecraft, there are stories from Clive Barker and Manly Wade Wellma! Among others. It's an unusual anthology but worth the read!
Read more
Helpful
Comment Report abuse

ogecko
2.0 out of 5 stars Disappointing
Reviewed in the United States on December 12, 2015
Verified Purchase
Many - if not most - of the stories included in this book are not about detectives, and a couple of them are not even about the supernatural. Many of the stories are old, and at least one is even in the public domain. It seems like this book is in reality only a vehicle for the 'Seven Stars' stories, which I did not find to be especially interesting or entertaining (and only one of which is actually a detective story).
Read more
2 people found this helpful
Helpful
Comment Report abuse

Paul Lappen
5.0 out of 5 stars Excellent mystery/horror stories
Reviewed in the United States on July 28, 2000
This is a group of mostly newer detective stories. But these aren't your average private eyes; these people del in the supernatural and occult.
Among the authors represented are Clive Barker, William Hope Hodgson, Manly Wade Wellman, Neil Gaiman, Brian Lumley and Basil Copper. In seventh century Ireland, a rural innkeeper and his wife are being terrorized by unnatural noises. A story set in rural England early in the 1900s has a wonderful title, "The Adventure of the Crawling Horror." What looks like a grandfather clock with four hands, and strange symbols where the numbers should be, actually has a much more hellish purpose. Another story has to do with John Wayne supposedly being buried in a pink dress. Kim Newman contributes a multi-part short novel about a fist-sized ruby with the power to destroy mankind.
I am not much of a mystery or supernatural reader, but I really enjoyed these stories. They work as detective stories, and the occult part is sufficiently strange. This is well worth reading.
Read more
11 people found this helpful
Helpful
Comment Report abuse

J. L. Probert
5.0 out of 5 stars Super supernatural adventures
Reviewed in the United States on March 1, 2000
Another splendid anthology from Stephen Jones, this time presenting a chronological collection of detective stories with a supernatural bent ranging from Peter Tremayne's Sister Fidelma through to Clive Barker's Harry D'Amour, with stories by Basil Copper, Ron Chetwynd-Hayes and Jay Russell amongst others along the way. Tying the whole thing together is a serial by Kim Newman - 'The Seven Stars', episodes of which are interposed between the other stories in this collection. Anyone who likes the idea of noirish detective stories embroiled in the murky world of old books, mystical incantations and large unpleasant slimy things living at the bottom of pits will love this. I certainly did.
Read more
9 people found this helpful
Helpful
Comment Report abuse

Amazon Customer
5.0 out of 5 stars Another winning Stephen Jones anthology
Reviewed in the United States on March 13, 2001
Although all the stories collected here involve the same subject, psychic detectives, they are diverse in mood and storytelling. Even if you've read any of these stories before, as I have, it's best to read this collection from cover to cover as a whole. There is also some great stuff here that I'd never heard of before like the Brian Mooney and Jay Russell tales. The whole book is weird fiction, and some of it is quite dark, but Jones places the comic relief at just the right moments. I only wish he would have included one of Seabury Quinn's Jules de Grandin stories; most of which have never been reprinted since their original publication in Weird Tales. Newman's wraparound story alone is worth the price, simply because, like so many great British authors, most of his work hasn't seen U.S. print.
Read more
8 people found this helpful
Helpful
Comment Report abuse

Emmett H
5.0 out of 5 stars Creative compilation of great stories
Reviewed in the United States on August 24, 2013
This is a book for those who like good supernatural fiction. The stories are uniformly good, and the anthology includes a novella that wraps around and weaves through the selections. I had a great time reading this beautifully designed book. Way to go, F & B!
Read more
Helpful
Comment Report abuse
See all reviews

Kindle Customer
5.0 out of 5 stars Crime with a twist
Reviewed in the United Kingdom on July 21, 2019
Verified Purchase
A good selection of short stories. All of them have that nice twist that keeps the story interesting from.start to finish.
Read more
Report abuse