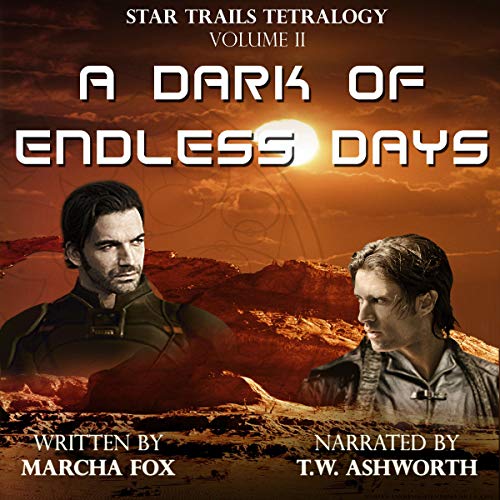 Things are never so bad they can’t get worse. For the Brightstars, they just did. Dirck Brightstar knows his family is in serious trouble. If his father doesn’t finish building the heat exchanger before Opposition’s heat sets in, they’ll all perish. Then what little money they have will be confiscated and his father hauled off to prison in a midnight raid. And it all started because his missing sister, Creena, couldn’t follow the rules.

Unaware of the chaos left in her wake, Creena only wants to get back home. The planet where she hopes to find assistance complicates her situation instead, stranding her on a backward world where evil forces find her wherever she goes. Can this family survive long enough to ever be together again?

Special invitation from Audible!
Learn more about Membership
List Price: $24.95
You Save: $3.12 (13%)
By completing your purchase, you agree to Audible’s Conditions Of Use
Sold and delivered by Audible, an Amazon company
Share

Erika
5.0 out of 5 stars A well written book that will not disappoint.
Reviewed in the United States on August 6, 2014
Verified Purchase
A Dark of Endless Days by Marcha Fox is volune two in the Star Trails Tetralogy. This segment picks up exactly where volume one stopped. The Brightstar family is living on Cyraria-a hot dismal planet with two suns. The blazing heat and high opps creeping up on them they build a cooling system for their ballome and consider heading for cooler ground. Merapa always one step above the law isnâ€™t so fallible and Creena gets stuck on Earth. Her opinions about earth and the descriptions of Earthlings and our society sent me into fits of laughter. A couple new characters drop in on this volume, a bnolar and Win- a friend of Dirckâ€™s to make this story an ever increasingly interesting read.

Fox once again does an exceptional job building character and making her created universe a reality. I canâ€™t turn a page without picturing the story in my mind and visualizing each character. With each novel in this series I read I find myself cringing on the edge of my seat, laughing out loud, and worried for each character. She gives the reader a bang for their buck.

A well written book that will not disappoint.
Read more
One person found this helpful
Helpful
Report abuse

The Book Dragon
5.0 out of 5 stars A family in peril! Great sci fi!
Reviewed in the United States on November 25, 2017
Verified Purchase
4.5 for this second installment in the Star Trails Tetralogy. It took me a little while to get into this one, mainly because it was more difficult to connect with Dirck than I had with Creena in book 1, but the suspense grows tighter and tighter as the story progresses, leaving the entire Brightstar family in dire peril! The ending will definitely make you want to dive into book 3 to find out what happens to them! Recommended for science fiction fans of all ages.
Read more
One person found this helpful
Helpful
Report abuse

Amazon Customer
5.0 out of 5 stars This is a story about what endures when technology fails.
Reviewed in the United States on February 10, 2015
Verified Purchase
In THE DARK OF ENDLESS DAYS, Book II of the STAR TRAILS TETRALOGY, the author, Marcha Fox, takes us deeper into the lives of the Brightstar family and their personal expressions of communal love. Torn apart by diabolical political forces, the Brightstars commitment to reuniting the family almost seems hard-wired in their brains. The validity of this commitment is not questioned because this type of allegiance is familiar to most of us. It's something primal in our souls, a feeling buried so deeply within us that it is beyond words. Commitment to family gives us comfort, especially as children. It gives us security and keeps fear at bay while subtly suggesting, "As long as we all are together, everything will be okay."

Two generations of Brightstars play off each other in sharp contrast and they approach life's problems in different ways. The older, or experienced, generation consists of Laren and Sharra. Laren, the patriarch of the family, is the linchpin that holds them all together and he sets the bar high for his children. To me, Laren is the most interesting character in the book. He is the exhausted yet tireless hero-in-chief and the wisest among men. I want to know more about his life and his extraordinary gifts and skills. If Laren has any weakness, it's for his darling wife, Sharra. From the reader's prospective, Laren appears to protect her from the harsher realities of their situation and I wonder why. Sharra is the silent martyr in the story; she is ever present, yet reserved or distant and unknowable. I would like to see Sharra's character developed a bit more. She certainly deserves a breakthrough moment where she feels her strength.

The younger, or untested, generation consists of the teenagers, Creena and Dirk Brightstar. Creena seems the antithesis of her mother. Creena is direct, rebellious, opinionated and highly evolved and Dirk is petty and somewhat of a bully. While Creena's spaceship lands on our favorite, familiar planet, the rest of the Brightstars are stranded on the toxic planet of Cyraria and doing their best to stay alive.

Dirk, Laren's older son, takes on a larger role in this book. Abrupt changes in the family dynamics leaves Dirk feeling unprepared when he realizes his commitment to family has put him into a position of caring for his mother and little brother, Deven. When crisis after crisis strike, Dirk struggles to fill his father's shoes, but Dirk's optimism shrivels to hopelessness as their technology fails to serve them.

Despite Dirk's lack of confidence, he is the only family member that questions his father's motives. If Dirk is the young hero of this story, he must question the assumptions of the previous generation and find better ways of coping with the problems at hand. It's not that Dirk mistrusts or dislikes his father, if anything Dirk is in complete awe of the great Laren Brightstar. The trial of questioning our assumptions and motives of the past takes great courage and is a crucial test along the hero's journey. Adulthood usually comes in drips and dabs, yet defining moments arise when the hero realizes the future is upon him and he must act. "Hold onto 16 as long as you can, changes come around real soon, make us women and men."* (*John Mellencamp). With adulthood come new powers, but the powers are useless until the hero takes responsibility for his actions. When the hero learns to weigh his intentions, it will define the parameters of his integrity and he will own his power. Despite all the hurdles the Brightstars face, the challenge of gaining their power and using it properly will decide all their fates.

This is a story for our times, about what endures when technology fails, the climate turns toxic, and we are out of luck. Despite the injustices suffered, despite the petty differences between Creena and Dirk and the light years separating the Brightstars, their loyalty to family never wavers. They are sustained by the belief that, "No problem is insurmountable as long as long as they are together." No human animal thrives alone. Our connections are not always obvious, because the spirit of community is deep within our entwined roots.

The irony in the Brightstar family becomes apparent as the family reacts to their immediate struggles. Their definition of family must burgeon to encompass more than genetic similarities. When help is needed, humans make friends and learn the meaning of trust. Some of these friends don't look like us and have beliefs different from our own, but family is intangible and made of more than genetic material. Family is made of commitment and loyalty to life.

Marcha Fox has a nice writing style and she sneaks little science lessons into her stories. Although her audience is "young adult," there is nothing childish in her books and they are enjoyable to a wide spectrum of adult readers too. I thoroughly recommend the Star Trail Tetralogy. What a great read for these cold winter nights!
Read more
One person found this helpful
Helpful
Report abuse

Judith Victoria Douglas
5.0 out of 5 stars A true Sci-fi
Reviewed in the United States on May 28, 2014
Verified Purchase
In the vein of old science fiction literature this story could end up as another classic. Its original, with all the components, technology, other world and races, and a contact with Earth. It also has tension and conflict, though mostly emotional and interpersonal, not ray guns. The characters are wonderful and real, and the only thing that disappointed me was that it was another "to be continued" story. If you are willing to follow a series then you will not be disappointed with this one.
Read more
One person found this helpful
Helpful
Report abuse

The Fury Zone
4.0 out of 5 stars A great sci-fi adventure for all ages
Reviewed in the United States on September 21, 2016
Following directly on from book one, this second novel in the Star Trails series continues the adventures of the Brightstar family as they fight against the odds to become united once more. With the necessary ‘world building’ out of the way in book one, the second is free to plunge headlong into the adventure, pitting the family members against a variety of dangers, some human, some alien and some just nature itself. The story flows at a good pace and is well written with descriptions that are rich and vivid but never too dense as to be detracting. The story mainly centres on how the disparate parts of the family adapt to their changing environments rather than being an action oriented adventure, however, when the action scenes do come, they are tense and exciting, with a genuine sense of urgency.

Out of all the characters’ story arcs, I enjoyed Creena’s the most as she is without a doubt the most fully realised and sympathetic character in the story - her pain at the separation from her family felt very real and honest. Being aimed at younger readers, the story concentrates mainly on the younger characters as you might expect, meaning the adults are very much demoted to background characters, and there perhaps lies the only downside for me as I would have liked to have learned a little more about Creena’s parents. Perhaps this will be addressed in later books.

Even though the book is primarily aimed at younger readers and is therefore ‘clean’ and free of graphic violence, there is enough story depth and characterisation to appeal to sci-fi fans of all ages - I am fifty myself. So if you would like to lose yourself in a fascinating otherworldly adventure, I can heartily recommend this book. Well done.
Read more
One person found this helpful
Helpful
Report abuse
See all reviews
Back to top
Get to Know Us
Make Money with Us
Amazon Payment Products
Let Us Help You
EnglishChoose a language for shopping. United StatesChoose a country/region for shopping.
© 1996-2021, Amazon.com, Inc. or its affiliates