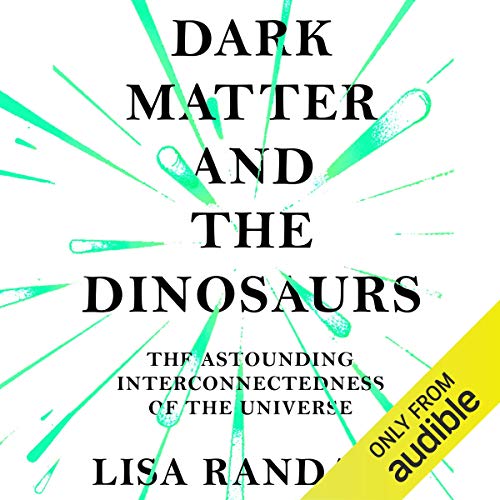 Dark Matter and the Dinosaurs: The Astounding Interconnectedness of the Universe

4.3 out of 5 stars
4.3 out of 5
453 global ratings
How are ratings calculated?
To calculate the overall star rating and percentage breakdown by star, we don’t use a simple average. Instead, our system considers things like how recent a review is and if the reviewer bought the item on Amazon. It also analyzes reviews to verify trustworthiness.

Randolph Eck
5.0 out of 5 stars Who would have thought?
Reviewed in the United States on March 27, 2017
Verified Purchase
This is another very interesting book by Lisa Randall, theoretical physicist at Harvard University. The book is divided into three main parts: The Development of the Universe, An Active Solar System, and Deciphering Dark Matters Identity.

In the first part, we are introduced to this thing called dark energy – something that remains constant over time as the universe expands. That's why this type of energy can be called a cosmological constant. We can determine the existence of this stuff via gravitational lensing, the characteristics of the Bullet Cluster, supernovae measurements, and the study of the microwave background radiation.- all explained by Randall. This is important stuff, because dark matter makes up 69 percent of the energy in the universe. We are also given here a history lesson on the universe starting with the Big Bang, for which the author provides us with ample evidence of the event's occurrence. Later, we see the development of stars and galaxies, and how the competition of radiation and matter brought this about. Dark matter also played an important role here.

In the second section, we get an introduction to meteors, asteroids, comets, and the planets. Associated with these objects are the Kuiper belt and the Oort cloud. There is an excellent primer on how to determine the edge of the Solar System, and an introduction to near-Earth objects. The discussion continues into the five major extinctions that have occurred starting with the Ordovician-Silurian period about 440 million years ago. There were others before this, but these had a major impact on life on Earth. It is the last one, called the K-Pg extinction, that is responsible for the final blow to the dinosaurs, and the author elaborates on this in her book. Actually, it all began with Walter and Luis Alvarez back in 1980 when they discovered a layer of iridium dating back to about 65 million years ago. Over the years, other evidence solidified the findings, such as the discovery of other rare metals, rock droplets called microkrystites, tektites, and other evidence. Eventually the crater at Chicxulub was found clinching the case.

By part three, we are now deciphering the mystery of dark matter. There are a number of possible paradigms for what dark matter is composed of. One prominent candidate are WIMPS. Some others are axions, neutrinos, machos, and asymmetrical dark matter models. Finding the right candidate is the difficult part since “today’s searches rely on a leap of faith that dark matter, despite its near invisibility, has interactions that are sufficiently substantial for detectors built from ordinary matter to register.” We have direct detection method, such as cryogenic detectors, and those that employ noble liquids. Then there are the indirect detections methods that involve looking for the signal that would arise if dark matter particles annihilate with dark matter antiparticles transforming the energy produced into something visible. The author discusses some discrepancies uncovered in the search for dark matter, such as the core-cusp problem, the missing satellite problem, and the too big to fail problem. Further chapters discuss an interesting hypothesis of the author called “double-disk dark matter,” (DDDM) and also something called “partially interacting dark matter,” where you have a small component of the dark matter that interacts through nongravitational forces.

So how is all this related to the dinosaurs? Well, according to the DDDM theory, our galaxy would contain two types of disks, the dark matter disk and the visible matter disk. As the Solar System oscillated through the dark matter disk as we moved through the galaxy, gravitational forces could have slung “comets out of the Oort cloud so that they periodically catapulted into Earth, possible even precipitating a mass extinction.” The Oort cloud is a cloud of icy bodies found beyond Pluto. Who would have known?
Read more
30 people found this helpful
Helpful
Report abuse

Amazon Customer
3.0 out of 5 stars Don't worry, the dinosaurs are coming...
Reviewed in the United States on June 4, 2016
Verified Purchase
Randall eventually talks about the mass extinction event that probably killed most species on Earth - including land-based dinosaurs - in chapter 12. Up until then, be prepared to learn a little bit of everything else, from the beginning of the Universe. The book feels like it is based on a syllabus for a 16-week college course and takes its time getting to the point about each topic.

Three stars because there are several editing issues that are distracting for this reader. The most egregious error I've found is this sentence on page 216 (hardcover edition): "The ejecta fell exactly on the paleontological boundary, confirming that the impact occurred at the " That's the entire sentence! Where is the end of it? And isn't this kind of an important thought to finish, in a chapter discussing a life-ending impact event? Hopefully the publisher will require a second round of proofreading before the paperback is released.
Read more
14 people found this helpful
Helpful
Report abuse

PaulM
TOP 500 REVIEWER
5.0 out of 5 stars What Goes Around Comes Around
Reviewed in the United States on November 2, 2015
Verified Purchase
At one time it was said that Lisa Randall was the most cited theoretical physicist with about 10,000 citations. This is no easy achievement. She has now written a fascinating story about dark matter. Her previous books were: “ Warped Passages ” about the role of extra dimensions and “ Knocking on Heaven's Door ” about the Higgs particle. The latter contained the best explanation of the Higgs that I have read. This new book requires less of a technical background to understand. It is the easiest to read.

“Dark Matter and the Dinosaurs” combines stars, galaxies, comets, meteors, particle interactions, and of course dinosaurs. What could be better? The book is well written and totally fascinating. We know of the existence of dark matter by its effects on ordinary matter, in particular, through the rotational speed of galaxies, and also by its role in the gravitational lensing of light. Dark matter permeates the universe. There is five times as much dark matter as there is ordinary matter. We also think that the dinosaurs died 66 million years ago when a large meteoroid, e.g., comet or asteroid, crashed into the Earth.

Is there a connection between dark matter and the extinction of the dinosaurs? Did a dark matter disk lying in the plane of our galaxy nudge the meteoroid into a collision course with the Earth? As an atomic/nuclear physicist I am captivated by the idea that dark matter may form atom-like objects. Once you have self-interacting dark matter, everything else follows: the galactic disk, period passage of the solar system through the disk, the meteoroid nudge, and the tragic end of the dinosaurs. However, I think that we will have to learn more about dark matter. Satellite observations of the motion of stars may tell us about the disk of dark matter. More about the nature of dark matter may be revealed at the LHC or at the bottom of a gold mine in South Dakota, a land once ruled by dinosaurs.
Read more
115 people found this helpful
Helpful
Report abuse
See all reviews

Thorsten Altenkirch
4.0 out of 5 stars Good book with some reservations
Reviewed in the United Kingdom on March 4, 2016
Verified Purchase
Good read - I learned a lot about dark matter. The dinosaur add a bit of excitement but sometimes the author is emphasising a bit too much how speculative all this is. Although I am left confused to wether there is evidence for periodicity or not. Some of the later chapters are not as good as the initial ones.
Read more
4 people found this helpful
Report abuse

Gryptype
4.0 out of 5 stars I'll stick with Viz
Reviewed in the United Kingdom on February 7, 2018
Verified Purchase
Bought for a friend obsessed with this kind of thing. His mind was reasonably pickled after so I'm guessing it's good.
Read more
Report abuse

marsha l. reid
3.0 out of 5 stars If you love physics, you will love this book, but maybe overwhelming for the general interest reader
Reviewed in Canada on December 15, 2015
Verified Purchase
I think everyone by now knows of the general scientific consensus that the mass extinction of the dinosaurs was triggered by a asteroid slamming into the Yucutan Peninsula. While Lisa Randall does review the history and science of this discovery, this book is not a retelling of that story, rather she uses the mass extinction of the dinosaurs as a jumping off point to discuss much more ambitious questions, like why do asteroids and meteors collide with Earth in the first place? Are these random events or is there some discernable, predictable pattern to large impact events? And how did such events shape the development of life on Earth?

Raising these questions leads to a discussion of the formation of the Universe itself, our galaxy and solar system, and the intriguing role of Dark Matter. Her theory is that the Dark Matter may have helped nudged an asteroid out of its usual orbit, putting it on a direct path to Earth.

She is clearly a very knowledgeable scientist and passionate about her field of study and to her credit, she doesn't oversell her theory. Her passion and enthusiasm comes through in her writing. She also does her best to breakdown very complex concepts of physics and cosmology for the ordinary layperson. Nevertheless, Dark Matter, for me at least, was a very elusive and difficult concept to grasp. There were many times I felt like the character of Penny in the episode of the Big Bang Theory where Penny asks Sheldon to explain to her "what does Leonard do?". I think in the end, as much as I applaud her for trying to grapple with these big questions of "why" and "what", I felt overwhelmed.
Read more
6 people found this helpful
Report abuse

EB
2.0 out of 5 stars Not rewarding reading..
Reviewed in Mexico on April 13, 2021
Verified Purchase
I use to read lot of this kind of science related books and really this one is one of the most disappointing ones, is full of irrelevant analogies (comparing dark matter distribution to how cities arrange between urban and suburban), anecdotes that really dont give any further insight on the topics (like her own appearance on the big bang theory show) None of the suggestions or theories on her books (like dark matter) are proven, everything is just speculation and very few discoveries or fruitful ideas.
Read more
Report abuse