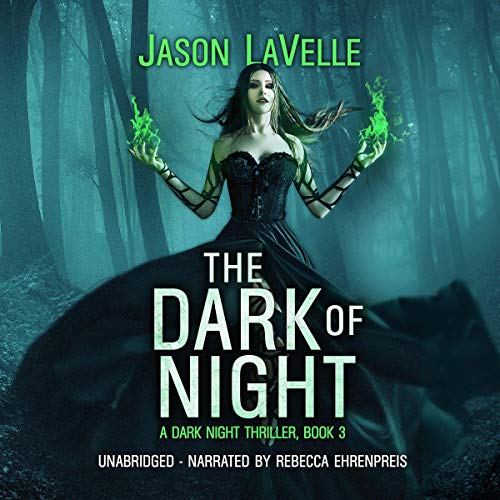 The Dark of Night: A Dark Night Thriller, Book 3

Emma Gilbert never imagined she'd have to battle an ancient evil, one whose powers and rage have been building for centuries.

More than 20 years have passed since Karen Gilbert was stalked by a demon child intent on her death. Still, she can't escape from dark forces in this world. As her life draws near its end, her body ravaged by the same cancer that took her mother and grandmother before her, she's restricted to a hospital bed. With time running out, she must warn her daughter of the dark forces in the world, those she could never talk about before.

Emma Gilbert is as beautiful and headstrong as her mother, and she's just learned that she's about to be called into battle against an unimaginable evil that has stalked the earth for a millennium. She flounders under the weight of her newfound knowledge, and what it might mean for her life, but she cannot ignore her destiny. Forced into a supernatural confrontation, she discovers the daunting stakes should she fail - much more than her own life.

Evolved Publishing presents the third audiobook in the A Dark Night Thriller series. This supernatural thriller/horror novel will keep you listening in suspense.

Shannon Keith
5.0 out of 5 stars I really enjoyed this new-to-me writer!
Reviewed in the United States 🇺🇸 on August 21, 2016
Verified Purchase
In this Paranormal/Horror novel an ancient being of immense evil clashes with a young woman, who is more powerful than she realizes. Emma's mother, Karen, has never told her the truth about her origins and, when she finally does, she is battling advanced cancer-with little hope of survival.

Emma must find a way to rid the world of Amala, the immortal being whom only she can fight. If only she knew how...

The mother/daughter relationship between Emma and Karen is full of love and respect for one another and I loved that. Yet Amala's internal struggle with how much she loved the power she wielded, but grew to hate her immortality, was captivating, as well.

The ending was surprising and I would love to read more novels set in this world.
Read more
One person found this helpful
Helpful
Report abuse

Nicole W.
5.0 out of 5 stars Great sequal to a great book :)
Reviewed in the United States 🇺🇸 on August 18, 2016
Verified Purchase
This was a great read and sequel to The Cold Room. Mr. Lavelle is a fantastic author and I was given it as a beta test reader and loved it so much I bought it to read again. If you haven't checked out his other books you should. Well done Mr. LaVelle on another great book
Read more
One person found this helpful
Helpful
Report abuse

Neesie315
4.0 out of 5 stars Good versus evil with a twist
Reviewed in the United States 🇺🇸 on December 31, 2016
A completely creepy, captivating book! Jason LaVelle has written a book full of great characters with a lot of depth. All of the characters have a bit of light & dark in them, but don't we all? Great mythos throughout the book. A very interesting take on the age-old good vs. evil story.

This book will definitely make you feel many emotions: hate, love, horror, sorrow, anger, empathy This is a book that won't soon be forgotten! The ending is definitely not what I expected.
Read more
Helpful
Report abuse

Deidre
4.0 out of 5 stars DArk and Daring; A great addition to the library
Reviewed in the United States 🇺🇸 on August 17, 2016
I thought this was an amazing book. At first I was hesitant to read it but one I got more involved I could feel and emthize with the characters. It was exciting, dark, adventures I would definitely recommend this as an additional to anyone's library. The female lead was strong and realistic and this book was written to a point to where you could comprehend was the story was well enough.

Jane Owen
5.0 out of 5 stars An awesome read!!!!
Reviewed in the United States 🇺🇸 on August 18, 2016
I was given a copy of 'The Dark of Night' in exchange for an honest review and I did not know what to expect as Mr. Lavelle is a new Author for me and I don't normally read dark paranormal but I was pleasantly surprised by the story. I was given the impression that this was a horror story but it was more of a paranormal thriller and it was full of surprises. Karen Gilbert was a Survivor and she raised her daughter Emma alone after Emma's father passed away. The minute I started reading this I was hooked and could not stop reading it. There was excitement from start to finish, lots of twists and turns and I grew really fond of Emma and her mother, characters were well developed and not once did the story run out of steam. I don't want to say too much, there is nothing worse than spoiler alerts but if your into Paranormal then this is the book for you I had no idea when I started reading this book that this was book number 2. It can totally be read as a Stand Alone and the author does a good Job of explaining the ordeals that Emma's mother has had to endure through her life. An awesome read!!! I would recommend this to anybody whom loves dark paranormal story's.
Read more
One person found this helpful
Helpful
Report abuse

Angela Knapchuck
5.0 out of 5 stars Jason Lavelle has opened my eyes to this awesome world of fantasy and the supernatural!!
Reviewed in the United States 🇺🇸 on August 31, 2016
This book has captured a little bit of realism, with a touch of supernatural... To end with an AWESOME book of fantasy! It's opened my eyes to a genera I never knew existed... and made me hungry for more!!
Characters were complete and well thought out. Making you feel like you were right there witnessing everything first hand! By the end of the book...I DIDN'T WANT TO SEE IT END! If your wanting to read something different THIS BOOK IS FOR YOU! It's written in a way that's believable, and inspires you to love every character... good, bad or ugly.
I will be waiting patiently, hoping for a sequel!!
Read more
One person found this helpful
Helpful
Report abuse

Anna Libby
5.0 out of 5 stars LaVelle Does It Again
Reviewed in the United States 🇺🇸 on August 17, 2016
Loved this book! While it is a sequel, those who read this book first will have no problem knowing what is going on. LaVelle always does a great job of filling readers in without going overboard. The storyline was great and the characters fit very well within it. I also appreciate the fact that it didn't seem over the top or over fantasized; there is a good balance between normal and paranormal. The ending shows promise of another book, which I am impatiently waiting on ;) Great job Jason LaVelle!
Read more
One person found this helpful
Helpful
Report abuse

A. Dorn
5.0 out of 5 stars Romantic, haunting and gory.
Reviewed in the United States 🇺🇸 on August 19, 2016
I love Jason LaVelle's stories, they always keep me up after bedtime, reading one more chapter even though it's dark and I'm terrified. The Cold Room is my personal favorite and I am really glad to know more about what happened to Karen after it ended. This story is written in that same strange mix of romantic, haunting and gory as his others. I can't wait for more from this author!
Read more
One person found this helpful
Helpful
Report abuse
See all reviews

MsSalient
3.0 out of 5 stars Great premise but....
Reviewed in Australia 🇦🇺 on September 20, 2016
Verified Purchase
I really liked the 1st book & was very excited to see this the follow up but was quite disappointed with it.

The whole story was weak & the ending was just pitiful & it left me feeling quite confused & unfulfilled.
Read more
Report abuse
See all reviews