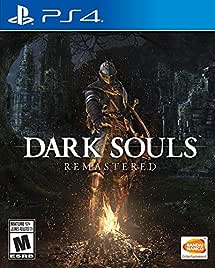 Then, there was fire. Re-experience the critically acclaimed, genre-defining game that started it all. Beautifully remastered, return to Lordran in stunning high-definition detail running at 60fps. Dark Souls Remastered includes the main game plus the Artorias of the Abyss DLC. All 4 platforms will have dedicated servers.

4.8 out of 5 stars
4.8 out of 5
1,613 global ratings
How are ratings calculated?
To calculate the overall star rating and percentage breakdown by star, we don’t use a simple average. Instead, our system considers things like how recent a review is and if the reviewer bought the item on Amazon. It also analyzes reviews to verify trustworthiness.

zabcun
5.0 out of 5 stars Just amazing
Reviewed in the United States on June 5, 2018
Platform: PlayStation 4Edition: StandardVerified Purchase
I came to this game from bloodborne, which I started playing year after I bought it, because I died so many times and left it on the shelf. I played only because I had nothing else to play and was waiting for god of war. Once you understand the game you can't stop, even though you die non stop but you keep coming back with different tactic. After bloodborne I was going to buy dark souls3 but then I saw the DS reamster was coming out soon ,so decided to wait and try to play while trilogy in order, I was a little bit concerned that 7 year old game might just too old with graphics etc, but I'm so happy that I bought it, it's not about the graphics at all,its about the game and its brilliant, now the god of war is on the shelf waiting to play, but only after I finish dark souls trilogy, 5 star game
Read more
33 people found this helpful
Helpful
Comment Report abuse

Shamen
1.0 out of 5 stars Griefer's Paradise
Reviewed in the United States on November 13, 2018
Platform: PlayStation 4Edition: StandardVerified Purchase
The original Dark Souls is the only game I steadfastly played until I had every trophy -- all the way to Platinum on the original PS3. The remaster looks good, but the game play has gone from challenging to absurd. On my first play through, harpies have the difficulty of NG+++. Serpents and treants seem to move twice as fast. Worse, griefer invaders hang out at the usual choke points (e.g., the stairs leading up to Anor Londo) and exploit the ol' parry-backstab bug relentlessly.

No changes were made in the bonfire or relocation rules -- you still can't activate a bonfire with any other players in the game (friend or foe). Prepare to spend a lot of time running through vacant landscapes -- you can't teleport between bonfires until late in the game. Makes you appreciate Dark Souls III all the more.

I had really hoped to reach Gough -- my all-time favorite game NPC. But after 20 or 30 tries to get to the bonfire inside Anor Londo castle, I'm done. Life is too short, bye bye griefers.
Read more
16 people found this helpful
Helpful
Comment Report abuse

Tristan P.
5.0 out of 5 stars A Great Remaster
Reviewed in the United States on June 4, 2018
Platform: PlayStation 4Edition: StandardVerified Purchase
I know that there has been a lot of back and forth on the reviews of this remaster. Most of the negativity has been towards the PC version, which I totally get. This remaster does not add much to that version of the game. In fact, it might limit some of the ports and whatnot that have come out since the original released. However, this has been exceptional for the PS4. The graphics update are nice, but not overdone. Perhaps my favorite update has been the enhanced multiplayer aspect. I don’t get a lot of time to play games, and when I do I tend to want to play with friends. The added matchmaking features that they had in Dark Souls 3, which allows me to play one of my favorite games of all time with my friends.

I think if you are wanting to play this on the console, then I recommend getting this version. It would also be a great introduction to the SoulsBorne genre of games.
Read more
16 people found this helpful
Helpful
Comment Report abuse
See all reviews

Vaughan Nicholson
5.0 out of 5 stars Dark Souls Memories
Reviewed in Canada on May 25, 2018
Platform: PlayStation 4Edition: StandardVerified Purchase
Thousands of old and new hollows flooded Lordran again. The memories of that place will always stick with the veteran players and hopefully they'll make new ones. With the addition of new players to the original installment, we should welcome them with open arms and teach them what Dark Souls really is.

Recently we saw the Dark Souls saga come to an end with Dark Souls 3, but now we revisit the beginning of our fond memories.

Page 1 of 1 Start overPage 1 of 1
This shopping feature will continue to load items when the Enter key is pressed. In order to navigate out of this carousel please use your heading shortcut key to navigate to the next or previous heading.
Back
Next
Pages with related products. See and discover other items: spiderman ps4, PS4 PS Plus