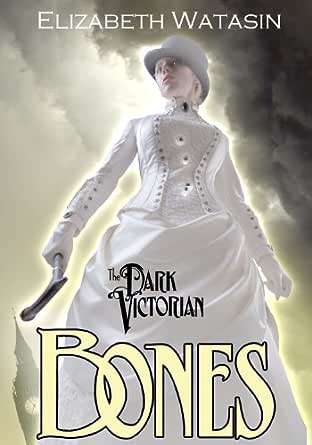 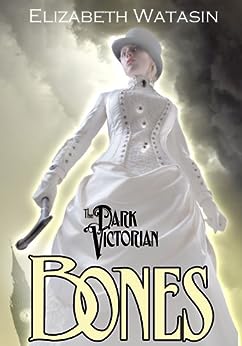 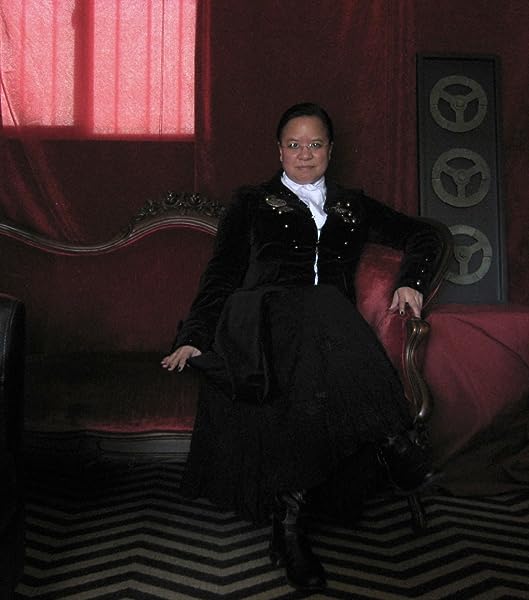 "Though I enjoyed the first book I just freaking adored this one."

"BONES is one of the most unique and entertaining books I have read in quite some time. I applaud Elizabeth Watasin for her ingenuity."

Elizabeth Watasin is the author of the Gothic steampunk series The Dark Victorian, The Elle Black Penny Dreads, the forthcoming paranormal sci-fi noir series, Darquepunk, and the creator/artist of the indie comics series Charm School, which was nominated for a Gaylactic Spectrum Award. She lives in Los Angeles with her black cat named Draw, busy bringing readers uncanny heroines in historical fantasy, sci-fi noir, and paranormal detective tales.
Follow the news of her latest projects at A-Girl Studio.

Anonymous
5.0 out of 5 stars Best Steampunk Book I've Read to Date.
Reviewed in the United States on September 20, 2015
Verified Purchase
In this second installment of "A Dark Victorian; Bones" by Elizabeth Watasin, she creates in both her writing and her illustrations, a cohesive and wholly believable environment that interweaves almost seamlessly with her characters. It is enjoyable reading and sucks you in fast and by the time the book is done, you want to beg for more.

Watasin is a vastly intelligent and well-researched writer- she brings in characters from many varying backgrounds, and they interact with each other very well, she really makes you feel for the characters. My favorite character- as far as new additions go, is Delphia Bloom- she's a true delight!

This book helps break down barriers between sexuality, race,religion, class, and even etheric fields! I am waiting in breathless an-ti-ci-pation for the follow up to this title! Really, you're leaving us hanging!!!!
(review originally posted under listing for book-only format; I have the paperback I can read by candle light if all else fails.. ;-)

Walki F Tinkanesh
5.0 out of 5 stars Written with a quirky sense of humour
Reviewed in the United States on November 3, 2014
Verified Purchase
Skull and Ghost are back! Art is the artificial ghost, Jim is the animated skull. They are supernatural agents of HRH Prince Albert's Secret Commission and reside at the House of Vesta, a private club where clients are sophisticated and queer. In their second case together they are dealing with a black arts surgeon who kills poor people to sell their bones to the rich in need. Art, being over six feet tall, could be the next victim.

Like her predecessors, Art has no memory of who she was before her death. She wants to know and has already found out that she is a Quaker and a sapphist. While getting close to Manon, the Dryad at the House of Vesta, she is also reconnecting with the Skycourt sisters, mad journalist Helia and adventuress Helene.

'Bones' takes us to the college of surgeons in front of which anti-vivisection protesters have set up camp. It takes us to the Black Market where people desperate for healing go as a last resort. We are introduced to streetwise Delphia, Jim's new assistant. We discover many more wonders in this mechanical and eldritch London from 1880.

'Dark Victorian: Bones' is an entertaining sequel to the fantastic 'Dark Victorian: Risen'. It is knowledgeable and inspired, written with a quirky sense of humour by the unique and multi-talented Elizabeth Watasin. It is a must-read for fans of gothic steampunk.

The next instalment, 'Ice Demon', was released recently.

tld
3.0 out of 5 stars It also spends a great deal of time with Delia
Reviewed in the United States on November 3, 2014
Verified Purchase
Once again Artifice and Jim Dastard must solve an occult mystery, this time one of dead bodies being found completely without their skeletons. But this book is not only a mystery. As a matter of fact, this mystery is actually a minor plot in this book, which is far more concerned with the mystery of Artifice's pre-resurrection identity, and her lovelife where it concerns Manon the dryad-prostitute and Helia Skycourt, the demon-tainted journalist. It also spends a great deal of time with Delia, Jim's new assistant, the cozy triangle of Manon-Arlette-Oleg, Helia and sister Helene and their connection to Artifice past and present, and Jim's quite odd manner of speech. The world Watasin has built is fascinating and I adore spending time in it.
Read more
Helpful
Comment Report abuse

michael
5.0 out of 5 stars A must read
Reviewed in the United States on October 29, 2018
Verified Purchase
One of my new favorites, glad I stumbled into this. Have purchased all books in series. Now going to read the next one.don't miss out read now.
Read more
Helpful
Comment Report abuse

K. Davis
5.0 out of 5 stars Very Interesting.
Reviewed in the United States on July 22, 2013
Verified Purchase
I am hooked on this series. I have to say it is a bit strange but I have come to love the characters. An easy and fun read, with a good story. I can't wait until the next book.
Read more
Helpful
Comment Report abuse

Amazon Customer
5.0 out of 5 stars Loved this story
Reviewed in the United States on May 9, 2013
Verified Purchase
It is an engrossing and unique whodunnit. I loved the main character and her struggle with her past as she begins to realize who she is now. A great exploration of a very different world but with well-rounded characters and good environments. I wait anxiously for each new novel by this author.
Read more
One person found this helpful
Helpful
Comment Report abuse

PamDD
5.0 out of 5 stars Enjoyable Steam Punk series
Reviewed in the United States on May 30, 2015
Verified Purchase
It's an easy read and an enjoy a me series.
Read more
Helpful
Comment Report abuse

Petra P
5.0 out of 5 stars Dark fun
Reviewed in the United States on May 12, 2013
Verified Purchase
Richly imagined characters and an offbeat dark Victorian London make for another great story involving re-animated ghost good guys (or girls, as the case may be) and a talking skull in a top hat. Very much looking forward to a next installment!
Read more
Helpful
Comment Report abuse
See all reviews

hazeyfantasey
4.0 out of 5 stars A fascinating read
Reviewed in the United Kingdom on May 14, 2015
Verified Purchase
This is book＃2 in series and I enjoy the concept even though the subject matter is really rather dark. A fascinating read but not as funny as Risen.
Read more
Report abuse