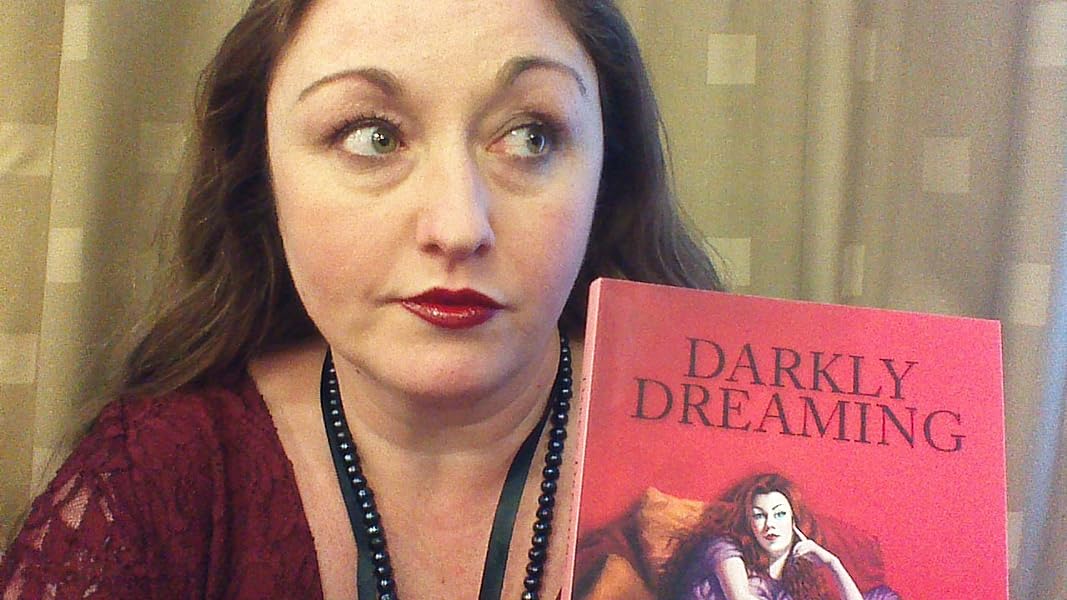 Chloe Hammond is an Aquarius, very Aquarius. Born in Liverpool in 1975, she grew up in West Wales, but now lives in Barry in South Wales, with her husband and rescue cats and dogs. She always wanted to write, but life got in the way. Last year she was diagnosed with extreme anxiety and depression, which caused nightmares and sleepless nights. In her typically contrary way she used this to her advantage and the nightmares became this novel, and the sleeplessness nights were when she found time to write it. She has a lovely sea view from her desk, which she gazes at to still her mind so her characters can burst forth and have their say. Chloe frequently submits poetry and short stories to Cake and Quill's charity Anthologies.

Start reading DARKLY DREAMING on your Kindle in under a minute.

4.5 out of 5 stars
4.5 out of 5
33 global ratings
How are ratings calculated?
To calculate the overall star rating and percentage breakdown by star, we don’t use a simple average. Instead, our system considers things like how recent a review is and if the reviewer bought the item on Amazon. It also analyzes reviews to verify trustworthiness.

Stephen Hunt
3.0 out of 5 stars Eat, Prey, Love
Reviewed in the United States on November 23, 2018
Verified Purchase
This is an unusual vampire novel. Two divorcees (or near-divorcees) are wrestling with the problems of mid-life, jettisoning their unfulfilling husbands and struggling with work and the prospect of trying to have children - when an encounter leaves them forever changed. They become vampires. Beautiful, ravishing vampires.

They proceed to try to make sense of their lives as they chart their unlife. Their vampire existence brings new passion, occasional accidental lesbianism, and a desire for growth. Eat, Prey, Love, you might say.

I must say this book is not for me - I feel I'm very much not the target audience. It's mildly racy and it's deeply wish fulfillment at work, but if that's what appeals to you, you might want to dip into the first pages preview.

I'm giving it three stars - but not being the intended reader for this, I wouldn't take that as a criticism. I like my vampires darker and more dangerous, whereas with this, being undead has never been so life-affirming.

Hayley Kiwibird
4.0 out of 5 stars Refreshing take on the modern vampire novel
Reviewed in the United States on October 16, 2016
Verified Purchase
More than just about vampires, Darkly Dreaming is a novel about identity, friendship, love and belonging. There is a little bit of everything is this novel. It has just the right amount of darkness and depravity that you would expect from a modern vampire/horror novel and just the right amount of thoughtfulness and depth that you would expect from a novel containing elements of romance. The characterization in this novel is superb, particularly the characters of Rae and Layla, whose camaraderie was one of the things I enjoyed most about this book. And to be frank, I found it refreshing that the author chose to write older, well established characters with adult issues, rather than jump on-board the teenage vampire trend.

The author, Chloe Hammond, writes very well. She consistently maintained a style that seemed almost effortless on the page. Her words were easily readable and the story kept a cracking pace from start to finish with only a few lulls in between. There were a few areas that I would have liked to have been fleshed out a little more but I would happily read another work by this author.

Maria Riegger
4.0 out of 5 stars A coming-of-age vampire tale
Reviewed in the United States on November 24, 2018
Verified Purchase
A fast-paced, intriguing, and thought-provoking read. This is a vampire novel, but it is certainly more than that. It's a story with well-developed characters with real-life motivations, trying to find their way through life. I definitely sympathize with main character Rae, who escapes the monotony of life through daydreaming, and who is trying to be herself in a world where everyone tries to change her.
Read more
Helpful
Comment Report abuse

Kindle Customer
5.0 out of 5 stars Darkly dreaming
Reviewed in the United States on June 17, 2016
Verified Purchase
I loved this book its about vampires but it's a different type of vampire book. I enjoyed it and had trouble putting it down.
Read more
2 people found this helpful
Helpful
Comment Report abuse

Scott James
5.0 out of 5 stars A great read!
Reviewed in the United States on April 3, 2019
Verified Purchase
Grabs you from the git-go, fast paced, a fun read if you're into horror!
Read more

Cynthia
4.0 out of 5 stars After a terrible night, the friends learn they’ve become infected with ...
Reviewed in the United States on May 29, 2018
Forty year old divorcees, Rae and Layla plan a girl’s weekend in France. After a terrible night, the friends learn they’ve become infected with a virus and are now what we know as vampires.
Unable to return to their prior lives in their current condition, they must live on a farm in a Pride group of vampires.
The Pride groups are a commune of vampires who work and live together in harmony. While Layla adapts quite well, Rea is left alone and feels much like an outcast. Unable to assimilate her place in her prior life, she finds her same insecurities carrying over into this new life.
In college she had a boyfriend that thought so little of her, he didn’t even mention to say goodbye, her husband was not much better calling her Rach instead of her actual name, Rae. Then on the farm, she falls for and is severely rejected by a man she thought she could give her whole self to.
Despite her vampirism, Rea’s journey on the farm is one of self-discovery. Just think of Eat, Prey Love and an American Werewolf in London all cramped together and spitting out a happily ever after.
Read more
One person found this helpful
Helpful
Comment Report abuse
See all reviews

Dina Williams
5.0 out of 5 stars Love love love this book.
Reviewed in the United Kingdom on November 16, 2015
Verified Purchase
I started reading Darkly Dreaming one evening with the full intention of reading the first chapter and then continuing in the morning... Several hours later I finally was able to put it down, having devoured the whole novel in its entirety, in one sitting. And the feeling I just couldn't shake that I was desperate to read more about the brave, yet misunderstood heroine Rae.

Darkly Dreaming is a deceptively devious debut from Chloe Hammond. The story lures in the unsuspecting reader with familiar fare - middle class, middle aged woman reinvents herself and goes on a French jolly with her mates. But then the story takes a shocking and macabre twist that takes the reader away from the tedious comfort of similar tales, as Rae and her best friend, Layla embark on a nightmare that dives them both head-first into the fantasy horror genre with relish.

It's about time vampires weren't all tormented souls and slightly annoying youths, full of their typical and over-documented teen angst (I mean, get a grip, and grow up). The vamps in Darkly Dreaming are graceful, beautifully creepy, horny, powerful, savage and at times, downright evil. But they are also startlingly human, with their own problems, pettinesses, power struggles and insecurities. While Hammond isn't afraid to explore darker aspects of this horror story, - and at times the adult themes are graphic - she balances this with a good level of humour and one liners that you just wish you'd come up with yourself.

If you read the Twilight saga and wanted to give Bella Swan a damn good slap, this book is for you. If Sookie Stackhouse was ever so slightly too in love with herself for your liking, Darkling Dreaming will not disappoint. Aimed at an older audience, the 90s nostalgia is spot on, as are Hammond's observations of a woman drowning in her own seemingly perfect life, yet relying on her day dreams to maintain her facade of sanity. To be robbed of her ability to dream following her transformation into a vampire, is a horrific realisation for Rae - almost as repugnant to her as her newly formed lust for human blood.

I'm hoping that this is not the last we'll hear from our heroine nor this novelist; but something tells me we'll be hearing the names Rae Reeves and Chloe Hammond for some time to come.
Read this book, you will love it.
Read more
Report abuse

Erica Keating
5.0 out of 5 stars Fantastic read, gripping, very entertaining with great characters
Reviewed in the United Kingdom on September 9, 2020
Verified Purchase
I loved this book! The first paragraph was most certainly attention grabbing, and the slow build up of character exploration works, I really did like and care about the main characters. This is a completely new take on the vampire myth, and one that breathes a little fresh air in. Gripping, entertaining, brutal and amusing, I had to reluctantly put it down to get on with other things. Bought the sequel immediately!
Read more
Report abuse

mrs stone
5.0 out of 5 stars Anne Rice would want to be you
Reviewed in the United Kingdom on November 25, 2017
Verified Purchase
What a deliciously lovely book and a refreshing new take on the vampire trope.
I love Chloe's ideas on who turns and who they turn into after their transition.
I felt for Rae so much always picking the wrong men, her anxiety and quietness I understood completely and eagerly await the next in the trilogy for Rae and Layla two half's of a coin.
Read more
Report abuse

LAJ
5.0 out of 5 stars Sensuous and intriguing
Reviewed in the United Kingdom on February 5, 2019
Verified Purchase
I've rarely read vampire stories but this one was recommended by a colleague and I thought I'd give it a go. Sensuous, at times lyrical and occasionally brutal, I found it well thought out and as plausible as a work of fantasy could be. Enjoyably intriguing, I will definitely read the sequel.
Read more
Report abuse