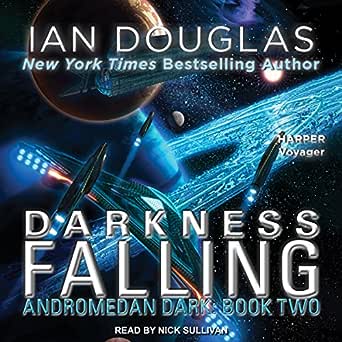 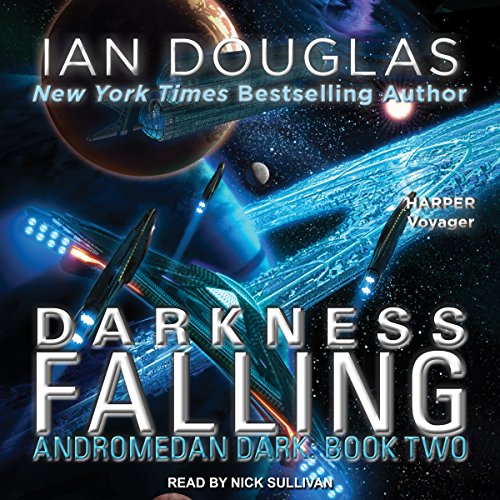 Doctor Moss
VINE VOICE
3.0 out of 5 stars Great Space Opera Feel But Maybe a Little Heavyhanded
Reviewed in the United States on November 11, 2018
Verified Purchase
I have to admit I was a little disappointed in this one. I thought the first book in the series, Altered Starscape, set up a hugely promising, incredibly scaled space opera — colliding galaxies, alien civilizations, dark matter civilizations, . . . All of those things are still here, and the story is entertaining. I just think there’s more to the premise than has been mined. At least so far.

The story picks up with the Tellus Ad Astra (the colony ship Tellus still mated to the military tug Ad Astra) thrown billions of years into the future, when our Milky Way Galaxy is colliding with the neighboring Andromeda Galaxy. Grayson St. Clair is in charge of the Ad Astra, and while in a military situation, also in charge of the combined Tellus ad Astra, in a stressed relationship with its civilian leadership council. The civilian leader, Günter Adler, has been rendered insane by an interaction with the dark matter intelligence intruding from Andromeda.

St. Clair leads the Tellus Ad Astra through an encounter with an alliance of advanced civilizations, organized around what could be the descendants of Earth. That alliance is in conflict with the Andromedan Dark as well, and in fact comes to the defense of the Tellus ad Astra.

But the alliance, the “Cooperative”, also seeks the help of the Tellus Ad Astra leadership. Despite the unimaginable technical, and even military, superiority of the Cooperative, there is something they critically need that St. Clair and the humans aboard the Tellus Ad Astra can contribute.

The battle between the Andromedan Dark and the combination of the Cooperation and the Ad Astra is the dominant part of the story. And the course of the battle, in which friction develops the Cooperative and St. Clair, serves to develop some of the core themes of the book.

The huge scale and the imaginative aspects of the story’s setting are great. This is space opera at its grandest.

The characters, though, left me a little flat. St. Clair is the protagonist of the story, standing out well above all the other characters. The civilian leadership of the Tellus is composed of one-dimensional, conniving self-seekers. There’s very little to their characters beyond an amoral drive for power.

St. Clair has depth — conflicts and different impulses to sort out — but he’s alone among the leading characters.

Interestingly, the one character besides St. Clair who has depth is his robot companion, Lisa. St. Clair has granted Lisa freedom to live an autonomous robotic life, no longer what amounts to a sex slave. She’s unprepared for the freedom St. Clair has given her, and she goes out in search of the reflective space and independent experiences that will help her begin to determine who she is and wants to be.

And it needs to invent that self-determination in the context of a hierarchy of alien civilizations where they don’t appear to be top dog.

There’s a lot going on here, and I do like the series. The one weakness, I think, is how thin the characters, other than St. Clair and Lisa, are. St. Clair is Buck Rogers, transported to the future and trying to save the galaxy from the forces of evil (or at least the apparent forces of evil). Lisa carries much of the background theme of self-determination and also brings it to the forefront of St. Clair’s thoughts and actions. It’s fun, and the setting gives it all a wondrous feel.

It may be that what I’m missing is ambiguity. The author (“Ian Douglas” is a pen-name) has a point he wants to make about freedom and self-determination. I think he may target his characters toward that point a bit too heavy-handedly. When authors want to make a point, sometimes I think their characters (ironically, given the theme here) lack the ambiguity and even autonomy that comes with depth and multi-dimensionality.

S. Williams
4.0 out of 5 stars Interesting Read
Reviewed in the United States on July 30, 2018
Verified Purchase
I've read both books in this series, very interesting idea. The premise is one of the more interesting ideas I've read in Sci-Fi. This could be a great series, but thus far the story lacks depth. In thinking about this more, I've now read over 600 pages, but don't feel like much has really happened. An interesting read overall, worth it, but I hope future books in the series continue to expand the universe explored, and focus more on action.

A great combination of military and Sci-Fi, if that is what you're looking for, I would recommend picking this up.
Read more
One person found this helpful
Helpful
Comment Report abuse

jimkrk
5.0 out of 5 stars Full circle
Reviewed in the United States on May 14, 2019
Verified Purchase
Book 2 continues the interesting story started in book 1,good plot lines and well thought out characters, with interesting takes on science and physics, well worth the price
Read more
One person found this helpful
Helpful
Comment Report abuse

cioangel
5.0 out of 5 stars Great book, trouble putting it down good.
Reviewed in the United States on April 30, 2020
Verified Purchase
Better than the first book. Nice unexpected wrap up. Lots of things to think about. I would say even a bit bold.
Read more
Helpful
Comment Report abuse

Timothy
5.0 out of 5 stars Wow!
Reviewed in the United States on February 19, 2018
Verified Purchase
As a kid the whole of space drama happen in the solar system. Terror from Mars! Today it spans the universe. This is a great story and I enjoyed it very much. Science seems sound and I would love to read some of the reference material. May have to reread book one !
Read more
Helpful
Comment Report abuse

Grumpy Old Man
5.0 out of 5 stars Very Smart and Original story!
Reviewed in the United States on January 30, 2020
Verified Purchase
This was a very good story, only two books!! Cant wait for the sequel! I want more!
Read more
Helpful
Comment Report abuse

Christopher J. Dean
5.0 out of 5 stars Good mix of speculative physics and future space combat
Reviewed in the United States on April 14, 2018
Verified Purchase
All his series share common themes but since I like the space opera and the physics I don't mind. Another good read from an excellent author.
Read more
Helpful
Comment Report abuse
See all reviews

Amazon Customer
4.0 out of 5 stars Faltered in the middle but ended strong
Reviewed in the United Kingdom on December 23, 2018
Verified Purchase
Good use of future tech concepts, reasonably good editing, although sometimes a bit too expository. The narrative seemed to stall for quite a while in the middle but had a satisfying conclusion and a number of threads were neatly tied up
Read more
Report abuse

Kindle Customer
5.0 out of 5 stars Better than Book One.
Reviewed in the United Kingdom on January 20, 2018
Verified Purchase
This is typical Douglas' story. Very American, but has some universal (again, it is rather Western universalism) flavours. Characters are nicely put, storytelling is good, what else do you need?
Read more
One person found this helpful
Report abuse

Steven C. Zitis
5.0 out of 5 stars Five Stars
Reviewed in the United Kingdom on May 18, 2018
Verified Purchase
After reading Book One read Book Two. You won't regret it.
Read more
Report abuse

Sany176
3.0 out of 5 stars Not the authors best
Reviewed in Canada on February 27, 2018
Verified Purchase
Ian Douglas is writing along the lines of the Star Carrier series with this series. I get the feeling that he is getting bored with the subject and this novel is just to fulfill obligations. The flow from the first novel to this on has a disconnect which leaves the reader wondering what is going on. A little disappointed with the author who is a magnificent writer. Not up to his abilities on this one.
Read more
Report abuse

Scott Osmond
5.0 out of 5 stars Action, Adventure, what SF Should Be!
Reviewed in Australia on December 6, 2017
Verified Purchase
As expected a great read. ID delivers a consistent stream of action packed stories. It's difficult without spoilers to describe the awesome awaiting a new reader to this series. Alien megastructures, questions of identity and freedom, just how much should a A.I have and are they really alive? What happens to technologically advanced cultures? What will happen to humanity in the long term? Believable characters both human and A.I. I am looking forwards to the next entry.
Read more
Report abuse
See all reviews