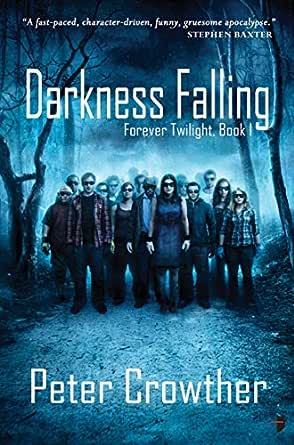 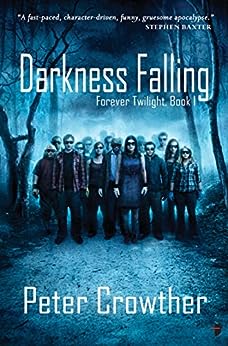 "[The novel] very intelligently and deftly invokes a host of cinematic spookshows from Invasion of the Body Snatchers onwards." - Asimov's

Peter Crowther is an experienced British novelist and screenwriter. He also runs the UK’s best-known quality small press, PS Publishing, and has published many, many authors of high standing. This, and his connection to the community, means he is well-placed to deliver strong endorsements.

3.6 out of 5 stars
3.6 out of 5
16 customer ratings
How does Amazon calculate star ratings?
Amazon calculates a product’s star ratings based on a machine learned model instead of a raw data average. The model takes into account factors including the age of a rating, whether the ratings are from verified purchasers, and factors that establish reviewer trustworthiness.
Top Reviews

Sandra Peel-Colwell
4.0 out of 5 stars Very good.
Reviewed in the United States on June 10, 2013
Format: Kindle EditionVerified Purchase
This book was well written and very plausible. I didn't realize it was a series of books, but after reading, I'm looking forward to the next book.
Read more
Helpful
Comment Report abuse

Guillermo
3.0 out of 5 stars Inconsistencies from the sky
Reviewed in the United States on September 27, 2011
Format: Paperback
Peter Crowther crosses genres with his Forever Twilight series. In Darkness Falling, Crowther introduces us to a group of body-snatching-alien-zombie creatures that plague the world, create flying cars and attempt to create eternal darkness. It's one part Tommyknockers, three parts Outer Limits and Twilight Zone with a dash of Zombieland and The Langoliers. And the premise isn't as cheesy as I just made it out - it's great, in fact. Fast-paced. His characters - while seemingly outlandish at times - are three-dimensional. However, the way he tackled the task was less than stellar.

Crowther goes into great detail about every single event. What makes this worse is the fact he has to repeat it - almost in a cut-and-paste fashion. Rather summarizing earlier events when it came to flashbacks, we were given the entire play-by-play. He also doesn't keep taps of what he's writing. A Barnes and Noble transforms into a Borders on and off in one chapter alone. This is just one example of the inconsistencies that riddled the novel. How the editors over at Angry Robot Books overlooked these boggles my mind.

Perhaps if Crowther spent more time on revision, the novel would have scored a higher rating. Perhaps, Book 2 will improve on the area, all the while keeping the two factors that made this book readable.

Patrick Freivald
1.0 out of 5 stars I got it for free, and I want my money back.
Reviewed in the United States on April 11, 2012
Format: Paperback
This book is awful. I'd put in spoiler alerts, but spoiling this book is impossible.

Forget the petty problems like a Barnes and Noble becoming a Borders and then re-becoming a Barnes and Noble, or the stilted dialogue, or the choppy, sloppy, inconsistent writing where flashbacks are literally word-for-word copy-and-pastes from earlier in the book and action scenes are so confused it's almost impossible to discern what's going on: This book has bigger problems.

From two-dimensional characters with two-dimensional problems (I hate my wife but now that she's gone I miss her), to not one single premise explored (Why did any of this happen? Why did the people come back instead of staying gone? Why the sunglasses and gloves? Why the hover cars? What was the light? Why the second light? Where the hell did everybody get sunglasses? Why did they suddenly start talking, and why about Geoff?), to not one plot arc resolved (Why did Virgil put the body in his trunk? Why do we care if he's a serial killer if he not only doesn't kill anyone else throughout the entire book, he doesn't do anything else, either?), to absolutely shoddy research (revolvers don't have safeties, guns don't knock people over when they fire them and they don't blow off entire limbs... and oh yeah, I-90 doesn't even go through Denver), to characters making references to popular culture twenty years or more too old for them...

Ugh. Just terrible. Save yourself the pain and skip this one. Even if you're given a copy for free.

Wag The Fox
3.0 out of 5 stars A blend of great promise--and frustration
Reviewed in the United States on November 14, 2011
Format: Paperback
One of my favorite sci-fi movies from the mid-20th century is Invasion of the Body Snatchers, so when I checked the back cover of this book I realized I had an immediate want to read it. Whether aliens, zombies, or whatever the monster is, the concept of losing your identity and becoming part of a collective is frightening.

Darkness Falling starts off with a flash of light, piercing bright to a painful degree, and in its wake all but a few people disappear. Gone. Like a Rapture. Ronnie in particular, a disgruntled husband, has his world turned upside when his wife (and everyone else except two others) vanishes in mid-flight as they sit next to each other arguing. Ronnie's two companions in the aftermath are a little girl named Angel with an apparent quasi-clairvoyance and a cartographer in the cockpit with a tenuous knowledge of how to fly. After they crash land into a Barnes & Noble, something I found especially poetic given today's publishing climate, they exit the plane and find the world--or at least Denver--is absent of any human life. Actually, all life seems to be gone. Birds, bugs, everything.

Other characters are highlighted in the story, as their paths converge. There's the foursome holed up at a small radio station who venture out and find vehicles and buildings empty, as if abandoned a la Chernobyl, engines running and appliances humming. As they try to piece things together, they wonder if their proximity to the radio tower may have spared them from disappearing too, and worry if another flash of light will occur.

Then there are a couple of, shall we say, eccentric characters: Virgil, a serial killer with an affinity for wrapping his victims in fabric like a mummy until they suffocate; and Sally, a woman with some form of multiple personality disorder, with a head full of children's voices representing all the kids she wish she could call her own. These two, along with the sporadic mind-reading of the little girl, really amp of the 'weird' factor in this novel, and give the whole plot a smorgasbord of Twilight Zone elements.

And when the people who disappeared come back; sporting Bono-style shades and work gloves, and amble around as if they're just learning to walk or like puppets on strings; all bets are off.

On one level the book is a really exciting read with a rewarding level of mystery and menace. The action doesn't let up very often, especially as all of the characters near the point at which they all meet. On another level though, the book is aggravating. 'Book 1' is clearly emblazoned on the cover, so I expected some level of "tune in next time, folks!" but the novel left off feeling unfinished. I basically felt like I'd read the first act of a three-act story. Allusions to tensions within the whole group go unresolved and there are no real answers provided about the nature of the zombie-ish people who reappeared and started hunting the survivors down. The story was originally published years ago as a series of novellas, so maybe that explains it. Another irritant was the blocks of narrative that appeared more than once, but I'm willing to pass that off to the idea that I read an ARC copy of the book (I didn't see advance review copy or uncorrected proof printed anywhere on the book, though).

It's a good start to what I suspect will be a very entertaining saga, but even after four hundred pages I felt the book needed more, namely Book 2. I wonder how long readers will have to wait for that to come along.