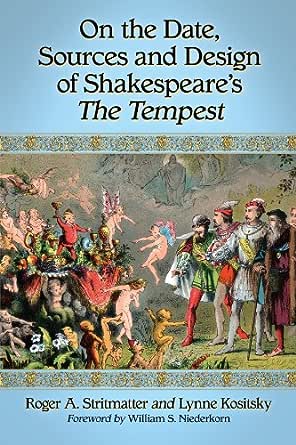 On the Date, Sources and Design of Shakespeare's The Tempest Kindle Edition

Flip to back Flip to front
Audible Sample Playing... Paused   You are listening to a sample of the Audible narration for this Kindle book.
Learn more
ISBN-13: 978-0786471041
ISBN-10: 0786471042
Why is ISBN important?
ISBN
This bar-code number lets you verify that you're getting exactly the right version or edition of a book. The 13-digit and 10-digit formats both work.

"terrific...well-designed and a pleasure to read"--The Oxfordian: Annual Journal of the Shakespeare Oxford Society. --This text refers to the paperback edition.

Roger A. Stritmatter is an associate professor of humanities at Coppin State University and general editor of Brief Chronicles: An Interdisciplinary Journal of Authorship Studies. He has published on Shakespearean topics in a range of academic journals, including The Shakespeare Yearbook, Review of English Studies, and the Scandinavian Psychoanalytic Review. He lives in Baltimore, Maryland.

Lynne Kositsky is a poet, author, and independent researcher whose honors include the E.J. Pratt Medal and Award for Poetry and the Canadian Jewish Book Award for Youth. Her articles with Roger Stritmatter on the dating and sources of Shakespeare's The Tempest have appeared in journals such as The Oxfordian and Critical Survey. She lives in Vineland, Ontario. --This text refers to the paperback edition.

Uncle Ruddy
5.0 out of 5 stars Excellent thorough research presented clearly
Reviewed in the United States on May 24, 2019
Verified Purchase
For those of us who have actually read this book (this most certainly excludes some who are intellectually lazy - B.J.R. Of course comes immediately to mind, but there are others) this is a welcomed and very thorough examination exploring the question of when Shakespeare’s The Tempest could have been written. Stritmatter and Kositsky have presented their case carefully, thoroughly and in a very readable text. Their findings are a erudite challenge to the conventional wisdom. After reading this, anyone who still cleaves to Strachey’s material as being the only possible source will need to examine his or her level of intellectual curiosity.
Read more
One person found this helpful
Helpful
Comment Report abuse

Mark Andre Alexander
5.0 out of 5 stars What Shakespeare Scholarship Should Look Like
Reviewed in the United States on July 31, 2015
Verified Purchase
I came to Shakespeare in college trusting the tradition of Shakespeare scholarship. Since my graduate focus was on Classical Rhetoric, I learned to recognize the difference between solid arguments based on evidence and reason, and those based on language that avoids the better argument or relies on attacking the person. But most common, I found those who advanced the weaker arguments tended to suppress evidence.

When I first explored the issues surrounding Shakespeare authorship, I found a lot of kooky stuff, with self-serving arguments that relied on things like cryptograms and specious claims that had little real scholarship to back them up. I would sit in a university library and check sources and make interesting discoveries about how people would rhetorically fool themselves and others.

Then I came upon Charlton Ogburn's "The Mysterious William Shakespeare" and the world inverted. I sat in the university library checking Ogburn's sources and found something unexpected: The traditional Shakespeare scholars exposed themselves in their own words as advancing weaker arguments and using very poor argumentative tactics.

I found there was good reason why famed historian David McCullough in the Foreword wrote: "...this brilliant, powerful book is a major event for everyone who cares about Shakespeare. The scholarship is surpassing--brave, original, full of surprise--and in the hands of so gifted a writer it fairly lights up the sky."

That exactly described my experience with the scholarship.

Roger Stritmatter and Lynn Kositsky are scholars in the Ogburnian mode. They rely on evidence and reason to make the better argument. They know how to do the research necessary to understand what kinds of objections may be raised against their arguments, and they are transparent in dealing with these.

And that is always refreshing in Shakespeare scholarship. Personalities are de-emphasized while the evidence and the better or worse arguments are the main focus. Since this is a work of real scholarship, it requires readers willing to meet its thoughtful demands, readers willing to do the work to meet the text on its own terms.

What I think should be most striking, and most disconcerting, to traditional Shakespearean scholars is how utterly fair the authors are in managing the evidence and arguments, especially the various competing theories. I believe any thinking person who does not have a personal or professional stake in the prevailing notions of William of Stratford's authorship will find this book extremely illuminating.

Charles A.Boynton
5.0 out of 5 stars Five Stars
Reviewed in the United States on December 2, 2016
Verified Purchase
Researched well; written well. What else is there to say.
Read more
Helpful
Comment Report abuse

Matthews Stephen
5.0 out of 5 stars Deconstructing a speculative chronology
Reviewed in the United States on February 2, 2014
Verified Purchase
Honest scholars of Shakespeare often admit that the dating of plays is largely a matter of conjecture, since performance and publication necessarily lag behind composition. In a few cases, however, it is claimed that earliest dates can be established by references to contemporary events. In the case of The Tempest, textbooks tell us that the play makes reference to (or was even inspired by) a shipwreck which took place near Bermuda in 1609, and 'must' therefore have been written between the shipwreck and the first recorded performance of The Tempest in 1611.
In this book Stritmatter and Kositsky deconstruct this story, which turns out to be little more than an old guess by one of the earliest Shakespeare scholars, Edmond Malone.
One of the strongest clues that the conventional chronology is untenable comes from contemporary references to plays which supposedly had yet to be written. Most egregiously, there are numerous references to the plot and title of Hamlet from 1589 onwards, long before the 'experts' would have us believe the play was written (some conjure up a ghostly 'Ur-Hamlet' as a predecessor play for Shakespeare to have plagiarised). Stritmatter and Kositsky show that this problem applies equally to the Tempest. Most clearly, Jakob Ayrer's Die Schoene Sidea (1605) shares crucial plot elements with The Tempest. Ayrer's work is, by his own admission, derivative of English plays (p.103), and there is no plausible suggestion as to how it could have influenced Shakespeare. The authors argue further that The Tempest was the play performed in February 1605 under the title "The Spanish Maze". Developing a brilliant hypothesis first put forward by Richard Malim, they show that this alternative title is entirely appropriate: "Spanish" is straightforward, since the noblemen in the play hail from Naples and Milan, both under Spanish rule in Shakespearean times; and the play contains several references to mazes, notably Alonso's "This is as strange a maze as e'er man trod". Stritmatter and Kositsky do not discuss other possible identifications of The Spanish Maze but the main alternative to have been suggested, Kyd's Spanish Tragedy, makes no references to mazes at all. Either The Spanish Maze was The Tempest, or it has disappeared without trace.
A strong case is made that accounts of the Bermuda shipwreck are both unnecessary and unlikely as sources for The Tempest. They are unnecessary because the elements supposedly inspired by the Bermuda incident can all be found in shipwreck narratives from St Paul through Eden (1555) and beyond; and unlikely, because Strachey's account of the Bermuda debacle was not published until 1625, so that believers are forced to assume that Shakespeare somehow had access to a private letter containing a much shorter account.
Stritmatter and Kositsky's argument, originally published in 2007, led to predictable attacks from defenders of the orthodox chronology such as Alden Vaughan, who sought to reassure believers that "Malone was right". Shockingly, the editors of the journals concerned refused to allow Stritmatter and Kositsky to reply. Part II of the book therefore responds to the critiques of their argument. The discussion reveals huge confusion within the orthodox position: Malone, for example, assumed an entirely different account of the shipwreck (Jourdain) from the one defended by Vaughan (Strachey).
Malone's old guess about the Bermudan inspiration for The Tempest now appears as an error compounded by subsequent errors, in a way that is all too common in Shakespeare studies. His shipwreck story is finally dead in the water, and The Tempest must be dated prior to 1605. Persuasively argued and meticulously researched, this book marks a major step towards a more realistic chronology of Shakespeare's works.
Read more
12 people found this helpful
Helpful
Comment Report abuse

The Bruce
5.0 out of 5 stars Redating The Tempest
Reviewed in the United States on September 2, 2013
Verified Purchase
A brilliant work of original research that will change forever Shakespeare studies regarding The Tempest. Stritmatter and Kositsky show why The Tempest was written during Elizabeth's reign and first produced on stage in 1603 - rather than in 1611 - as a Shrovetide production under the title The Spanish Maze. They also demonstrate that the primary source for The Tempest is Richard Eden's 1555 edition of Decades of the New World - and not William Strachey's posthumous 1625 edition of The True Reportory of the Wrack and Redemption of Sir Thomas Gates. As part of their evidence demonstrating that The Tempest was written during the Elizabethan period, the authors detail the ways in which the play diverges from the policy of the Jacobean court towards the New World. This is scholarship written with clarity and vigor. The authors prove that much work remains to be done on Shakespeare's plays, 400 years after their appearance on stage.
Read more
16 people found this helpful
Helpful
Comment Report abuse
See all reviews from the United States