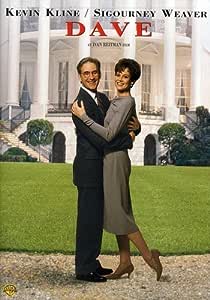 In a nation where anybody can become President, what would happen if somebody gave a nobody the keys to the Oval Office? Academy Award-winner Kevin Kline stars as Dave Kovic, a mild-mannered office manager who looks exactly like the President of The United States--whom he is hired to impersonate. But when a sudden illness waylays the President, Dave's one-night job doesn't end, and he must deal with the hilarious complications of fooling an entire country, as well as an increasingly suspicious First Lady.

4.7 out of 5 stars
4.7 out of 5
2,290 global ratings
How are ratings calculated?
To calculate the overall star rating and percentage breakdown by star, we don’t use a simple average. Instead, our system considers things like how recent a review is and if the reviewer bought the item on Amazon. It also analyzes reviews to verify trustworthiness.

Bass Guy
2.0 out of 5 stars I LOVE this film
Reviewed in the United States on January 29, 2018
Verified Purchase
To be clear: I LOVE this film! I actually have a copy somewhere, but misplaced it, and wanted to watch with a friend, so ordered it on here. What I DIDN'T like was the quality of the streaming copy. It's supposed to be HD, but looks like it was dubbed off a VHS tape. Also, the sound was 'off' from the video here and there, which is very distracting, esp. during close dialogue. I would go as far as to request a credit, it was so bad, but there's no device for that on here. I recommend buying a copy of this on blu ray, or even DVD, it's that good of a film. We all wish we had a president like this in real life!
Read more
20 people found this helpful
Helpful
Comment Report abuse

Tullia
5.0 out of 5 stars Dave, A Perfect President
Reviewed in the United States on May 9, 2020
Verified Purchase
Dave, played by Kevin Kline, is as a president should be. Thoughtful, sympathetic, a man with integrity and a great sense of humor.

The man Dave replaced was corrupt and engaged in fraudulent activities unknown to Dave. The real president had a severe stroke. Dave, who looked exactly like the president, with charm and ease became the president, and started to fulfill many presidential duties much to the annoyance of the Chief of Staff, Bob Alexander, who is seeking to be named Vice President, and eventually president. However, Alexander was involved in the many nefarious deeds with the actual president.

The president's wife, played by Sigourney Weaver, hates her husband, because she knows he is a womanizer, but comes to admire this new president whom she eventually realizes is not her husband.

What ensures is incredible. Watch this film. It's worth your time. The cast is outstanding.

R. WiseTop Contributor: Star Wars
5.0 out of 5 stars A nice clean-up of the original.
Reviewed in the United States on October 2, 2018
Verified Purchase
First off, I love this movie. Kevin Kline is fantastic in the starring role. I had read some negative comments about this Blu Ray edition. These people claim that the video quality is poor, even worse than DVD. I played the Blu Ray; the film sequences as seen in the Special Editions is bad. Really bad. I thought "For once, negative reviewers on Amazon are right.". But then I played the movie and it looks much better. Remember that this film was never filmed in high definition so converting to Blu Ray has its limitations. I played the DVD immediately afterwards. The Blu Ray is slightly better. The sound is the same (I have a 7.2 Bose surround system), but the colours and definition in Blu Ray are better. I was happy with this purchase.
Read more
8 people found this helpful
Helpful
Comment Report abuse

Diaspora
5.0 out of 5 stars This a funny and light comedy
Reviewed in the United States on November 17, 2017
Verified Purchase
This a funny and light comedy. The plot is well done. I can't believe I've never seen the movie in its entirety. I really enjoyed it- a good feel movie at a time where nothing is great about the actual political mileau. Moreover, a 90's movie that is much better than most these days. Watch it.
Read more
7 people found this helpful
Helpful
Comment Report abuse

Kathi Linz
5.0 out of 5 stars Another Old Favorite
Reviewed in the United States on August 26, 2019
Verified Purchase
I've owned this movie in VHS for a long time and finally bought a DVD copy. I love the story of the evil president who has a severe stroke while having an affair with his secretary. The FBI brings in a look alike to pretend to run the country while the chief of staff plots a take over. There are times when I believe a non-politician would do a better job - and this movie shows how it could be done. There's even a scene where the president's wife discovers Dave isn't her real husband. That's funny.
Read more
3 people found this helpful
Helpful
Comment Report abuse

David
4.0 out of 5 stars Good transfer of a light-hearted comedy
Reviewed in the United States on July 4, 2013
Verified Purchase
What would you do if you became President of the United States overnight? Dave Kovic (Kevin Kline) is a likeable guy who runs a temp agency. He also bears an uncanny resemblance to the President. One day, some Secret Service agents show up at his house, recruiting him to act as a double. Dave agrees, but then gets more than he bargained for.

This is a fun, good-hearted movie. Kline is endearing as the underdog who suddenly becomes the Commander and Chief. The supporting cast is also strong, with good performances from Sigourney Weaver, Frank Langella, Ving Rhames, Ben Kingsley and especially Charles Grodin in limited screen time. This comedy manages to steer clear of potty humor and the like that is so common in films today, and instead explores the subject with an almost childlike innocence.

Parental Advisory: Dave is rated PG-13. It does contain one adulterous sex scene that is heard more than seen (there is no nudity). There is another scene where a man is seen showering through fogged glass. His buttocks are visible briefly, but that's all. There is some mild profanity at points and a couple abuses of God's name. Other than these bits, it is a relatively tame movie.

The quality of the Blu-ray transfer is quite good. Details are sharp, and colors are strong. The sound is a little bit soft, however--I had to crank it on my system. The weird thing was that it would not go any higher than a certain point. It sounded no louder at 60 than it did at 30. When there was no background noise, it was okay. But when my wife started doing some stuff in the kitchen, it made it difficult to hear the dialogue at times. Nevertheless, I was still pleased with this Blu-ray. If you are considering an upgrade from DVD, it is worth it.

Dave is a light, heart-warming comedy. It is a good antidote to some of the crass, hit you over the head comedies that are being made these days. I highly recommend it.
Read more
8 people found this helpful
Helpful
Comment Report abuse
See all reviews

E J
5.0 out of 5 stars Dave: A quick review for the Bluray version
Reviewed in the United Kingdom on October 17, 2012
Verified Purchase
This review is only for the new Bluray version:  Dave [Blu-ray] [1993] [US Import ]

I really love this film and I have watched it many times. When I noticed it has come out on Bluray I had to get it.....

The lead actors: Sigourney Weaver...well..let's be honest, anyone who can 'win' a President, figure out how some blue skinned people tick and in particular get the better of a bunch of really nasty Aliens can do no wrong in my book! As an aside, I have to confess I am really perplexed why the Amazon 'Product details' lists many of the movie actors but misses Sigourney Weaver off!? WHY Amazon? Kevin Kline also is a great and engaging actor who is brilliant in his characters and I can't finish without adding Frank Langella again plays his character brilliantly ...fab.

As I said earlier I love the film. In my mind the acting is just 'right' for the type of movie. The plot blends a simple story, sometimes subtle and sometime obvious emotional portrayals, interspersed with some humour and romance.

On a more technical note, I couldn't seem to find out if the import Bluray was region free but I took a chance. I can report my copy, imported from the USA, pays perfectly here in the UK. Assuming this is generally true; I hope this helps any other uncertain UK viewers.

Ok it may be a 'girly' thing but I love a happy ending... break out the popcorn, chocolate and possibly tissues, hit play and I hope you enjoy. :-)
Read more
3 people found this helpful
Report abuse

Amazon Customer
5.0 out of 5 stars Just Brilliant
Reviewed in the United Kingdom on August 30, 2013
Verified Purchase
Kevin Kline perfectly contrasts Bill, the president who is exploiting the system, with the naive but smart stand-in, Dave. This is a true masterpiece that is set aside by its light touch from the general ham-fisted approach to satirising US politics. It reminds us that President is a temp job, so each president should do the right thing while the opportunity is there, because however much he or she regrets each missed opportunity the American people will regret it more and however much he or she may regret failing to get re-elected the American people will not regret an opportunity taken in the first term.
Read more
Report abuse

Amazon Customer
5.0 out of 5 stars Kline does the double
Reviewed in the United Kingdom on November 16, 2018
Verified Purchase
This is a first class film but you do need to believe that it is possible for two blokes to be exact doubles one of the other.

pez
5.0 out of 5 stars kline as president quality film
Reviewed in the United Kingdom on May 3, 2014
Verified Purchase
kevin kline is a great actor so is sigourney weaver some of the comments she makes and the way she looks at kevin kline when she says them are pricless
Read more
Report abuse
See all reviews

Page 1 of 1 Start overPage 1 of 1
Previous page
Next page
Pages with related products. See and discover other items: ben kingsley