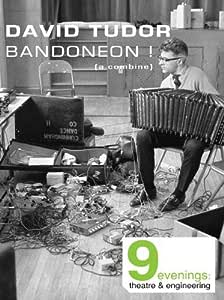 Add to Cart
$24.99
& FREE Shipping on eligible orders. Details
Sold by: Amazon.com
Have one to sell?
Sell on Amazon

Archival footage of David Tudor's gnarly and snarly peformance of "Bandoneon" in 1966 for "9 Evenings: Theatre & Engineering" with accompanying interviews with composers and performers, many of whom participated in this legendary evening.

Review 1: Bandoneon! (a combine) was Tudor’s first complete performance of one of his own works.  The title refers to the type of concertina popular in Tango music(and homage to his mentor, Mauricio Kagel) that Tudor modified to control a series of electronic audio effects, light and projected images brought together in “a combine”, a term coined by Robert Rauschenberg to indicate a work that is neither painting nor sculpture.  ….The performance footage gives the viewer a sense of the cavernous armory where the events took place. .. The footage was captured from multiple perspectives including from behind the audience looking over the entire performance space, from within the performance platform area, and from alongside the floor where the mobile speakers traveled.  The platform footage reveals the technology that went into realizing this performance and shows in-the-moment collaboration occurring as Bandoneon ! was presented.  …This video serves as a fine representation of a highly complex performance.  The in-depth documentary features voice-over interviews with Tudor where explains his work, his methodology, and what informed his thinking.  His contemporaries are also interviewed, supplying additional context for experimental music of the 1960s.  A detailed explanation is provided on how everything worked together to bring about Bandoneon !.  This DVD is essential to any music or art library that support experimental or cutting edge academic creative arts programs.  Bandoneon ! is an important example of the type of collaboration and experimentation that took place during the early years of electronic music.  The opportunity to see David Tudor perform his own composition is also vital to students of experimental music.

Review 2:  I can only imagine how abrasive this sounded back in 1966, and the way the microphones are set to loop each other, the whole thing actually takes on a life of its own.  The results are amazing.  I defy anyone to watch and listen to this material even today and not be blown away.  The fact that all of this is presented by short-haired , serious young men wearing suits makes it all the more disconcerting.  Bandoneon ! (a combine) is an incredibly valuable historical document.

David Tudor (1926-1996) was one of the most radical electronic and experimental composers and musicians of the  the 20th century.  Trained as a classical pianist he specialized in the works of  Cage, Feldman, Stockhausen, Boulez and La Monte Young.  He worked closely with Cage and inspired Cage and other composers to create works especially for him.  He eventually concentrated on composing with electronic instruments often of his own devising.  Upon Cage’s death, he became the music director of the Merce  Cunningham Dance Company continuing the tradition of innovative sound design that characterized that company throughout its history.

scarecrow
VINE VOICE
5.0 out of 5 stars magical moments
Reviewed in the United States on July 10, 2010
Verified Purchase
This is one of those magical moments when things come together, almost the last gasp of the post war avant-garde.

We have David Tudor steeping out of his musician realization interpreter role;He steps out as creator this time in the realization of his own work,Recall, David Tudor was it; the pianist, organist for the repertoire, or Cage, Cardew, Feldman, Wolff, Brown, Cross, Boulez as well; prior to it all.

With admirable cooperative associations and grants from Bell Laboratories, "Bandoneon"(a combine) was where Tudor literally played,inhabited,shaped the acoustics with the 69th Street Armory in New York City;
This is in the late Sixties here when electronics was still in a state of infancy in the amount the gradations of sophisticated concepts creators brought to the medium. Electronics itself still was very primitive, where things frequently burned, and you had elaborate lumbered, oefish set-ups, that did not really produce a configuration of complex associations;, Things we take for granted today, with computer interfacing that can occur literally at multiplicities of (levels), and (planes),there are no layerings happening, things just enter whether intended or not.

Tudor and the Bell Labs Techs keep a tight control over the proceedings, often going over to Tudor to talk, whisper, much like they do as NASA Space Labs, when a missle is in space. The Kennedy-Era glasses, black suites, thin ties give this ambiance you cannot help but nooice, and you forever make this part of the avant-garde at that time. It was generally a fairly conservative cadre working together as much we see today. No pretensions of "GREAT ART", a Utopianism or engaged in binary conceptualizations, like how does something get represented.
The bandoneon, a South American instrument,Accordeon family; Tudor had loved on his tour there with the Merce Cunningham Dance Troup;Tudor brought the tropu out to late night clubs to hear tangos;The instrument was a gift from composer Mauricio Kagel, who had composed a work which Tudor played.
He then fell in love with the performance of it,and the possibilities in hooking it up to d electronics. Tudor makes and re-does, re-conceptualizes much of his own components, as Gordon Mumma,(also a wonderful composer) speaks very well on this DVD,of what is going on, and where the piece came from;of course this is many years later in reflection, as the producers speak well, Julie Martin, and Billy Kluver.

Contact microphones are placed within the bandoneon, there are also other triggers for sound in what looks like silly revolving playful-like objects, that pre-date Star Wars.There are also transducers utilized where electronics signals can be sent to here moving objects, circling round the center performance area; These are simple receptors, controlled on joy sticks by David Behrman among others; These rolling modules interact with the over all overtone"galaxies" happening within the space;It is really at times feedback put at the precipice;where you cannot push it further, so it eternally emits and re-transmits itself; if desired feedbacks it can create loops of sounds,walls of sounds really gorgeous overtones;

The overall effect is like one massive loud,overwhelming uninterrupted wall of sound;I guess you literally had to be there to experience the scale, the sonic dimensions of all this;This DVD gives you a very good documentary experience however;, you never really here the distinct wind timbres of the bandoneon,like its clarinet, flute and bassoons that the instrument is capable. Tudor uses more the "Wind" constitution" of the instrument,you see him simple working the bellows contraction, In-Out;pressing down clusters of buttons;There are two separate keyboards,one Right the other Left,These interact with each other ,when the bellows move creating these impacted clusters incredibly dissonant wall. These clusters then are amplified in a grand way, throughout the space.
Read more
7 people found this helpful
Helpful
Comment Report abuse

Paul Hunt
3.0 out of 5 stars Experimental Excess
Reviewed in the United States on February 15, 2017
Verified Purchase
The Editorial Reviews in the item description cover the story of this DVD well, and it deserves attention as an archive of an historic experiment in avant garde music of the time. Indeed, there is some very interesting footage of the preparation and composing that preceded the performance which shows a range of sound control concepts available with technology play. However, only a very small portion of the actual performance is presented, and it simply shows that the piling on of broadband noise makers into the cavernous Armory space predictably created a dense endless reverb resulting in an inability to hear distinctions or information.
John Cage (together with David Tudor and others) presented "Variations VII" at the same Armory performance series, and the available video of that performance documents a more successful performance, in my opinion, because the generated sound projected into the space is a bit less dense and allowed for the space to breathe a bit more that Tudor's "Bandoneon".
Read more
One person found this helpful
Helpful
Comment Report abuse
See all reviews