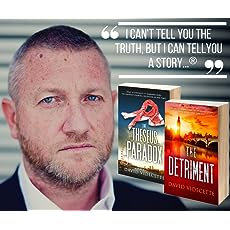 "I went out to work one day and came home two weeks later wearing the same clothes and with fifty-six people dead."

A former Scotland Yard investigator with the Metropolitan Police, David has worked on a wealth of infamous cases. He's chased numerous dangerous criminals, placed bugs on vehicles, searched hundreds of properties and interviewed thousands of witnesses.

Want to win a copy of David's next thriller?
Visit: http://www.davidvidecette.com/title-reveal

With twenty years' police experience, including counter-terror operations and organised crime, David was a detective on the Anti-Terrorist Branch during the 7/7 London bombings.

Today he uses his police experience in his writing as the author of the DI Jake Flannagan thriller series starting with 'The Theseus Paradox'. The truth behind the fiction was investigated by The Sunday Telegraph and ITV News.

DI Jake Flannagan and his girlfriend Claire, return in 'The Detriment'.

David lives in London. He currently consults on security operations for high-net-worth individuals and is a key media commentator on crime, terrorism and policing for many broadcasters and newspapers, both nationally and internationally.

You can find out more about him here:

Want to win a copy of David's next thriller? Sign up to his newsletter at: http://www.davidvidecette.com/title-reveal
Read more 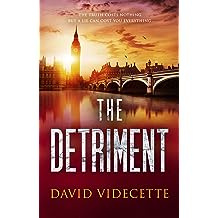 THE DETRIMENT: The compelling detective thriller based on real events (DI Jake Flannagan Book 2) (DETECTIVE INSPECTOR JAKE FLANNAGAN SERIES) Jun 29, 2017
by David Videcette
( 153 )
$2.99
"I can't tell you the truth, but I can tell you a story..." ®

How much is real and how much is fiction, only YOU can decide!

A cold, dead body stares skyward from a rose garden in the grounds of a luxury London apartment. What secrets does the dead man hold? Is it suicide, or did someone want him silenced?

Hours later, an attack on a nearby nightclub sparks a massive manhunt which ends as a blazing Jeep ploughs into Glasgow Airport.

Claire, DI Jake Flannagan’s evasive girlfriend, is back to explain why she disappeared. But as they begin to unravel a real-life mystery together, the dark secrets of her past threaten to destroy their futures. What they uncover may put their relationship, their careers, and even their lives at risk.

The truth costs nothing, but a lie could cost them everything…

• Why did Claire really go missing?
• Is she telling the truth with the explanation for her sudden and puzzling disappearance?
• Does she have secrets that are deeper than they first appear?

Intrigue, lies and fear of the unknown
Sometimes the answer is much closer to home…


From the author of ‘The Theseus Paradox’, the smash-hit 7/7 thriller based on true events, comes the sequel about a real-life mystery that threatens to destroy a nation. Detective Inspector Jake Flannagan must uncover how a series of astonishing events are inextricably linked, before the past closes in on him.

We all have secrets we say we’ll never tell…

What people are saying about author, David Videcette:

“Videcette has the hallmarks of being a dangerous storyteller.” - Crimesquad.com

David Videcette is a former Scotland Yard investigator who has worked on a wealth of infamous cases, including the 7/7 London bombings. With twenty years’ policing experience, he is an expert on terrorism and organised crime.

I can’t tell you the truth, but I can tell you a story… ® 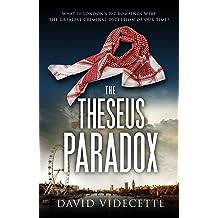 How much is real and how much is fiction, only YOU can decide!


July 2005: in the midst of Operation Theseus, the largest police investigation that the UK has ever known, Detective Inspector Jake Flannagan begins to ask difficult questions that lead to the mysterious disappearance of his girlfriend and his sudden suspension from the Metropolitan Police.


While hunting for the answers to the most complex case in British history, one man will uncover the greatest criminal deception of our time.


The author, David Videcette, is a former Scotland Yard Detective who has worked on a wealth of infamous cases, including the July 2005 London bombings. He has twenty years of policing and investigative experience, specialising in counter-terrorist operations and organised crime. He currently consults on security operations for high-net-worth individuals and is an expert media commentator on crime, terrorism, extremism and the London 7/7 and 21/7 bombings. David says, ‘I can’t tell you the truth, but I can tell you a story…’

'A chillingly credible tale based on real events.'

'Leaves the reader hungry to research this version of events!'

'This fictional theory holds a lot of water - do not miss!'

'A powerhouse of a fact-fiction mash-up.'

'Brilliant stuff that smacks you in the face!'