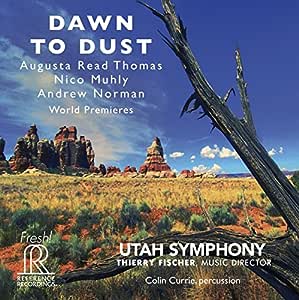 Share
Only 2 left in stock (more on the way).
Qty:1
Add to Cart
Buy Now

Secure transaction
Your transaction is secure
We work hard to protect your security and privacy. Our payment security system encrypts your information during transmission. We don’t share your credit card details with third-party sellers, and we don’t sell your information to others. Learn more
Details
Ships from
Amazon.com
Sold by
Amazon.com
Dawn to Dust has been added to your Cart

DVORAK / TCHAIKOVSKY (Artist) Format: Audio CD
5.0 out of 5 stars 5 ratings
See all 7 formats and editions Hide other formats and editions
Includes FREE MP3 version of this album.&nbspProvided by Amazon Digital Services LLC. Terms and Conditions. Does not apply to gift orders.&nbspComplete your purchase to save the MP3 version to your music library.
Available at a lower price from other sellers that may not offer free Prime shipping.

Daniel R. Coombs
5.0 out of 5 stars A very entertaining collection of modern works and attention getting performances!
Reviewed in the United States on May 26, 2016
This is a beautiful and rewarding collection of some modern works that I think anyone would enjoy. Equally rewarding and a little surprising here is the performance by the Utah Symphony under Thierry Fischer. I say that only because I admit I have not heard anything from Utah in quite some time. They are an excellent and skilled ensemble! The real reason to get this album though is, indeed, the music. Esteemed veteran American composer Augusta Read Thomas has produced many wonderful works for a long time. Her "ballet for orchestra" 'EOS' is based on the stories of the Greek goddess of the dawn. Each of the seven connected movements is a shimmering small scale portrait of light and of Eos' traversing the sky. It is sublimely orchestrated and quite beautiful throughout. A similar impression is left by the young and hyper-talented American Nico Muhly with his "Control - Five Landscapes for Orchestra." In this case, Muhly evokes some of the natural beauty and culture of the Utah landscape. He admits to paying a somewhat indirect homage to Messiaen's "Canyon of the Stars" - also based on the beauty of the southwest sky and vista. Muhly's style is consistently gripping with touches of minimalism, beautiful harmonies and lush orchestrations.This is another very fine work! This wonderful collection closes with Andrew Norman's "Switch" for percussion and orchestra, played here by the always stunning Colin Currie. This is an exciting and, at times, nearly out of control whirlwind of a piece that serves as a complete showpiece for both the soloist as well as the orchestra. I was less familiar with Norman as I was with Thomas and Muhly but I am certainly motivated to go seek out more of his music. All three of these works were commissioned by the Utah Symphony and this is a truly rewarding disc. As I said, I am very impressed by the Utah Symphony as well as by these three incredible pieces. Highly recommended!
Read more
8 people found this helpful
Helpful
Report abuse

Roy Kalish
5.0 out of 5 stars Exciting new orchestral music by 3 of America's most revered composers.
Reviewed in the United States on October 23, 2016
These 3 works by American composers are all world premiers commissioned by the Utah symphony. They are brilliantly orchestrated,but quite accessible .
The first work is EOS{Goddess of Dawn} by Augusta Read Thomas in 7 short movements.
The first and longest {4:45} movement."Dawn"starts off with slow moving chords,then proceeds into a fast,playful section with ringing percussion,and themes tossed around different sections of the orchestra.
The second and third movements "Daybright and "Firebright" and the aptly named "Shimmering",have some lovely impressionistic. orchestral textures.The next movement,"Dreams and Memories"is a nostalgic sounding slow section dominated by strings and harp,and ending on low strings.
Next comes "Spring Rain",another winsome movement with frequently changing rhythms and orchestration.
"""Golden Chariot" is another short presto that goes directly into the last and shortest movement"Sunlight"ending optimistically and abruptly.
This work is more listener friendly than some of her austere and somber orchestral works that I've heard,but just as colorfully orchestrated.colorful..
The next piece"Control{Five Landscapes for Orchestra}in 5 movements by the popular Nico Muhly{1981-} begins with the atmospheric"Landform"and features slow brass in the lower registers,along with staccato mallet percussion ending quietly
The next part, "Mountain".is one Muhly's slow,haunting" somewhat Ivesian pieces moving frequently between consonance and dissonance,ending with tuba and piano.
The third section,"Beehive" is another busy scherzo with complex Morse code like rhythms.{Muhly states in the liner notes that"Utah claims one of the first telegrams ever sent.}The second half of this part is dominated by a trio of trumpets,followed by oboes and lastly flutes.This movement ends on solo cello and triangles and woodblocks.
Petroglyph and Tobacco" is a more minimal sounding piece featuring."hocketing between different families of the orchestra"as the composer states.It s the most American sounding piece on the entire cd.A native American Ute song melody is quoted in this movement played by trombone with percussive tinkling in the background.
The last movement,"Red Dust" is a mostly quiet,impressionistic,piece based on a simple chord progression that goes through many changes,and is a great conclusion to this strikingly original composition.
Ives,Messiaen,,Copland and others are influences in this work,but Muhly has a style all his own.
The third and last work is "Switch" for percussion and orchestra by "Andrew Norman{!979}.It is in a similar style to his dynamic widely praised masterpiece, "Play" for orchestra.
Norman's music is complex and busy sounding with moments of calm stillness and always fascinating listening.
""Switch" is certainly no exception..The frequently changing ,rhythms,dynamics and colors that norman produces from a large symphony orchestra are truly amazing.
The first part of "Switch" is fast-paced and is a real workout for the percussionist playing numerous instruments along with the orchestra.
The second section is slow with surprisingly neo-romantic strings ,as well as alternating quiet and more boisterous sections,and then back to another fast romp with jazzy rhythms and repeated motifs.
The work ends with 6 minutes of placid music consisting of a mysterious sounding melody on the vibraphone,with occasional passages for strings and gong,,ending with full orchestra and steel drums.
Mr.Norman's orchestral prowess never ceases to amaze me.
Thierry Fischer and the Utah symphony are absolutely flawless,and have released one of the best orchestral discs of mixed composers of the decade,
Do not miss this one.
Read more
7 people found this helpful
Helpful
Report abuse

DLEV
5.0 out of 5 stars Contemporary, but very approachable
Reviewed in the United States on July 26, 2019
As a fan of classical from the mid to late 20th century, up through contemporary eras, I like quite a bit of 'thorny' music.

But this is not in that category. The 3 pieces on this recording, are quite approachable, and a very rewarding listen. I believe they should appeal to even those that are the most skittish of contemporary music.

The performance by the Utah Symphony is energetic, and almost perfect for these pieces. It is hard to imagine one of the big orchestras from the US doing any better.

As far as the recording itself, this is on the reference Recording label, which is one of the best in the world. The soundstage is deep and wide (it extends beyond the outside edges of my speakers), individual instruments are placed accurately within that soundstage, hall ambience is completely present, dynamic range, detail, attack and decay, etc are all these. So, not only is the music great, but the recording is an audiophile's dream.
Read more
One person found this helpful
Helpful
Report abuse
See all reviews

Mr. R. Allen
5.0 out of 5 stars Challenging and adventurous music making.
Reviewed in the United Kingdom on April 29, 2016
Verified Purchase
A challenging programme of serious music from four of America's leading composers. You will be challenged and stimulated but never disappointed by these pieces. Something here for a range of adventurous listeners. Very well performed by the Utah Orchestra under their new chief conductor.
Read more
One person found this helpful
Report abuse
See all reviews