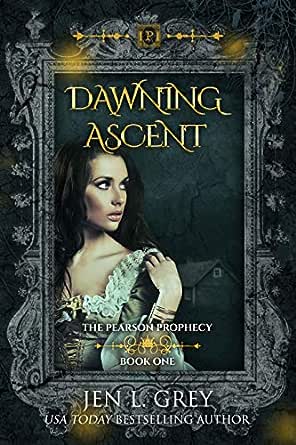 You've subscribed to The Pearson Prophecy! We will preorder your items within 24 hours of when they become available. When new books are released, we'll charge your default payment method for the lowest price available during the pre-order period.
Update your device or payment method, cancel individual pre-orders or your subscription at
Your Memberships & Subscriptions
There was an error. We were unable to process your subscription due to an error. Please refresh and try again. 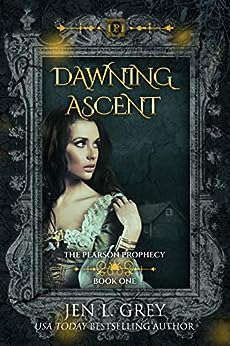 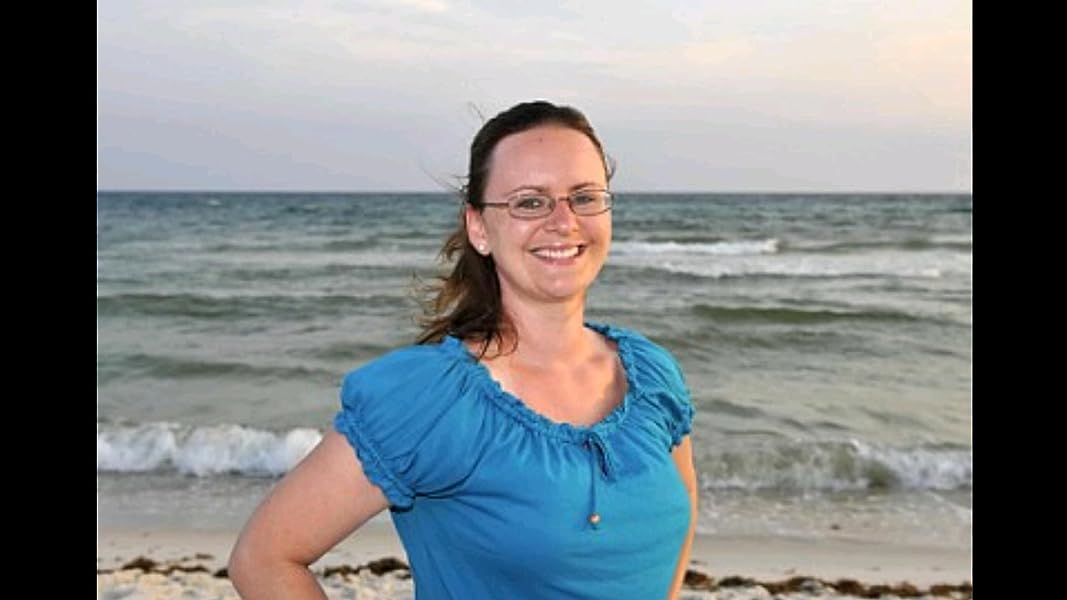 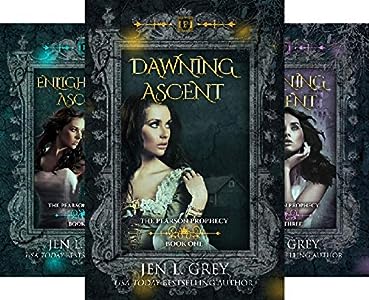 4.3 out of 5 stars
4.3 out of 5
102 global ratings
How are ratings calculated?
To calculate the overall star rating and percentage breakdown by star, we don’t use a simple average. Instead, our system considers things like how recent a review is and if the reviewer bought the item on Amazon. It also analyzes reviews to verify trustworthiness.
Top reviews

Melissa Williams
5.0 out of 5 stars Great Debut Novel
Reviewed in the United States on December 2, 2017
Verified Purchase
Destiny seems to have made Ariah Pearson, the middle child and oldest daughter of the King’s advisor, the mere sister of the future Savior. But Ariah has strong elemental powers of her own that she must learn to control and love for a boy she knows she may never be with.

This was a very good debut novel by Jen L. Grey! The prologue starts off nicely by giving background on the Pearson Prophecy that so much affects the events of Dawning Ascent. Unlike the rest of the novel, you get viewpoints from a few players. The rest is told in first person from Ariah’s POV as she becomes accustomed to not only being the Savior’s sister, but also realizing her powers and feelings. More or less, it is a coming-of-age story set in a fantasy world where women are elemental magic wielders. It is also full of interesting side characters—my favorites being her say-it-like-it-is best friend, Claire, and the charming foreign prince, Sam. There also seems to be some underlying political intrigue/plots brewing that I look forward to seeing more of in Book 2.

I have to admit that I did, however, need to get used to reading first person POV in present tense. I am more used to first person still being in narrative past tense. But after awhile, I got used to it. There is also a love triangle, which can be overdone, and while the men involved can be a bit dramatic at times, I think Grey pulls it off well in a way that flows with the characters’ personalities.

Alyssa Dietrich
4.0 out of 5 stars Great debut
Reviewed in the United States on November 30, 2017
Verified Purchase
Let me start by saying, I believe this is the authors debut book, and what a debut it is! I found myself completely surprised with how much I enjoyed this book. If you are a fantasy lover it seems there are many books and many more that start a book with a young girl and a prophecy. However there were enough elements of surprise in this book for me to keep it original. 4 star rating for the beginning feeling a bit muddled as I was trying to figure everything out. This clears up within a couple of chapters and is a nice smooth and exciting read from then on out!
Read more
3 people found this helpful
Helpful
Comment Report abuse

Jill-Ann Guyette
5.0 out of 5 stars Pearson Prophecy leaves you wanting more
Reviewed in the United States on November 26, 2017
Verified Purchase
I wasn't sure what to expect from the Pearson Prophecy but once I started I could not put it down! From the beginning I felt like the prophecy was misunderstood. The ending of the book has me almost convinced that I'm right but I now have to wait to find out. The character development of Ariah and her relationships have you wanting more with every turn of the page. Her bond with her brother Logan, her friendship with Claire and even her short interactions with her baby sister Emerson just make you root for her. Her heart is pure and she is just 18. She has been mistreated and underestimated. Her powers grow substantially throughout the book and she begins to trust her gut just a little more.
Her "death" at the end was surprising and unexpected. It makes you wonder what will happen next. What will the King do when he realizes his mistakes. And of course, will she end up with Sam?! I must know.
I also want to see if Gabe realizes he's being a complete toolshed and comes to see the error in his ways and goes back to his wife who still loves him and hopes everyday for his homecoming.
Bring on book 2 Jen!!! I can't wait to read more!
Read more
2 people found this helpful
Helpful
Comment Report abuse

Miranda Brock
5.0 out of 5 stars A fantastic start to a new series!
Reviewed in the United States on November 21, 2017
Verified Purchase
Jen L. Grey has woven a tantalizing cacophony of magic and strife in her debut novel, Dawning Ascent. Ariah, the heroine of this tale, gets caught up in a tangled web of forbidden romance, social order, and jealousy. You can't help but get swept away in the rollercoaster of emotions as she struggles to not only overcome the King's hatred toward her and her family, but Ariah's journey to find herself, as well. With only a few close allies, including her devoted brother, Logan, Ariah must learn to control her magic and tap into her inner strength. The rise and fall of heartache and triumph will have you anxiously turning the pages for more. Dawning Ascent is a fabulous read. If you love magic, romance, and beautifully constructed characters, don't hesitate to snag this book!
Read more
2 people found this helpful
Helpful
Comment Report abuse

Books All Things Paranormal And Romance
5.0 out of 5 stars Exciting Bold Unique ~
Reviewed in the United States on June 19, 2018
Verified Purchase
This author was a pleasant surprise, I was thrown into this world of suttle yet powerful magic. I was instantly intrigued with the mystery going on within the story being told, this author introduces this story to you beautifully. Where she just grabs your reading tendrils and draws you into her world.
Her characters are bold and unique and you can feel them bringing it altogether to create this incredible experience,where your imagination opens up to see how they live and the beauty and cruelness of the world they live in.
This story continues to fall hand in hand as it unfolds,the flow and the style of the book is fun and exciting. You can feel the story building and you know it's building itself into something great, it's like you can feel the tides are on the edge of turning and yet you have no idea how it will work out or the effect and impact it will have.
I found this story wasn't boring! It was not repetitive or a cliche!
I found it was fresh Exciting and Bold!
I want more of this story I want to see how this incredible story we are seeing built turns out.

april
1.0 out of 5 stars odd
Reviewed in the United Kingdom on February 24, 2018
Verified Purchase
full of strange language quirks..."laying" does not mean "lying", and in this magic world it is odd to "stay under the radar" when there is no science or technical skill at all..."me and L" do not do anything ...it would be "I and L" who do something...and so on...almost every page has a strange, or ungrammatical, oddity, which makes it hard to allow the story to flow as it should...it keeps getting interrupted by sudden questions, odd actions, weird attitudes towards characters, perplexing motivations and disruptive behaviour...this needs a tough editor...i could not enjoy it, sorry...
Read more
Report abuse

Kindle Customer
5.0 out of 5 stars Wow! Must read!
Reviewed in Australia on December 7, 2017
Verified Purchase
Such a great read!
if your looking for a longer read this is one to read!
Starting off with the prophecy of the saviour being born, the last of 3 children.
Now grown up Ariah and Logan hid in the shadow of their younger sister the saviour or so she is believed.
Young love comes alive for Ariah her childhood friend who also is the prince.
What will Ariah do when her Prince is meant to marry your sister and there is another Prince showing interest. Going from hiding under the radar to being the beacon drawing all sorts of unwanted attention.
To top things off her powers are going crazy growing stronger each time she uses her powers! this is a must read!!
Read more
One person found this helpful
Report abuse

SamMac
5.0 out of 5 stars Loved it.
Reviewed in Australia on December 26, 2017
Verified Purchase
Loved this book!! Love the MC, Ariah straight away. Was caught up in the story from chapter 1. There is plenty of action and a little romance. I now need to catch up on sleep as powered through the night to finish this story. Well done. Can’t wait for book #2.
Read more
One person found this helpful
Report abuse
See all reviews