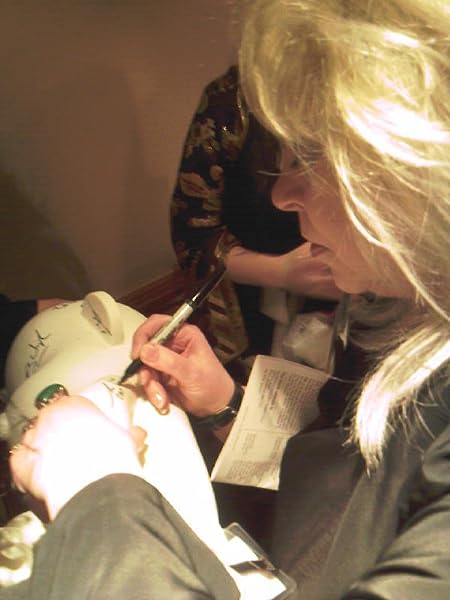 by Tanith Lee (Author)
4.1 out of 5 stars 11 ratings
See all formats and editions
Sorry, there was a problem loading this page. Try again.
The planet did not rotate. One side eternal day, the sun shining down hotly from the center of the heavens. On the opposite side eternal night, the stars glowing cold in the black and airless sky. Yet the planet had been colonized. In ages past civilization had dug into the rock of the dark side and had thrived. Aristocrats vied with aristocrats, and the poor as ever, struggled to keep home and body together against the ever-encroaching cold surface. To keep the lower classes happy, Vitra, the storyteller, spun romantic sagas on the popular network. She imagined a strange world on the sun side, inhabited by men and women enmeshed in crime and love, schemes and intrigues. But had she imagined this?
Read more
Previous page
Next page

Tanith Lee (19 September 1947 – 24 May 2015) was a British writer of science fiction, horror, and fantasy. She was the author of over 90 novels and 300 short stories, a children's picture book (Animal Castle), and many poems. She also wrote two episodes of the BBC science fiction series Blake's 7. She was the first woman to win the British Fantasy Award best novel award (also known as the August Derleth Award), for her book Death's Master (1980).

Amazon Customer
3.0 out of 5 stars Slow, Disappointing
Reviewed in the United States on September 5, 2010
My experience with Tanith Lee's novels is rather hit and miss, and I'm afraid this one falls into the latter category. Only my love of some of her other works kept me reading until the end - to be ultimately disappointed.This is actually two stories; in one the vapid Vitra is a Fabulast who lives on the dark side of the planet, and she is writing a story about the spoiled Vel Thaidis who lives on the light side of the planet. Or is it a story? After a crime is committed in each world, the stories strangely take on a life of their own - which is explained in the last chapter.Definitely not Lee's best work, but you can see shadows of concepts explored more fully in other books, like the spoiled teens from Don't Bite the Sun (Starmont Hardcover Collection, No 1) and the evil (almost incestuous) twins of The Silver Metal Lover. She hints at the eroticism that is an integral part of her other works, but never delivers.
Images in this review

Lady Trinity
5.0 out of 5 stars Amazingly underrated story
Reviewed in the United States 🇺🇸 on May 29, 2014
Verified Purchase
Of all Tanith Lee's myriad works, this one is my enduring favorite--I've read it at least twice a year for probably ten years. Knowing it's secrets only enhances it, and allows the reader to savor it's nuances anew with each re-reading. I can't believe it has never been reprinted (the unfortunate cover art of this paperback is definitely NOT one of it's best features, and may even mislead the reader into thinking this is science fiction, when to me it is much more firmly rooted in the fantasy genre).
It is a travesty to me that this book has been so overlooked; I can only assume this is because it was one of her earlier works, and not discovered by enough readers to give it the acclaim it deserves. If you haven't read it, you are missing one of Ms. Lee's best flights of fancy.
I'm not going to give a plot synopsis, I'll only say that this is an amazingly detailed, subtle story that is crying loudly to be made into a film (Christopher Nolan, with his love of twist endings, would be my choice). If you are a Tanith Lee fan who has overlooked this novel, read it I beg you. Even for those who are not bona fide fans, or find her prose too complicated--this is an easy read--lyrical but slightly less obscure than some of her work.

Lady Trinity
5.0 out of 5 stars It is amazing to me that this book has been dismissed as ...
Reviewed in the United States 🇺🇸 on May 10, 2016
It is amazing to me that this book has been dismissed as one of Tanith Lee's lesser works, when--to me--it is one of her absolute best. True, it doesn't have the kind of dreamlike imagery that characterizes so many of her works, but it is an absolutely mesmerizing story about two imaginary societies, and their skewed class systems that will leave an absolutely indelible impression on the reader's imagination.
Going by the extremely odd, old fashioned cover of this vintage paperback, one gets the idea that this is a science fiction story, when in fact is it primarily a fantasy, with only the thinnest glaze of sci-fi. I think that when this book came out, publishers simply didn't know quite what to do with Tanith Lee's eclectic talent, and tried to stuff her various works into whatever genre seemed easiest.
Suffice it to say that this is a criminally overlooked novel that I generally reread at least once a year, and it seems as fresh and compelling on the thirtieth reading as it did on the first. For awhile, it was available very cheaply, but since it has been out of print so long the cost has risen with it's rarity. If anyone is listening out there--this book desperately needs to be reprinted and given another chance to capture the fantasy reader's heart in the way it deserves.
As an aside: what has obsessed me since becoming familiar with his film-making is that this book would provide director Christopher Nolan with an amazing opportunity to make his first fantasy film, since it employs something he is so fond of--not just one startling twist ending, but three different ones, as well as a rich , baroque imagery that would create a truly dazzling film
That idea notwithstanding, if you get the opportunity to read this novel, definitely do so. It is excellent.
Read more
Helpful
Report abuse

Melissa McCauley
VINE VOICE
3.0 out of 5 stars Slow, Disappointing
Reviewed in the United States 🇺🇸 on September 5, 2010
My experience with Tanith Lee's novels is rather hit and miss, and I'm afraid this one falls into the latter category. Only my love of some of her other works kept me reading until the end - to be ultimately disappointed.

Definitely not Lee's best work, but you can see shadows of concepts explored more fully in other books, like the spoiled teens from  Don't Bite the Sun (Starmont Hardcover Collection, No 1)  and the evil (almost incestuous) twins of  The Silver Metal Lover . She hints at the eroticism that is an integral part of her other works, but never delivers.
Read more

3.0 out of 5 stars Slow, Disappointing
By Melissa McCauley on September 5, 2010
My experience with Tanith Lee's novels is rather hit and miss, and I'm afraid this one falls into the latter category. Only my love of some of her other works kept me reading until the end - to be ultimately disappointed.

Definitely not Lee's best work, but you can see shadows of concepts explored more fully in other books, like the spoiled teens from [[ASIN:1557420440 Don't Bite the Sun (Starmont Hardcover Collection, No 1)]] and the evil (almost incestuous) twins of [[ASIN:0553581279 The Silver Metal Lover]]. She hints at the eroticism that is an integral part of her other works, but never delivers.

some kind of strange
5.0 out of 5 stars What a trip!
Reviewed in the United States 🇺🇸 on February 8, 2007
First off let me say I love love LOVE Tanith Lee's writing. She really gets beneath the character's skin and into their minds, and her descriptions are very real and often quite detailed. This book is no different and I really enjoyed it.

It is set on a planet which does not rotate, one side which is eternal day the other eternal night. The villainous Vitra Klovez is a Fabulast, royal story teller for the poor workers of the Subterior (basically a ghetto) whom she considers to be "worms". She tells a tale of the sun side of the planet, and for her own amusement uses people in her world as characters for her to toy within her imaginary one. Once character is Ceedres Thar who derives from prince Casrus Klarn in her world, she is in love with Casrus but he does not share the same feelings for her, for he sees past her beauty for what she really is: a pretty piece of tin. Therefore she makes Ceedres evil in her story, and her own replica of herself Vel Thaidis the heroine, but as you will find out it is really the other way around. Soon both the Fabulism and Vitra's world seem to be intersecting, and as is hinted you'll see that Vitra is not the one controlling the tale.

My favorite character in this story is Casrus Klarn, who's guilt for the pain and the suffering of the people of the Subterior, no matter how cruel they become, leads him to help them. To tell you the truth I'm unsure of how I feel about the ending, if I thought it was a cop out or not. However, this story kept me hooked through until the last page. A keeper for me.
Read more
Helpful
Report abuse
See all reviews