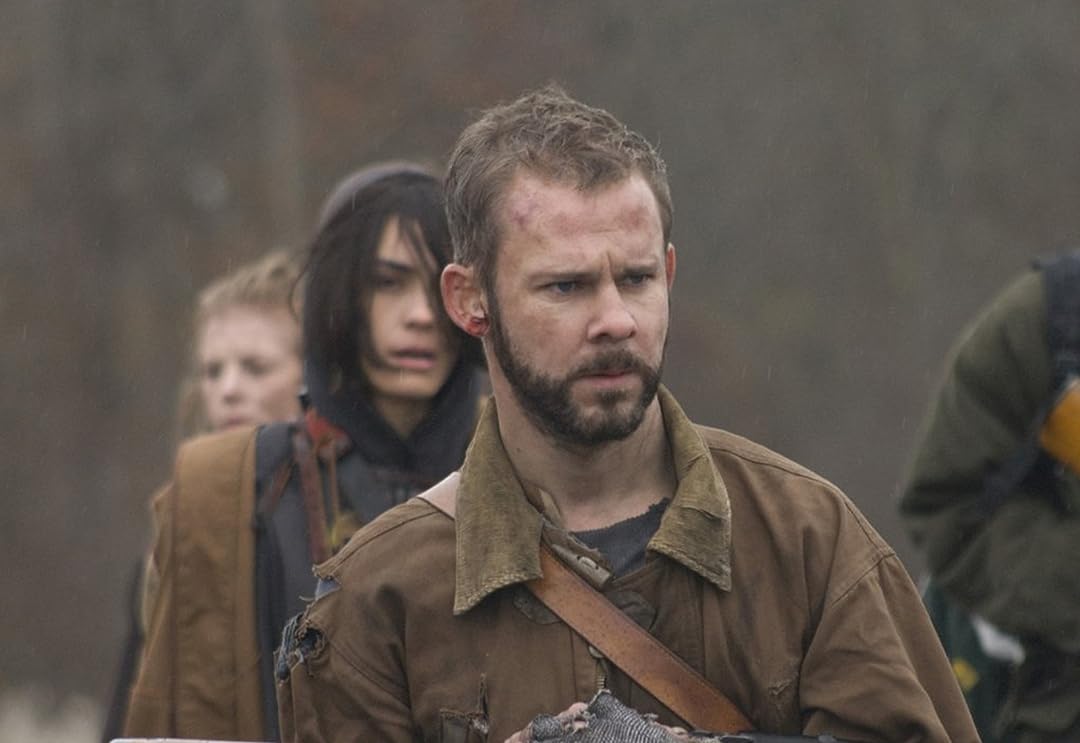 joe rReviewed in the United States on August 12, 2018
5.0 out of 5 stars
At the very top of the genre. Well worth watching
Verified purchase
There's a million of these cheap post apocalyptic survival horrorshows out there now. 99% of them are cheap trash.
This is a definite 1%-er. Believable in the world it's set in, well thought out (tugs on both your mind and your heart strings.) The characters, good guys, bad guys and shades of grey guys, are all people you can care about and have their own stories.
I've come to find pretty recently that you can count on a movie with Ashley Bell in it to be something worth your time. And she creates a great character here.
And NO DAMN ZOMBIES! But plenty to push the horror-craving buttons.And all the blood and guts anybody could ever ask for

johnfReviewed in the United States on March 10, 2016
4.0 out of 5 stars
Good, small budget apocalyptic film. Note: basically shot in black & white.
Verified purchase
This is a variant of the post-apocalyptic genre, though it was originally scripted as a zombie movie. With so many zombie movies being made lately the zombies were changed to a gang of cannibals and production began. This is not save it from becoming a straight to video release though. As these kinds of films go it was pretty good once you factor in its small budget; it's no Book of Eli or The Road and has to stick with a small group of survivors and a larger group of cannibals in an isolated farmhouse setting; no ruined cities or bumper to bumper lines of cars rusting away. If you lower your expectations from those kinds of things it's a taut and mostly fast paced drama.

This film divides audiences with some finding it too much of a character film than an action film, though once the action commences toward the last third of the film it's pretty intense. Conversely, some feel there is not enough character development and think the film needed to be longer. The biggest controversy involves the cinematography. The production team opted for a color-bleached look much like The Road and Book of Eli, but instead of their sepia look they took it further and made what is in most respects a black and white film. Yes, a little color comes through now and then, but this is still a black and white film and many people don't like that. The box is also at fault for not making clear enough just how black and white this is.

Dominic Monaghan (Lost; Lord of the Rings) was one of the producers as well as acting in the film and he is a welcome presence. The rest of the acting is good, with Ashey Bell's Mary a standout as a lady you don't want to mess with. There are a few surprises and a grim and somewhat shocking ending. It moves by quickly with its bare bones simple story but is effective nonetheless. I tend to like apocalyptic/zombie movies to be as "real" as possible given the scenario. I tend not to like effects laden films with lots of effects and highly improbable villains like Doomday or Mad Max. These can be enjoyed as comic book fare but I don't find them satisfying, purely personal taste. If there were some kind of apocalypse with just a few survivors, this is what it would be like. Simple, basic, no motorcycles or vehicles, no punk rock gear or giant headquarters. I'm sure the simple realism here that I like is also what many people don't like about the film and I understand that.

If you can accept it on its terms it's an interesting film.

The PiratefishReviewed in the United States on February 5, 2014
3.0 out of 5 stars
Almost, But Not Quite
Verified purchase
The movie is alright if you enjoy the genre, but there are better.

The acting is passable, but a little stiff, and the characters were a bit too formulaic for my tastes (the silent, tough type with a mysterious past, the grieving husband/father full of bitterness and anger, the token black guy, and the selfish, shallow woman who gets hers in the end).

The action is not the most plausible, with the characters often doing things that no one in their right mind would do in similar situations (i.e. wasting ammo, not shooting at opportune moments, or walking along the open road, loudly yacking away in a countryside known to be crawling with cannibals who are skilled at tracking). The plot has several other holes as well, the biggest of which is the cannibal clan's survival strategy: sacrificing 30 or so of their group to capture maybe 3 or 4 people for food. Even if they consume their own dead, they have enough fodder to pull that kind of operation maybe once or twice before the jig is up. And that doesn't even account for the fact that a small, divided band of untrained klutzes can dispatch nearly their entire force after getting trapped in a location specifically designed by the cannibals themselves. Seriously, was this the cannibal clan's first rodeo? If so, they won't survive such a steep learning curve.

In all, though, it's a great movie for people who don't want to do a lot of thinking and are content with just passable entertainment. I don't regret having watched it, but I won't watch it again either. Rent this on a slow night, but don't add it to your collection. (And also don't pay more than $2.99 to see it).
8 people found this helpful
Report abuse

Cyril J. MartinezReviewed in the United States on May 26, 2016
4.0 out of 5 stars
Not to be missed by lovers of post apocalypse movie fans.
Verified purchase
As a fan of post apocalypse movies this one stood out for several reasons.
One, you had an experienced cast of actors.
Two : Good direction and mood lighting of shades of greys and light blues with very little other color giving the feel of a world gone wrong.
Synopsis : A band of young people wander the countryside in look of food and shelter not to mention protection from roving bands of thieves, murders and yes, cannibals.
What do you expect with no more governments and food in short supply ?
Plenty of action and conflict with a nice twist at the end of the movie.
Highly recommend for fans of this genre of movies.
5 people found this helpful
Report abuse

Mark J. HouseReviewed in the United States on April 28, 2015
5.0 out of 5 stars
One Heck of a Day
Verified purchase
Variety says "The Day is one of the most effective horror movies made in years". Five people armed with guns and wits roam through the destruction of a post-apocalyptic wasteland that is now America. Earth's population has dwindled due to warfare planet wide. They find what seems to be shelter but in fact turns out to be a nightmare! If you like The Walking Dead or The Road, you will love this! A very similar concept!
11 people found this helpful
Report abuse

DSReviewed in the United States on January 15, 2014
4.0 out of 5 stars
Apocalyptic story, great characters, decent story for low budget...
Verified purchase
Great character development for female lead, well played by Ashley Bell (Mary).....I found myself looking to see if there were any plans for a sequel. Story is sci-fi, horror concept: the world has suffered so badly that there is no food and people have turned into one of 2 factions...the cannibals and the non-cannibals. Think along the lines of the book One Second After by William R. Forstchen...in that story the world has suffered an EMP (electro magnetic pulse) and nothing electronic works, there's not enough food for all the people, starvation and violence are rampant. In The Day, the writers never explain exactly what happened to cause the starvation and it seems enough to just go with the idea. We follow a group of 5 wanderers (regular people) who wander into a situation where they must confront their stalkers. Actors Ashley Bell and Shawn Ashmore (Adam) are the only characters with enough to do to push this little indie film towards greatness. Note to the writer, director, producers: great job working with what you had! Glad you all didn't peak out too soon ;o) Challenge to these same writers, director, producers: now go out and make some more...and do it even better. I believe in you!
One person found this helpful
Report abuse

Whatever the apocalypse was isn't explained; an explanation is unnecessary. An apocalypse happened and we are just looking at one small scene from that world.

A couple of commenters had legitimate complaints, for one, the cgi flames were realistic but the object on fire didn't appear to be being consumed. Another was that the antagonist's had no firearms. To the latter I supplied the explanation that as it has been ten years since the apocalypse the antagonists [of which multiple different clans exist] totally deplete the resources in their domain, including ammunition.

The ending is great. I wouldn't look for a sequel. I hope a sequel isn't made. I, being of somewhat limited imagination, and based on what this movie presented, imagine a sequel would be something like Mad Max: Beyond Thunderdome.
Report abuse

Avid ReaderReviewed in the United States on January 25, 2021
5.0 out of 5 stars
An excellent story
Verified purchase
I enjoy this, one of the few movies I've watched several times because it's story telling in a manner I find enjoyable, personal, grim, gritty, and abrupt without over the top stunts and horseshit. The violence is a bit understated, from my perspective, but there's enough going on that will keep a viewer's interest.
Report abuse
See all reviews
Back to top
Get to Know Us
Make Money with Us
Amazon Payment Products
Let Us Help You
EnglishChoose a language for shopping. United StatesChoose a country/region for shopping.
© 1996-2021, Amazon.com, Inc. or its affiliates