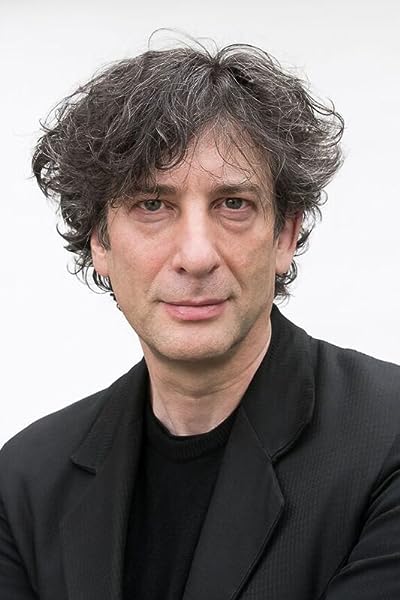 The Day I Swapped My Dad for Two Goldfish Paperback – Picture Book, September 26, 2006

"Grumpy Groundhog" by Maureen Wright
It’s Groundhog Day, and everyone is gathered to find out if it’s time for spring. But Groundhog does NOT want to leave his cozy bed in his cozy den. | Learn more
click to open popover

“A bittersweet, guffaw-out-loud story from the most distinctive partnership in picture books today.” (The Guardian (UK))

“McKean is in peak form here, with dark, spiky graphics that somehow manage to convey both sweetness and menace.” (Washington Post)

“Leave it to Neil Gaiman to write a zany tale that’s swimmingly good.” (The Washington Missourian)

Neil Gaiman is a #1 New York Times bestselling author of books for children and adults whose award-winning titles include Norse Mythology, American Gods, The Graveyard Book, Good Omens (with Terry Pratchett), Coraline, and The Sandman graphic novels. Neil Gaiman is a Goodwill Ambassador for UNHCR and Professor in the Arts at Bard College.

Dave McKean is best known for his work on Neil Gaiman's Sandman series of graphic novels and for his CD covers for musicians from Tori Amos to Alice Cooper. He also illustrated Neil Gaiman's picture books The Day I Swapped My Dad for Two Goldfish, The Wolves in the Walls, and Crazy Hair. He is a cult figure in the comic book world, and is also a photographer.

4.7 out of 5 stars
4.7 out of 5
227 global ratings
How are ratings calculated?
To calculate the overall star rating and percentage breakdown by star, we don’t use a simple average. Instead, our system considers things like how recent a review is and if the reviewer bought the item on Amazon. It also analyzes reviews to verify trustworthiness.
Top reviews

jennifer72Top Contributor: Pets
5.0 out of 5 stars Such a fun read
Reviewed in the United States on October 19, 2018
Verified Purchase
My 8 year old has loved this book for a couple of years. I purchased the hard copy to ensure he can read it over & over on its own before he no longer enjoys doing so. This is definitely just a fun read as he reads at a 5th grade level, but nothing beats Neil Gaiman having a boy’s dad traded around town for fish & toys.
Read more
2 people found this helpful
Helpful
Report abuse

Mare
5.0 out of 5 stars Brilliant. Just brilliant.
Reviewed in the United States on June 21, 2019
Verified Purchase
We read this at bedtime most nights, and I do not tire of it. Love.
Read more
One person found this helpful
Helpful
Report abuse

Aaron Lee
5.0 out of 5 stars Great for all ages
Reviewed in the United States on April 13, 2009
Verified Purchase
This was a wonderful book. Not only did my three year old daughter love it but I did as well. Just the thought of trading your dad for something else and him getting traded down the line was brilliant. The art is not for everyone. A few people i showed the book to thought it was too "out there". I loved the art. Neil Gaiman and Dave Mckean make a wonderful duo in this book. This is one of those books that I will never have a problem reading to my children over and over again.
Read more
3 people found this helpful
Helpful
Report abuse

Toni House
3.0 out of 5 stars Cute and funny
Reviewed in the United States on August 2, 2016
Verified Purchase
Cute and funny. The kid really did swap the dad for two Goldfish.
Read more
2 people found this helpful
Helpful
Report abuse

B. K.
5.0 out of 5 stars Trade your Dad?! But you have to get him back!
Reviewed in the United States on August 7, 2015
Verified Purchase
My 6-year-old granddaughter loved this book! The illustrations are great. How you go about trading your Dad - I don't know. But it works in this fun story.
Read more
One person found this helpful
Helpful
Report abuse

Dan Looney
5.0 out of 5 stars Post modern
Reviewed in the United States on September 7, 2019
Verified Purchase
Post Modern isn’t my happy place but it’s Neil so we do what we do
Read more
Helpful
Report abuse

Suad
5.0 out of 5 stars So much fun!
Reviewed in the United Kingdom on October 31, 2017
Verified Purchase
I LOVED this book. What a hoot! It was so amusing, so entertaining and so very clever!

The premise was so simple, yet so unlike anything else I've read for children. Neil Gaiman has the uncanny gift of being able to delve into the brains of any age group and write for them. In this case, it was the brain of a child, who was sick of seeing his dad just sitting around reading the newspaper. A child who was jealous of his friend's goldfish and wanted them so badly, he was willing to trade for them. In steps the useless, newspaper-reading, dad. The friend asks for the dad, the boy agrees. So the dad goes, and the kid gets his goldfish.

What he isn't aware of is that his dad was being traded around the entire neighborhood because he was so boring. So his friend traded his dad in the next door kid's guitar, and so on and so forth.

So much fun!
Read more
One person found this helpful
Report abuse

Florence
5.0 out of 5 stars This is just so funny. I love it
Reviewed in the United Kingdom on August 13, 2017
Verified Purchase
This is just so funny. I love it, the kids love it. 4+ One of those books that an adult enjoys reading aloud because it is so witty. We got it from the library but then bought a copy because we had to have it. I also love (by the same author) Crazy Hair 4+years and The Wolves in the Walls: 7+ years for the latter as it could scare little ones - creepy wolves emerging from inside the walls of the house, though they are vanquished in the end.
Read more
Report abuse

Drahma
5.0 out of 5 stars Poignant
Reviewed in the United Kingdom on May 3, 2019
Verified Purchase
A clever little read - kids loved it
Read more
Report abuse

Page 1 of 1 Start overPage 1 of 1
Previous page
Next page
Pages with related products. See and discover other items: goldfish books for children, earth day, books for dads, book for dad on father's day, children books for fathers day, day in the life books