Daybreak and millions of other books are available for Amazon Kindle. Learn more
Share <Embed> 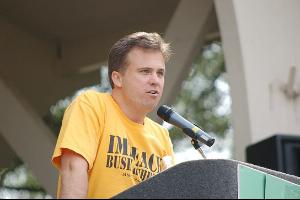 by David Swanson (Author)
4.6 out of 5 stars 29 ratings
See all formats and editions
Sorry, there was a problem loading this page. Try again.
Read more Read less
Previous page
Next page

“[Daybreak is] a useful guide to restore the balance of powers and reclaim our constitutional system of government.” —Marjorie Cohn, president of the National Lawyers Guild

“Daybreak urgently reminds us that good political intentions are not sufficient to ensure the continuation of our democracy; informed vigilance is vital to that task.” —Mark Karlin, BuzzFlash

“David Swanson's Daybreak impressively exposes all the ways our government has changed for the worse under the Bush administration, and makes clear that we need to do far more than elect a new president to see our tattered Democracy restored.” —Vincent Bugliosi

DAVID SWANSON is cofounder of AfterDowningStreet.org, creator of ConvictBushCheney.org, the Washington director of Democrats.com, and a board member of Progressive Democrats for America. He served as press secretary for Dennis Kucinich's 2004 presidential campaign and has been a leading voice for the prosecution of Bush and Cheney for war crimes.
Start reading Daybreak on your Kindle in under a minute.

Bibliophiledw
5.0 out of 5 stars Best on the Subject!
Reviewed in the United States on August 12, 2015
Verified Purchase
One of the best books I've read about our REAL Government! It ain't in the school books! It ain't in the newspapers, TV, or radio. Stunning information with factual and declassified information. It's all there IF one knows How to Look and Where. One of the best features of this book is the way in which this book is written. David Swanson, Press Secretary to former Congressman Dennis Kucinich (my Hero) has written it in such a way as to read easily and rather quickly like a novel and, given the material being presented, that's an amazing writing style! He has also categorized information and presented it in a cohesive way. Even BETTER, I LOVE that he has actually given Solutions for, We, the People, and what needs to change to get the governance of our Country back. Awesome. Anyone can criticize, but David Swanson gives Solutions and Needed Changes. Bravo! Perhaps he should throw his hat in the ring for 2016. He's made it very clear: what's wrong and how to fix it and .....brought forth some very gutsy proposals I've not heard anyone else voice.
Read more
Helpful
Report abuse

Andrew Kreig
5.0 out of 5 stars Kudos for Swanson and "Daybreak"
Reviewed in the United States on January 25, 2010
Verified Purchase
As of this writing in early 2010, several recent developments underscore why "Daybreak" deserves the overwhelmingly favorable responses it's been receiving from early reviewers. The author presciently and boldly captured the political, moral and constitutional catastrophies we're facing in such areas as acceptance of warrantless surveillance, torture and (via an activist Supreme Court) the novel concept that corporations (foreign controlled and otherwise) should have vast new powers to influence U.S. elections.

I saw David Swanson in action last July when we each attended a political gathering where House Judiciary Chairman John Conyers opined that his friend President Obama was heading toward a political disaster on health care. "There is no one more disappointed than I am in Barack Obama," Conyers told the Progressive Democrats of America, which he and David co-founded. "I've told him that to his face," Conyers continued in recalling his conversation with the president. The reason? "Buddy, you are wrong on health care, and it's going to cost you big time," Conyers continued. "We've got to tell Obama now, or he'll be a one-term president."

David reported the remarks thoroughly that evening on his blogs, the only one to do so. Later, I met at least one Conyers aide who felt that reporting such controvesial remarks in a small group setting among political allies wasn't appropriate, particularly if it might create tensions among Democrats. But that's David Swanson: Tireless, prolific, friendly but tough-minded with a dedication to helping the public make decisions based on the best information available, even if there's fallout some dislike.

That perspective pervades his book, whereby his seeks to address the decision-making gridlock of our political system from a constitutional perspective, albeit without the many years on a faculty, court or elective office typical of one suggesting major changes. One of the few previous reviewers here to provide less than four stars to this book seemed to react negatively to the author's temerity in suggesting solutions without such experiences. My reaction is to judge the material on the quality of thought matched with societal need, not the author's ascent through institutions that inevitably acquire gatekeeper characteristics in a mature society.

Rebels, after all, founded the U.S. and wrote its original constitutions. And momentum to create a new nation was influenced by "Common Sense," reputed to have sold 120,000 copies in just three months after its publication in 1776 by Tom Paine, another author whose message fit the times.

Bill Hughes
5.0 out of 5 stars David Swanson's "Daybreak" is a Wake-Up Call for Patriots
Reviewed in the United States on September 4, 2009
Verified Purchase
For me, the essence of author/activist David Swanson's insightful tome: "Daybreak," is this: On June 16, 2005, I was at the U.S. Capitol, in Washington, D.C., to cover a hearing on the infamous "Downing Street Memos." This document, crafted by the Brits, revealed that the Bush-Cheney Gang, colluded with Dubya's poodle, Tony Blair, the then British P.M. It showed that they were predisposed to go to war with Iraq--no matter what. To that immoral end, the scoundrels schemed to fix the "intelligence and facts...around the policy." In other words, the b......s lied and thousands of innocents died, U.S. troops and Iraq civilians alike; and the U.S. taxpayers are now out $3.5 trillion and counting.

That hearing, initiated by Swanson, along with a coalition of activists, was held in a basement room of the Capitol--more like a large closet. The phonies in the Establishment media either totally ignored, marginalized or mocked it. This, sadly, was their M.O. during most of the reign of the Bush-Cheney Gang.

Swanson details how Dubya enlarged the powers of presidency way beyond the original intent of "The Founders." He rightly labels it a "power grab." With respect to the battle for Impeachment, Swanson spotlights the laudable efforts of House member, Dennis J. Kucinich (D-OH).

Moving on, it will just break your heart to read how the Congress could have ended the blood bath in Iraq. As Swanson underscores--and this was in 2007 when the Democrats held a majority in the House--all they had to do was simply to "stop passing bills to fund it."

Finally, Swanson writes with urgency. Let his call for the full utilization of "Citizen Power," echo throughout the land. The people need to take their country back before it is too late. Wake-up, America!
Read more
4 people found this helpful
Helpful
Report abuse
See all reviews
Back to top
Get to Know Us
Make Money with Us
Amazon Payment Products
Let Us Help You
EnglishChoose a language for shopping. United StatesChoose a country/region for shopping.
© 1996-2021, Amazon.com, Inc. or its affiliates