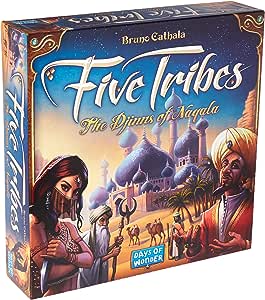 Brand: Days of Wonder
4.8 out of 5 stars 576 ratings
| 10 answered questions
Amazon's Choice recommends highly rated and well-priced products.
Amazon's Choice for "five tribes"
Available at a lower price from other sellers that may not offer free Prime shipping.

Crossing into the Land of 1001 Nights, your caravan arrives at the fabled Sultanate of Naqala. The old sultan just died and control of Naqala is up for grabs! The oracles foretold of strangers who would maneuver the Five Tribes to gain influence over the legendary city-state. Will you fulfill the prophecy?  Invoke the old Djinns, move the Tribes into position at the right time and the Sultanate may become yours!  Designed by Bruno Cathala, Five Tribes is a bit more of a "Gamers' Game" than Days of Wonder's standard fare.  The game builds on a long tradition of German games with wooden Maples in a unique twist on the Worker Placement game genre. While the rules are quite easy to learn and understand, implementing a winning strategy will take a calculated approach.  In this worker displacement game, you score by carefully maneuvering the Five Tribes of Maples over the tiles that make up the ancient city-state of the Sultanate of Naqala. You need to look ahead to determine what moves will not only position you to score well, but put your opponents at a disadvantage. It's when, how and where you dis-place the Five Tribes of Assassins, Elders, Builders, Merchants & Viziers that will determine your victory or failure!  Included are: 30 Game Tiles depicting the Sultanate of Naqala; a bag of 90 wooden Maples with Yellow Viziers, Red Assassins, Green Merchants, Blue Builders and White Elders; Palm Trees, Palaces and Camels; 22 Jinn cards; 54 Resource cards, plus 5 Djinns, Victory Coins, Scoring Pad Summary sheets and Rules Booklet.

4.8 out of 5 stars
4.8 out of 5
576 global ratings
How are ratings calculated?
To calculate the overall star rating and percentage breakdown by star, we don’t use a simple average. Instead, our system considers things like how recent a review is and if the reviewer bought the item on Amazon. It also analyzes reviews to verify trustworthiness.

YaroslavTop Contributor: Pets
5.0 out of 5 stars This is not a quick party game but a family tradition in the making!
Reviewed in the United States on August 14, 2017
Verified Purchase
Please remeber when you are choosing this game that it is not a quick get together with friends to kill an hour or so... This is a game you play with your family or someone who is staying for a long weekend! And, once you add an Artisans Expansion Set, it gets even longer. BUT, we would not have it any other way. Once, we added Artisans to our game playing, we could no longer play without them!

One particular strong point of this game is the ability for just two people to play! And, not just play like some other games claim but still have lots of fun doing so without diminishing the complexity of the game. In this case, each person gets two turns to bet and two turns to move. This in itself introduces a whole new way to plan, setup and execute your moves!

Since February, we played around 19 games thats almost three games a month with an average playing time of about 4 hours per game, some were a bit shorter but most were just about 4 or even longer... For some reason in my mind, this game relates to a complex version of chess. Every move you make with meeples is a trade off between available moves. The resulted meeple, tile, Djinn and magic item actions give you points. You win by accumulating the most total points. The beauty of this game is that there are many ways to win, by collecting: gold, resources, properties, Djinns, precious items, certain color meeples (yellow, purple and white) and certain property improvements. Lots of ways to win and lots of ways to play. The game is completely customizable from the board to resources to Djinns to meeples to (as an added chance bonus) magic/precious items. There is no single game setup that you will play that will be the same!

So, to sum it up, if you are looking for a party game, this is not the game you want but if you have time for a fun family adventure (even just two people), then you are in the right place! If you do buy this game, as with some other Days of Wonder games, remember not to throw away card board cutouts but use them under the plastic tray to keep game pieces from spilling into adjacent compartments (see pictures).

SadieLove
5.0 out of 5 stars Exceptionally well-balanced and fun
Reviewed in the United States on September 12, 2018
Verified Purchase
This is a TERRIFIC game. The components are great, the art is great and the game play is simple, smooth and exceptionally well crafted for balanced and engaging game play. Although the board may look intimidating because of all the pieces (the reason I initially ignored the game) the rules are really simple and quick to pick up. Everyone understands them after the first couple turns (not their first couple turns but for the whole group). But the strategy can be as complex as you want (there’s a lot to think about if you’re inclined to). Feels a lot like 7 Wonders but with more WAY more interaction. You should get it. If you like Scythe, Catan, 7 Wonders, Ticket to Ride ect then you’ll definitely (98% sure) like this. The only con is if not everyone wants to play at the same pace there can be some “analysis paralysis”, where one player takes forevvvveeeer to take their turn. But heckling usually solves that issue and it’s still usually not super frequent of an issue, but if that’s something that your group is prone to or the irks you, buyer beware.
Read more
9 people found this helpful
Helpful
Report abuse

Astral_Complex
5.0 out of 5 stars Mancala on steroids. Amazing game. Just hoping that I don't lose any of the meeples in it. There are a lot of meeples.
Reviewed in the United States on April 18, 2018
Verified Purchase
What can I say about this game. It hits every note that I like, Meeples, ever changing board, lots of strategy, and just fun. Basic game play is this. You take all the meeples from a tile and drop them off one by one on tiles to the destination you want. You must make sure that the last meeple that would be placed has a meeple of the same color on the tile. Instead of placing the last meeple you collect all meeples of the same color from that tile (including the one you would have placed) and then perform the actions from the tile and the meeple color. Very fun game. There is only one downside to this game that I can think of. The game can induce analysis paralysis if you are an over-thinker.
Read more
6 people found this helpful
Helpful
Report abuse

Five Tribes is an incredibly tight, tactical game. Every turn, you will be scoping out the game board for the best possible turn, and then bidding on the turn order (which brings in some nice bluffing and planning -- it's possible to entirely overbid as happened to one player in the latest game we played). Because of this, it can be prone to AP, but this doesn't happen often if you keep players moving.

I love Five Tribes because it presents so many difficult decisions as well as so many paths to victory. I sprinted to a tight win in our latest game because I specialized on the market almost to the exclusion of everything else. I've seen other players win with Djinns, with conservative bidding, and with great area control on the board. The great part is, you need to focus on multiple victory point engines in addition to your primary one, because one specialty won't be enough to bring you to victory.

If you love tactical games, beautiful artwork, and a great, elegant game that plays in under an hour and a half, Five Tribes is for you. I couldn't think of another game that better uses worker placement in such an innovative fashion, and it's one of my go-tos when we want a medium-heavy game to play. Highly, highly recommended.
Read more
2 people found this helpful
Helpful
Report abuse
See all reviews

Abi Catlender
5.0 out of 5 stars Excellent family game once you've got your head around the rules
Reviewed in the United Kingdom on April 22, 2016
Verified Purchase
This is an excellent game for 3 or more players but you can also play with two. The rules take a little bit of getting used to but once you've sussed it you're sure to be going back for more. I am getting quite competitive with this one.

The game dynamics are varied and anything can happen - you don't know who has won until the end of the game when everyone counts their money.

You have to decide whether to spend any of your money on choosing to go first, what squares to land on, and what impact your move will have on other players. It's really entertaining and each game is different and the meeples are placed on different squares, and the squares are in different places. Different cards for different skills come up and it's a case of doing a mixture of things to maximise your money on each turn.

Manos Agianniotakis
5.0 out of 5 stars One of Bruno's best
Reviewed in the United Kingdom on April 27, 2018
Verified Purchase
This is one of the best Bruno Cathala games out there (and, let's face it, he is a very good designer). A very deep strategic game with a reasonably simple rule-set. The game scales really well in all player counts. Anyone with an interest in modern board games should play five tribes at least once. Oh and the component quality and the game insert are off the charts (once again, well done days of wonder). Just be prepared, 4-player games can go on for up to 3 hours.
Read more
One person found this helpful
Report abuse

walduus
5.0 out of 5 stars Great board game
Reviewed in the United Kingdom on September 1, 2016
Verified Purchase
‘Land of 1001 Nights’ theme game. Previous sultan has died and the control over the state is up for grab. Are you the worthy candidate?
It is relatively simple board game for 2-4 players. It is well-balanced game with good player interactions and great quality of components.
I really enjoyed every time I played it!
Read more
Report abuse