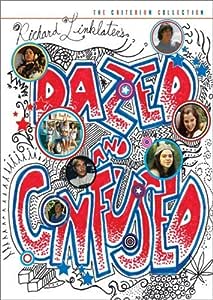 Rites of passage like hazing mark the last day of school before 1976 summer break for Texas teens.

You remember high school? Really remember? If you think you do, watch this film: it'll all really come racing back. After changing the world with the generation-defining Slacker, director Richard Linklater turned his free-range vérité sensibility on the 1970s. As before, his all-seeing camera meanders across a landscape studded with goofy pop culture references and poignant glimpses of human nature. Only this time around, he's spreading a thick layer of nostalgia over the lens (and across the soundtrack). It's as if Fast Times at Ridgemont High was directed by Jean-Luc Godard. The story deals with a group of friends on the last day of high school, 1976. Good-natured football star Randall "Pink" Floyd navigates effortlessly between the warring worlds of jocks, stoners, wannabes, and rockers with girlfriend and new-freshman buddy in tow. Surprisingly, it's not a coming-of-age movie, but a film that dares ask the eternal, overwhelming, adolescent question, "What happens next?" It's a little too honest to be a light comedy (representative quote: "If I ever say these were the best years of my life, remind me to kill myself."). But it's also way too much fun (remember souped-up Corvettes and bicentennial madness?) to be just another existential-essay-on-celluloid. --Grant Balfour

On the DVD
With a perfect combination of awesome '70s-era packaging and a totally rockin' selection of bonus features, the Criterion Collection's director-approved special edition two-disc release of Dazed and Confused instantly qualifies as one of the very best DVDs of 2006--the 30th anniversary of the Bicentennial, man! That's what I'm talkin' about! As a sublime companion piece to Criterion's release of Richard Linklater's previous film Slacker, the set comes in a slipcase (complete with "Physical Graffiti"-like picture-windows) festooned with Flair-pen high-school "doodling" (just like you'd scribble on your Pee Chee folders, back in the day), and the features get off on a high note (kinda like Slater, y'know?) with writer-director Linklater's feature-length commentary, which offers all aspiring filmmakers an important lesson protecting your vision and knowing when not to compromise. In recalling the many struggles he endured during production, Linklater covers a lot of territory (notes from the studio, the fantasy abundance of muscle cars, selection of music, and his acute disappointment when Robert Plant--but not Jimmy Page--refused to allow Led Zeppelin songs to be used in the film), and his engaging, good-humored perspective (and appropriate sense of vindication) clearly arises from his film's eventual acceptance as a classic. (For all you film buffs out there, Linklater quite rightly recommends Tim Hunter's Over the Edge and Lindsay Anderson's If... as "great teenage films" that defined the genre before Dazed.) The film itself never looked or sounded better (Linklater and cinematographer Lee Daniel supervised the high-def digital transfer), and a generous selection of deleted scenes will be welcomed by the film's legion of loyal fans.

The Disc 2 supplements are highlighted by Making "Dazed", filmmaker Kahane Corn's decade-in-the-making 50-minute documentary, chronicling all aspects of the production from casting to the Dazed tenth-anniversary celebration in Austin, Texas, in 2003. "Beer Bust at the Moon Tower" allows random viewing of a 118-minute compilation of behind-the-scenes footage, on-set interviews (with cast members both in and out of character), audition footage, and recollections from the anniversary bash. The accompanying 72-page booklet is a Criterion master-stroke: Designed like a small-scale high-school yearbook, it's filled with more "doodling" artwork, lots of photos, three appreciative mini-essays (the best being by journalist/author Chuck Klosterman), recollections by cast and crew, and humorous "Profiles in Confusion" portraits of the characters in Dazed, reprinted from the film's similarly designed companion book. It's all topped off by a miniature reproduction of the film's original poster, designed by Frank Kozik. In terms of capturing "The Spirit of '76" and the film's celebratory sense of anti-nostalgia, this is surely one of Criterion's finest releases to date. --Jeff Shannon

4.9 out of 5 stars
4.9 out of 5
245 global ratings
How are ratings calculated?
To calculate the overall star rating and percentage breakdown by star, we don’t use a simple average. Instead, our system considers things like how recent a review is and if the reviewer bought the item on Amazon. It also analyzes reviews to verify trustworthiness.

John Lindsey
5.0 out of 5 stars Dazed and Confused differences
Reviewed in the United States on August 10, 2011
Verified Purchase
Criterion

Deleted Scenes (SD; 14:27) offers a few bridging scenes, including some dealing with the infamous "pledge" the Coach wants everyone to sign. The video quality of these scenes is pretty spotty at times.
The Blunt Truth (SD; 4:21) is a parody of the old Educational Films documentaries many of us were forced to watch growing up in school, this one of course about the horrors of marijuana use.
Retro Public Service Announcements (SD; 2:03) are two PSA's which play like parodies but are actual vintage pieces, one about venereal disease (replete with bouncy theme song, and no I'm not kidding) and the other the famous littering ad featuring the crying Native American.
U Control has only one fairly lame toggle switch giving information on the tunes that fill the soundtrack.

I am getting the Criterion due to better extra features than the Universal extra features, I hope it will help deciding on your purchase!

Stewie Waldren
5.0 out of 5 stars Alright, alright, alright.
Reviewed in the United States on May 8, 2016
Verified Purchase
So I picked this version up because I have the bare bones one disk version with a few deleted scenes, retro PSA's, a propaganda thing, and sponsorship by Vans for some odd reason. I saw the DVD of the Criterion Collection after I picked that copy up and I was like I'll get it another time. Felt like the time was now since this is my #3 favorite film of all time. And I saw a few of the bonus features and loved that there were more deleted scenes and loved the documentary. Haven't seen the rest but I'll check it out later. All in all, great find
Read more
6 people found this helpful
Helpful
Comment Report abuse

daBilbo
5.0 out of 5 stars If only for the music, a funny movie!
Reviewed in the United States on June 3, 2017
Verified Purchase
Besides the extras in depth on the making of this movie, you get to hear all the dialogue (meaning the 'R' stuff language purged from other editions). A great movie set in the late '70s with an excellent music score! Just sit back, relax and enjoy! Many budding stars are involved.
Read more
2 people found this helpful
Helpful
Comment Report abuse

the masked reviewer
5.0 out of 5 stars A Modern Classic that captures an era as perfectly as looking through an old photo album.
Reviewed in the United States on May 9, 2008
Verified Purchase
Richard Linklater's first picture, SLACKER, made on a shoestring, earned him a lot of attention, and he somehow managed to persuade Universal Pictures to spend $6 million on his sophomore effort, DAZED & CONFUSED, which follows a group of two dozen suburban Texas kids on the last day of high school in 1976. The studio that financed AMERICAN GRAFFITI several years before may have been hoping that lightning would strike again, and indeed there are intriguing similarities between the two movies. Both of them are ensemble pieces introducing a slew of talented young actors; both observe the cruising and dating rituals of a diverse gang of kids on a single afternoon and night; both feature wall-to-wall scores of golden oldies.

But the differences between the two movies are striking as well. AMERICAN GRAFFITI, set in 1962, was a chronicle of the last days of innocence. In DAZED & CONFUSED, innocence is already long gone. These kids, some of them as young as 14 or 15, booze it up, smoke dope, search for sex, and speak in a rush of profanities that might make the characters in a Scorsese movie blush, Unlike the idealistic kids in GRAFFITI, these teenage slackers are aimless and nihilistic. The film is more honest than George Lucas's reminiscence in acknowledging the tensions among the different cliques of high school kids, and it's psychologically perceptive about their conflicting impulses toward conformity and defiance. Linklater's alter ego, the incoming freshman Mitch (Wiley Wiggins), is flattered by the attention he gets from the older jocks even while he despises their infantile high jinks.

The performances are persuasive down to the smallest part, and Linklater has a fine ear for the unexpectedly loopy turns of phrase that make these teenagers come to life. He renders all of them -- the drugged out space cadet, the vascillating quarterback, the goons who take an almost psychotic relish in paddling freshman, the nerdy intellectual and the budding feminist -- with wit and affection. To anyone from the AMERICAN GRAFFITI generation, the teenagers in DAZED & CONFUSED may seem as alien as a band of Martians, but Linklater's passionate concern for the clan he's conjured should keep everyone mesmerized.
Read more
9 people found this helpful
Helpful
Comment Report abuse
See all reviews

Daniel
5.0 out of 5 stars Five Stars
Reviewed in the United Kingdom on December 23, 2017
Verified Purchase
Excellent Service. Very Quick. The product itself is amazing. Well worth it.
Read more
Report abuse

FlicksByVic
5.0 out of 5 stars The disc arrived looking like new.
Reviewed in Canada on August 10, 2020
Verified Purchase
This is one of the best movies ever made and this edition has lots of extra highlights for fans. It is definitely worth watching the extras and the auditions of all the lead characters! The packaging looked like new on arrival and there wasn't a single scratch or any other damage on the disc.
Read more
Report abuse