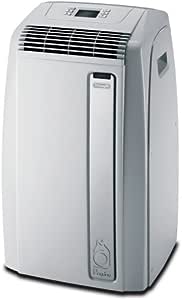 Visit the De'Longhi Store
2.6 out of 5 stars 111 ratings
Currently unavailable.
We don't know when or if this item will be back in stock.

Designed for quickly cooling any room in the house, this thoughtfully designed portable air conditioner uses R410a refrigerant gas to help protect the environment and the ozone layer. Its refrigerant also provides energy-efficient operation, using less energy to deliver the same amount of cooling as other refrigerant types. The air conditioner produces 12,000 BTUs of cooling power and offers four different fan speeds depending upon the level of cooling desired. It also supplies an electronic control panel with an easy-to-read LCD display, a fully featured remote control, and a 24-hour programmable timer that turns the unit on at a specific time--great for coming home to a cool room at the end of the day.

In addition to cooling the air, the unit also functions as a dehumidifier with a "dripless" system, which means no annoying bucket to empty. Other highlights include Sleep and Smart modes, built-in air filtration, an energy-efficient adjustable thermostat, and quiet performance thanks to the high-efficiency compressor and components, as well as durable caster wheels and side handles for portability. Accessories include a window bracket and an exhaust hose for easy installation. The unit effectively combines an air cooler, a dehumidifier, and an air cleaner all in one stylish design that will nicely complement any decor. Designed and engineered in Italy, the air conditioner measures approximately 15 by 18-1/4 by 30-1/2 inches and carries a one-year limited warranty.

Save Energy While Cooling Down

How Do Portable Air Conditioners Work?

2.6 out of 5 stars
2.6 out of 5
111 global ratings
How are ratings calculated?
To calculate the overall star rating and percentage breakdown by star, we don’t use a simple average. Instead, our system considers things like how recent a review is and if the reviewer bought the item on Amazon. It also analyzes reviews to verify trustworthiness.

Fred L. Curry
4.0 out of 5 stars Check it out
Reviewed in the United States on July 5, 2017
Verified Purchase
It gets a little loud when the air conditioning is working, but it worked perfectly out of the box well and cools our bedroom easily. Has a remote control. The exhaust tube is just barely long enough to reach the vent when I put the chassis on an 8 inch support (4x4 foot window that slides open, so the vent is about 2' above the sill). Regular double hung would be no problem.
Read more
2 people found this helpful
Helpful
Comment Report abuse

Kevin
3.0 out of 5 stars Sold as 'new' but shipped a used AC
Reviewed in the United States on July 10, 2012
Verified Purchase
3 stars, Amazon loses 2 stars for selling me a used AC and telling me it was new.

I purchased this AC here at Amazon, it was supposed to be a new unit but when I got it I discovered that it had previously been used. So this review is less about the AC and more about the transaction itself.

The cardboard accessory compartment inside the package had been ripped open, the window scoop attachment was scuffed and clearly used and the side panel was broken at it's attachment point and there was a section of the window attachment missing completely.

As for the AC unit itself, I ran it for the weekend to see if it was enough to cool the room that I need cooled and it did well enough. The temp on Saturday was 100 and on Sunday it was 101, with the AC running it kept the room, which is difficult to cool, in the mid 70's.

One thing I didn't like about it, other than being previously used, was that the display doesn't show you what the room temperature is. It only shows you what the AC is set for. Also, as far as I could tell, there was no way to turn the display off when the AC was off.

Trey Kubena
1.0 out of 5 stars Shame on me, it leaked 1st day just like everyone said it would
Reviewed in the United States on July 10, 2010
Verified Purchase
I cant believe I didnt heed warning from the reviews. I guess I couldnt believe that it would really leak so much. Well it is not drip free, and yes it DOES leak big time. It was not from a dirty clogged port hole as this happened within the first 24 hours of use.

Product showed up with the bottom ripped open and part hanging out. The fedex guy showed me how the packaging material we very poor in support etc. (all cardboard no wood for support). I examined the unit and with the exception of a busted wheel it seemed fine.

The leaking problem seems to be a reoccurring theme with this product. I should have paid more attention to the review. It does cool though I'll give it that, just wish it didn't leak all over my floor!!! Bad design period!!!
Read more
17 people found this helpful
Helpful
Comment Report abuse

Gloria Drees
5.0 out of 5 stars Five Stars
Reviewed in the United States on August 17, 2016
Verified Purchase
Perfect replacement for one we had for several years.
Read more
4 people found this helpful
Helpful
Comment Report abuse

Duane A. Priest
VINE VOICE
5.0 out of 5 stars An EXCELLENT Product... no problems here!
Reviewed in the United States on July 7, 2012
Verified Purchase
I've seen so many poor reviews for this product that I had to step up and add my opinion. I have two of the PAC A120E units... I bought the first one at the beginning of the 2011 cooling season and used it throughout a record-breaking summer with no problems whatsoever. Early this season I bought another, and it too has performed flawlessly. I also have a 10,000 BTU version that I purchased during the 2010 cooling season and it has performed perfectly. I can see how this or any similar unit could let water escape into the room if it's not kept clean, but I run these 24 hours a day during the hottest part of the season, and I do keep the units clean and I've not had any problems whatsoever.

The Central AC in my 2500 sq ft condominium was not optimized for the extreme temperatures we've experienced in the last few seasons, so I use these units for supplemental cooling in the areas that need it the most. I do watch my power bills, and I was quite surprised to find that by using these units my average power consumption has DECREASED rather than going up as I expected. Living in a condo means that window units are not a possibility, so rather than spending several thousand dollars to upgrade my central system, this was the optimal solution.

If I had to pick something to complain about, I would have to point out that the window exhaust panel is nothing to write home about. Most of my windows are 48" wide, and the panel doesn't extend long enough to fit. In the smaller windows where I can use it the extendable design leaves a gap at the extension when the window is closed against it, which I resolved by using some adhesive weatherstripping. For my larger windows, I built a wooden insert to use instead of the panel and used the included through-the-wall hose adapter to vent the unit, which works great.

I can only speak to my experience, but I would not hesitate to recommend these to others looking for a portable solution. Several of my neighbors have also purchased these from Amazon based upon my recommendation, and all have had positive experiences like mine. This product works, and it works well and as promised. I have to admit it works even better than I expected! Given the price and compared to the other manufacturer's units I researched before picking the DeLonghi brand, I would definitely say that it's the best value for the money. If buyers have an experience equal to mine, they won't have any complaints at all.
Read more
9 people found this helpful
Helpful
Comment Report abuse

SN
1.0 out of 5 stars Delivered in poor condition.
Reviewed in the United States on July 26, 2010
Verified Purchase
My DeLonghi PAC A120E was delivered in poor condition. The box was damaged. It looked like the unit had been dropped then repackaged. When I unpacked the air conditioner one of the casters was pushed in. The unit is not level when placed on the floor. It is has clearly been damaged. I waited over 24 hours to run the unit as suggested by the instructions that were included with the unit. When I finally put the unit on it leaked water all over the floor after only a few hours of use. I am extremely unhappy with this purchase. I will be returning this air conditioner.
Read more
3 people found this helpful
Helpful
Comment Report abuse

KC ( New York, NY)
5.0 out of 5 stars Portable comfort
Reviewed in the United States on August 8, 2010
Verified Purchase
This was the first time that I've been able to afford an A/C & it's electrical cost. I spent a lot of time researching different websites, prices and A/C products. I finally decided on the Delonghi PAC with Amazon because the price was right and the no shipping & handling cost was exactly what I was looking for. I must say that the Delonghi is an exceptional air conditioner. I don't find it loud, it was bigger than I expected but that doesn't matter since you have to keep it near the window anyway. As for the cooling capabilities, it's fabulous! It cools my livingroom well when I need it to be in there , my bedroom (10'x 15')and if I leave my bedroom door open it also cools the small hallway & my daughter's bedroom across from me. I am very pleased with this product.
K.C.
Read more
6 people found this helpful
Helpful
Comment Report abuse
See all reviews
Pages with related products. See and discover other items: air conditioner no window, dehumidifiers air conditioner, btu air conditioner, fans air conditioner