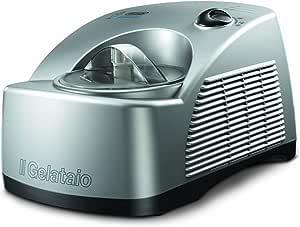 Visit the De'Longhi Store
4.0 out of 5 stars 233 ratings
Currently unavailable.
We don't know when or if this item will be back in stock.

Now you can enjoy homemade, Italian-style frozen desserts in less than 30 minutes with the amazing Gelato Maker. Unlike regular ice cream machines, the Gelato Maker has a built-in compressor, so you don’t have to pre-freeze the bowl. Just add milk, sugar and vanilla extract and turn it on. After 20 minutes, add chocolate, nuts, berries or your favorite candies and blend for 5 more minutes! Features 1.25-qt. capacity, dishwasher-safe paddle, bowl and lid, plus a colorful book of 50 recipes.

4.0 out of 5 stars
4 out of 5
233 global ratings
How are ratings calculated?
To calculate the overall star rating and percentage breakdown by star, we don’t use a simple average. Instead, our system considers things like how recent a review is and if the reviewer bought the item on Amazon. It also analyzes reviews to verify trustworthiness.
Top reviews

Denise J.
5.0 out of 5 stars CRAZY AMAZING! Worked flawlessly!!
Reviewed in the United States on May 30, 2015
Verified Purchase
I just received my DeLonghi Gelato Maker today!!! WOW unbelievable!!! In 14 min. I had the most decedent desert ever! Crazy amazing. Worked flawlessly, relatively quiet, efficient & very Easy to use. Highly recommended as this is the ONLY maker with a stainless steel mixing bowl. You do not even want to consider a maker with an aluminum mixing bowl as it WILL leach aluminum into your food. YUK!
Anyway I pre-made my recipe and had it waiting nice and cold in the fridge to pour into the machine as soon as it arrived. lol Placed a small amount of rum on the inner bowl so the 2 do not stick together. This is in the instructions. I turned the machine on thinking it would take a good 35 minutes and within 13 minutes it was done. Probably because MY recipe had very little watery fluids. The recipe book included called for more milk then I used.
I would like to share the recipe I created by pouring over multitudes of low carb (healthy brain diet) ice cream
recipes on the net. BTW Gelato is so much better then 50% air in ice cream. It is still ice cream just without all the fluff and Im not big on fluff and air.

Put all ingredients in a quart jar, shake and refrigerate till cool, pour into maker.

This machine is worth every penny. :)

S. Johnson
5.0 out of 5 stars Love this machine!
Reviewed in the United States on May 31, 2012
Verified Purchase
Ordered this in February, 2012. Some reviews concerned me but I followed the directions in the manual as well as some printed inserts about allowing the machine to remain upright and undisturbed at least one hour before using if the unit had to be moved before use. I believe the refrigerant sealed inside needs to settle properly in order for the unit to function. I also make sure the inner bowl is seated properly and prepare the surface below the bowl with vodka as per the instructions. In any event, I have been using this machine to make fabulous gelato ever since. I set my kitchen timer to 22 minutes and the gelato is typically done before then. The machine makes a quality gelato while incporporating as little air as possible into the product. I'm grateful the unit produces only 1.5l at a time. I would probably gain weight otherwise. Some of the recipes weren't translated to english properly in the included recipe book, so beware! I did purchase a book on making artisan gelatos and I've found those recipes to be a bit better. It also explains the science behind the gelato machine and how it differs from an ice cream machine.
Read more
9 people found this helpful
Helpful
Report abuse

CeeGee
1.0 out of 5 stars but this sounds like it could be a compressor problem which = $$$$
Reviewed in the United States on August 20, 2017
Verified Purchase
I bought this model 3 years ago and wish I had done a more through review search. The first 2 years there was no trouble. When I brought it out to make sorbet this summer (their recipes) the bottom of the metal bowl froze the sorbet so hard in the first 5 minutes that the paddle couldn't move. The top 2/3rds were still liquid. Each of 3 attempts produced the same effect which brought me to having to let the bowl warm up enough so that I could manually scrape the frozen sorbet off the bottom and into a container to place in the freezer. I'm no mechanic, but this sounds like it could be a compressor problem which = $$$$. Customer care put me on hold for minutes and returned with a "fix"...to coat the bottom of the bowl with 70% rubbing alcohol. Wtf? If anyone else has had this problem with this machine, PLEASE let me know what you had to do to correct this. Thanks.
Read more
3 people found this helpful
Helpful
Report abuse

hx1
4.0 out of 5 stars Very happy with the DeLonghi GM6000 ice cream/gelato maker!
Reviewed in the United States on December 26, 2011
Verified Purchase
As a careful shopper, I spent a LOT of time researching over the holidays for a good ice cream maker. I didn't want the hassle of the hand-cranked ice/salt units nor the ones that required pre-freezing the mixing bowl, so I concentrated my search on the self-refrigerating/freezing units. Based on reviews on various cooking and ice cream making web sites, as well as sites such as Amazon itself, I narrowed my top picks to three machines:

All three models are in the $200-$300 price range and received top marks from the various review sites. I am sure that one cannot go wrong buying any of these machines. For my personal choice however, I eliminated the Cuisinart machine pretty quickly off my list due to the potential design problems of the mixer motor arm assembly mentioned in the reviews. Several reviewers commented on the weak mixer motor and/or mixing arm assembly. The problems might or might not be real. But I just didn't want to risk it.

I looked long and hard at the Whynter/Lello machine. Seems like a really good choice. It makes a somewhat larger ice cream batch than the other two machines (2 qts. versus 1.5 quarts). I almost bought it. However, the non-removable mixing bowl was a deal breaker for me. I prefer to be able to remove the bowl and wash it in the sink when done making ice cream. I've had kitchen appliances in the past where this was an issue, and I can do a more thorough cleaning job when the bowl is removable to be cleaned outside of the machine.

That left me with my personal first choice: this DeLonghi model. The reviewers also complained about its mixing paddle tending to break easily. There were also comments about the small batch of ice cream that this machine makes. Finally, there were questions about whether this machine could make good airy ice cream due to its sealed lid design. But the mixing paddle is a really cheap replacement part (~$3 on the Internet). The smaller batches is not a really bad issue for self-freezing units such as this one, since I could just make batch after batch. Despite the airtight lid, some reviewers commented that this machine could still make good ice cream too. So I bought the DeLonghi.

We've made about six batches of ice cream so far on the DeLonghi, and it has worked out great. Every batch starting from the first was quite delicious, and this machine meets all of our needs for frozen desserts. The ice cream does tend to be denser and not so airy. But it is quite creamy and has a good texture like you would get from many premium ice cream brands in the store. Plus you can't beat the fresh and wholesome ingredients we use at home. Our family now prefer homemade ice cream over store-bought. Because the ice cream is so delicious, the smaller batch size is more obviously painful as they go quickly! On the other hand, we feel it's better to have less high-quality stuff than a lot of no-good stuff anyway.

The mixing paddle feels quite robust and turns out to be not a problem. Cleaning up was a piece of cake since the bowl, paddle, and lid are all removable and cleaned in the sink. We are careful not to leave the machine churning ice cream too long in case the mixture freezes over and break the paddle. We found the batches to be ready in under 20 minutes, as soon as the mixture firms up and starts to get pushed upward by the paddle. It then requires some additional time in the freezer to firm up some. If DeLonghi finds a way to make this machine to take in more air for a fluffier ice cream, I'll give it a full five stars.

Andy
5.0 out of 5 stars I love this ice maker
Reviewed in Canada on November 5, 2015
Verified Purchase
Oh boy!! I love this ice maker.
Excelent palete , flexible that avoid breakings when the ice cream is too hard.
Fast , less than 40 min the ice cream is ready.
Stainless still inside container what makes more healthy option as it does not contains aluminum that intoxicates your food.!!
I would highly revomend this machine, great quality, great results!!
Read more
Report abuse