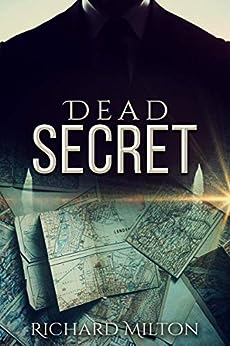 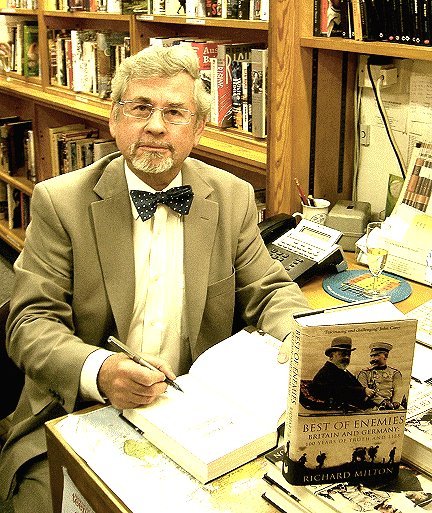 Richard Milton is a British writer, journalist and broadcaster. He currently freelances for The Daily Telegraph and other newspapers. He is the author of a dozen books - both fiction and non-fiction - all now available on Kindle as well as in book form. Read his blog and latest book news at - http: //bit.ly/1Bm0twR In fiction, he has published three mystery thrillers and a book of short stories. "Dead Secret" is a paranormal mystery thriller. Investigative journalist Tony Gabriel stumbles onto his biggest ever story when he inherits the papers of a long-dead historian - and finds himself the target of an ancient secret society. Are they just rich, powerful people playing an elaborate game, or have they truly gained paranormal powers to see into the future? "The Glass Harmonica" is a mystery thriller. Concert pianist Julia Franklin is heir to an inheritance worth a billion dollars - enough to bankrupt America's oldest bank when the trust matures. Miles Bartholemew, of Bartholemew Equity and Trust, has to find the heirs of the Franklin trust and deal with them permanently, before his family's bank is ruined. "Conjuring For Beginners" is a crime thriller. When legendary con-artist Ferdy Daniels dies alone and penniless, his daughter, Rosa, inherits his victims, who are convinced she was his partner in crime. To keep one jump ahead of them - and stay alive - Rosa must unravel Ferdy's web of deceits. But to re-trace her father's footsteps, she must learn to become as quick-witted and cunning as Ferdy, the master magician. "True Stories: Mysteries of Crime and Punishment" is a collection of short stories with a difference. Every story in the book is true - except one. Some tell of crimes that have gone unpunished by the law. Some are crimes against laws that are unwritten. And some are crimes that exist only in the mind. --This text refers to the paperback edition.

4.0 out of 5 stars
4 out of 5
48 global ratings
How are ratings calculated?
To calculate the overall star rating and percentage breakdown by star, we don’t use a simple average. Instead, our system considers things like how recent a review is and if the reviewer bought the item on Amazon. It also analyzes reviews to verify trustworthiness.
Top reviews

Caroline Greyling (Author of Five: Maor book one)
5.0 out of 5 stars Conspiracy theory
Reviewed in the United States on April 10, 2015
Verified Purchase
Tony Gabriel’s inheritance from his mother is bizarre to say the least. As an investigative journalist, he cannot pass up the opportunity to unravel the mystery. His research leads him to the Chadwick Foundation and the intriguing keeper of the foundation’s secrets, Eve Canning. She’s sexy as hell but harbors plenty of dangerous secrets. Tony finds himself drawn into her world of murder, addiction, prediction, sex and intrigue as he seeks to uncover one of the biggest conspiracies of all time. It’s possibly the story of the century - and it could kill him.

‘Dead Secret’ is a riveting, thrilling story that the author unravels thread by thread over each page, to reveal a frightening conspiracy. Each clue is expertly paced, and the writing style is very ‘James Bond’ like (which I love), with a raw twist. Many of the scenes are graphic, there’s a lot of history woven in and a bit of politics too. The relationships are not romantic or sentimental, they are primal. I found some of the ‘flashbacks’ or time changes a bit confusing, but this added to the overall mystery of the story. The subject matter is quite unique and interesting, as well as thought provoking. Any story that leaves me wondering and doing additional research is a winner in my books. This is a gripping novel that will keep the pages turning.
Read more
One person found this helpful
Helpful
Report abuse

Diana M. Hockley
5.0 out of 5 stars Unusual and intriguing paranormal mystery
Reviewed in the United States on March 19, 2015
Verified Purchase
Firstly, I have to say that the paranormal is not my genre and I was invited to review this book. I did so with some scepticism, but despite a slow start, I became fascinated by the plot which Richard Milton rolled out.

Tony Gabrieli, a hard-nosed journalist, receives a mysterious summons from a solicitor - this is a British book - upon the death of his mother. Unbeknownst to Tony, his mother was involved with a mysterious group called The Chadwick Foundation. Astonished to discover that she was far more than the suburban housewife she purported to be, he receives a file of papers and a box in which is something equally surprising. So, Tony is introduced to the science of physiognomy and the dangerous, deadly sexual ritual which could get him killed.

Using clever back story from the French Revolution and following on to the Second World War, Milton draws the reader into the paranormal underworld, where governments play with lives and highly connected men and women buy and sell unthinkable objects for priceless sums.
After Tony meets the fascinating Eve and is introduced into her circle, he – and the reader – finally begins to understand just what he is facing. The disgraced scientist, Cesar Casimir, leads Tony into a deadly maze where he is forced to use his hitherto unacknowledged precognitive skills to stay alive...and is Eve his lover or his killer?

The book starts energetically, but it took awhile for me to work out what was going on, perhaps because of the unfamiliar genre. At first reading it appeared that Tony Gabrieli was an ordinary journalist chasing a story, but as the story progressed, I became aware of a strong sense of foreboding. As I got to know the main character, I began to have grave concern for his safety – a mark of the talent of Richard Milton – and was soon swept into the by-plays and dangerous secrets with which the characters are engaged. All this was entwined with historical events which made it all the more interesting.

I would have liked to have known more about Gabrieli’s mother – how she became a trustee of the Chadwick Foundation – but this was only part I felt could have been explained further. I didn’t particularly like the character of Eve, though I suspect that she was supposed to have this effect on the reader - and the shenanigans which Tony and Eve got up to together - don't try this at home!

Thoroughly enjoyed this well written and intricate story and thought the ending was the only way it could have happened. No spoilers here!

DEAD SECRET is an exciting and intriguing thriller coalescing science, history, psychology, and the very nature of the human spirit. At its core is a fated encounter in the latter 18th century, an encounter which will bring into covert prominence a mysterious and enigmatic theory termed "physiognomy"-- not as the term is used to express the human body. In this context it is both a way of identifying ethnicities and physical "humors," and a method to scry the future. More than 200 years after, London investigative journalist Tony Gabriel, discovers secrets his late mother kept throughout her adult life, and finds a key player to his own outcome in Eve  Channing, curator of the Chadwick Museum and closet sadist.

Following the convolutions of this novel requires as close a focus as chasing a coiling anaconda along the jungle floor, but is far more exciting and entertaining.

I reviewed a digital ARC generously provided by the author for review purposes, no remuneration was exchanged.
Read more
4 people found this helpful
Helpful
Report abuse
See all reviews

Sglodion
4.0 out of 5 stars Now that was good.
Reviewed in the United Kingdom on April 21, 2015
Verified Purchase
They hallmark of a good author is to entertain the reader enough to encourage further reading. This author has achieved that for me. Most books I read these days are indie ebooks, a lot of which are hard going at best (my own included I presume), and I approached this novel with a weary resignation. What a delight to be proved wrong. In fact I am slightly perplexed as to why this hasn't been picked up by a publisher, but that's their loss.
Dead Secret is very professional effort, well researched, well characterised and well-paced (and in places scary and bizarre) and with an original subject matter, physiognomy, (I had to google it - it's real) . Often when I read a book I wonder how much of the author's own characteristics are imbued in the protagonist, but that is what makes a well-written book well-written - convincing characters. The novel is set in various time zones, 18th century, 1940s and the modern era as we trace the protagonist's ancestors.
"I know where this is going," I though as I reached the climax (ahem) but I was glad I was wrong-footed. Is this to be continued, I wonder. I hope so.
Read more
Report abuse

CGandCG
5.0 out of 5 stars Excellent
Reviewed in the United Kingdom on March 8, 2015
Verified Purchase
This book was a page turner - right from the start! The book really had everything - philosophy, psychology, history and paranormal activity. It is a great thriller - and towards the end - I was really on the edge of my seat! I loved Tony's struggle trying to consolidate his background with the world in which he was being shown. The sex scenes are unusual to say the least - but they are an integral part of the story rather than just put in for the sake of it. I would love to see a sequel to this as I was really interested in the main characters. In summary - An excellent read, incredibly well researched, very highly recommended.
Read more
2 people found this helpful
Report abuse

Bill Leach
5.0 out of 5 stars A thriller that has it all.
Reviewed in the United Kingdom on March 14, 2015
Verified Purchase
Set in present day London, the action switches from the here and now to Revolutionary France to post World War 2 London and back to the present. Our hero, an investigative journalist, researches a mystery that involves his own family, a psychic, a media mogul, high finance, the intelligence service, a secret society, politicians, murder, science and erotic sex. An interesting mix with plot twists and turns throughout, with the final twist saved until the very last page. It sounds complicated, but the plot flows very well with lost of surprises to keep the interest up all the way through.

The novel has been compared to Dan Brown. For me, the twists and turns in a Brown novel are flagged up so far in advance that there are few surprises. Dead Secret kept its secrets well right up to the final scenes when all became clear. An excellent read.
Read more
One person found this helpful
Report abuse

Avid Gardener
1.0 out of 5 stars Disliked this book
Reviewed in the United Kingdom on August 21, 2018
Verified Purchase
No story line, inconsistent, graphic unnecessary violent scenes which have no relevance.
Disliked this book.
Read more
Report abuse
See all reviews
Back to top
Get to Know Us
Make Money with Us
Amazon Payment Products
Let Us Help You
EnglishChoose a language for shopping. United StatesChoose a country/region for shopping.
© 1996-2021, Amazon.com, Inc. or its affiliates