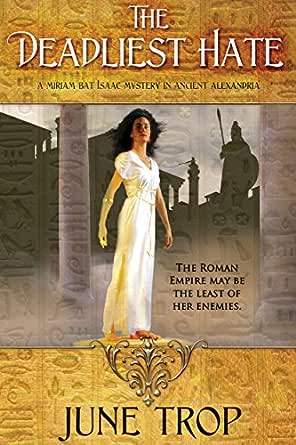 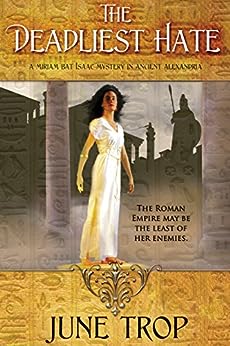 BijouRoi
5.0 out of 5 stars Terrific short story
Reviewed in the United States on May 25, 2018
Verified Purchase
I read it in 1-sitting & wished it were longer! Loved the detail & imagery!
Read more
Helpful
Comment Report abuse

Critical Mass
5.0 out of 5 stars You Will Definitely NOT Hate This Page Turner
Reviewed in the United States on December 4, 2015
Set in the 8th year (48CE) of the reign of the Roman Emperor Claudius, The Deadliest Hate continues the saga of Miriam Bat Isaac - alchemist, healer, and sometime "detective". Originally born and raised in ancient Alexandria, Miriam is attempting to retrieve some stolen scrolls containing a secret recipe that would enable someone to transmute copper into gold. The information contained in the scrolls could wreak total havoc on the economy of the Roman Empire with far reaching and deadly repercussions. Miriam's own life and the people close to her are also in danger from those who have the scrolls and would stop at nothing to prevent losing them. In order to retrieve the scrolls, Miriam finds it necessary to leave Alexandria and go to the harbor city of Caesarea (built by Herod the Great between 22-12BCE) in Judea. It is in the latter that the main action for Miriam's exploits takes place. As was the case with her previous book, The Deadliest Lie, Ms. Trop presents us once again with a virtual first person "eye witness" account of Miriam's gripping experiences along with a vivid and realistic re-creation of ancient Caesarea. Herod's Roman city is quite different than the Hellenistic-Egyptian city of Alexandria. For one, while the initial population was far smaller than that of Alexandria - probably about 50,000, of whom half may have been Jewish - it contained as did so many Roman cities an amphitheatre for gladiatorial games among other things. It is those bloody duels that are given extensive treatment and add to the overall palpable sense of menace, danger, and violence that pervades the backdrop of the world that Miriam has entered. The Deadliest Hate is much darker than its predecessor and, in the opinion of this reviewer, even more engaging. How to reacquire the scrolls; how to avoid death-dealing assassins; how to obtain the scrolls without endangering the lives of others; who actually stole the scrolls and why, are all questions that must be answered and dealt with. Ms. Trop is meticulous with every detail which gives the reader "a you are there" feeling. This never detracts but only adds to the visual appeal of the basic storyline. A 2 1/2 page Author's Note, a nearly 2 page Bibliography, and a nearly 5 page Glossary of Foreign Terms at the end of the book is an invaluable aid. Ms. Trop has successfully resurrected the spirit of Mary Renault and Norah Lofts.
Read more
3 people found this helpful
Helpful
Comment Report abuse

Andrew Kuligowski
4.0 out of 5 stars mystery in The Holy Land in 1st Century C.E.
Reviewed in the United States on June 4, 2016
Author June Trop has found a unique setting for a murder-mystery: Ancient Caesarea. In her second book documenting the adventures of potential alchemist Miriam Bat Isaac travels from her home in Alexandria to the country made famous in the New Testament shortly after the events documented in those writings.

I confess – at first, reading some of Ms. Trop's descriptions, I thought that she was simply showing off the results of her research into the millieu she set her tale. Soon, I realized that my initial impression was premature – the author was, in fact, successfully painting an image of the environs in which Miriam was wandering. Looking through this relatively short book, it was easily possible for the reader to close their eyes and picture themselves in Judea during the Roman occupation.

I was not able to embrace the characters in this book as easily as in some others. It's definitely not a requirement that a reader love the characters in order to fully enjoy a book, but I certainly prefer those in which the protagonists touch a pleasant tone within me. This could be due to the fact I jumped into the second book in this series. (I had no trouble following the plot or understanding the characters; the book avoided a common fault in series).

In summary – I enjoyed this book, but I did not absolutely fall in love with it. Still, I would like to read the first book in the series, and would be interested to see if my first impression wavers when future books are released.

DISCLOSURE: I was awarded a free copy of this book in a random draw. No requirement of a review was made, let alone any conditions on the tone / content of a review, however, it was suggested that “an honest review would be appropriate” upon winning.
Read more
Helpful
Comment Report abuse

Richard Meyersburg
5.0 out of 5 stars Fascinating and informative
Reviewed in the United States on March 17, 2016
I really enjoyed The Deadliest Hate and highly recommend it.
This story is extremely interesting and well paced. The background is scholarly researched and unusual. It presents us with a fascinating look into life, particularly Jewish life, in early Roman empire times. The book would be worth reading for that alone.
June Trop's Miriam bat Isaac is familiar to readers of The Deadliest Lie, the first book in this series, which I also recommend. She is an alchemist, which is an unusual occupation for a woman of those times, and a strong woman, with whom readers of both sexes can relate and like.
In this book, she journeys to Caesarea and we follow her adventures through the streets, shops, homes, public buildings and amphitheater of that city. Here we are presented not only with the sights of Caesarea but also the smells and the dangers of that city.
The description of fights between different types of gladiators in the amphitheater shows us how the Romans made their deadly sport more interesting by arming various categories of gladiators differently and pitting a combatant from one group against an opponent very differently armed, and having in addition different physical talents.
I could say more about this book, but I suggest that you read it, and discover for yourself what a great read it is.
Read more
One person found this helpful
Helpful
Comment Report abuse
See all reviews from the United States