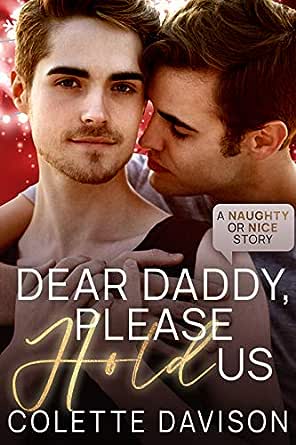 You've subscribed to Naughty or Nice! We will preorder your items within 24 hours of when they become available. When new books are released, we'll charge your default payment method for the lowest price available during the pre-order period.
Update your device or payment method, cancel individual pre-orders or your subscription at
Your Memberships & Subscriptions
There was an error. We were unable to process your subscription due to an error. Please refresh and try again. 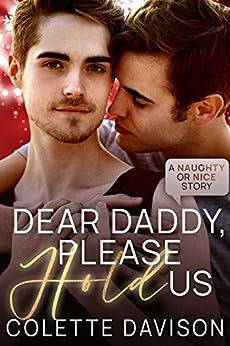 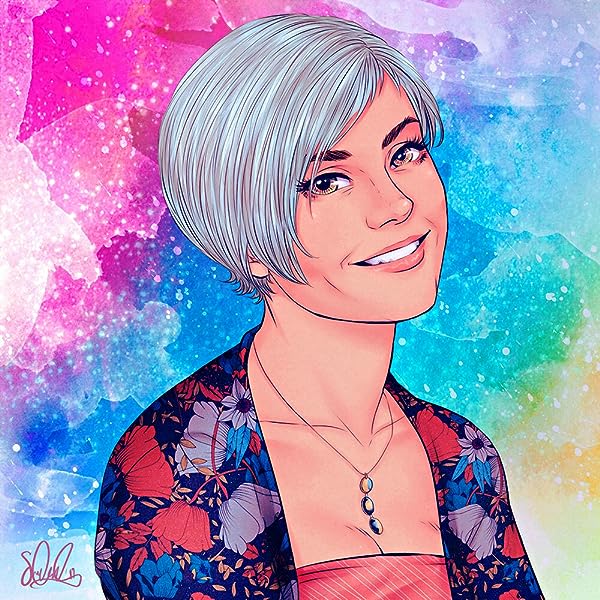 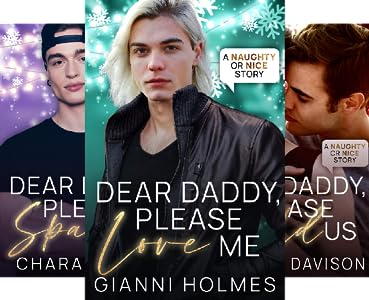 'Dear Daddy, Please Hold Us left me thrilled to have read this romance. Colette Davison perfectly combines the holidays with friends to lovers, and Daddy play. Every moment of this book is wonderful!' - Amy's MM Romance Reviews 'The Christmas scenes were absolutely perfect, loved everything - the shopping, the decorating, the baking, the lazy hours on the couch and watching movies - P-E-R-F-E-C-T! The romance was so good, so so good.'  - Reading Under the Rainbow '...it has is all. Sex, romance, kink, cuteness, and a little bit of drama.' Kyler B. Warhol 'If you're looking for a sweet, but oh so sexy, Daddy/boy story don't look any further, this is a great one.' - Xtreme Delusions 'A narrative with a solid plot, awesomely written, not one second repetitive. The happy end was everything!' - Loves Bytes Reviews 'I loved every single part of this book. It was fun, it was hot, it wasn't too cheesy even though they only had a week to be together and fall in love, it felt like the connection was there from the start, which is always important. Nothing makes me happy than throuples that just fit and these three fit.' - Real Talk Book Talk '...this is a novel totally worth reading and I wholeheartedly recommend you this story.' Crucify My Love Book Reviews 'If you love polyamory or Daddy/ boy relationships, this is the one-holiday story that will make you squeal with delight at all the feels.' - Sharonica Logic

4.6 out of 5 stars
4.6 out of 5
146 global ratings
How are ratings calculated?
To calculate the overall star rating and percentage breakdown by star, we don’t use a simple average. Instead, our system considers things like how recent a review is and if the reviewer bought the item on Amazon. It also analyzes reviews to verify trustworthiness.
Top reviews

Elin
2.0 out of 5 stars Not for me
Reviewed in the United States on December 24, 2020
Verified Purchase
This might be a case of it's not the book it's me but I just couldn't connect with the characters, and that something I really wanted because I've been waiting for a story with two boys and a Daddy.

Things just went too nice and easy, at one point it felt like the author had a different story in mind with Rett leaving and giving some more substance to it, but it changed to fluffy and more fluffy with a bunch of sex scenes that just made me go eh. It was a case of quantity over quality I felt.

Out of all the characters I liked Rett the most, but even he couldn't help me connect with the writing.
I'm gutted I couldn't like it more than I did.
Read more
3 people found this helpful
Helpful
Report abuse

JJ
5.0 out of 5 stars MMM well done, again!
Reviewed in the United States on December 21, 2020
Verified Purchase
I have read MMM books by Colette before, and again she nails it. Not only is the story itself well done, but the feelings the characters have shine through. To me, reading a book about a poly relationship in which one of the characters is clearly not as included as much as the other too-- be it physically, emotionally, or both-- leave me feeling "off" after I've read it. Nothing's worse than finishing a book that was advertised as a happily-ever-after with a heavy feeling of sadness and sympathy for the character who's frequently left out. THIS isn't like that. These three truly love each other and the expression, physically and verbally, is a constant, warm feeling throughout the entire book. There are no parts where one character is portrayed as less important while two of them are constantly schmoozy-woozy about each other. This is truly a feel-good story about three men deeply in love. The three-way sex scenes are both hot and believable. You know how sometimes you'll read a poly love scene, and the more you think about it, the more you realize "yyyyeah, no, that's physically impossible"? The three-way intimate scenes in this aren't usually portrayed as something from Cirque de Soleil. They are hot, inclusive, and not impossible. Hot scenes are best when you can actually imagine them, not be at a loss as to what in the hell they are doing when it could physically never happen without all of them being in some radioactive accident that makes them a stretchy superhero made of rubber.
Read more
2 people found this helpful
Helpful
Report abuse

wendy ballard
5.0 out of 5 stars love this book
Reviewed in the United States on December 9, 2020
Verified Purchase
Rett and Zeke loves each other but they are missing something that is tiring them apart since they cant be what the other needs so Zeke tries on a chance Santa letter to find a daddy who will love them both
This is a M/M/M story and it is one of the best one that i have read and it does make me want to go read all of the Naughty or Nice books
Read more
2 people found this helpful
Helpful
Report abuse

Katy Beth
5.0 out of 5 stars Thank You Santa
Reviewed in the United States on December 27, 2020
Verified Purchase
I really love how this story evolved and how heartfelt Zeke plea to Santa was. There were two beautiful and loving men that just needed something more and it seems Santa did the best job ever giving them what they needed.
Read more
One person found this helpful
Helpful
Report abuse

Porsha Johnson
5.0 out of 5 stars Such a fun, loving, and KINKY
Reviewed in the United States on December 10, 2020
Verified Purchase
I love how sweet this story is! I especially love how it was set up with two boys and a daddy that wasn't a silver fox. It was a story about healing, love, kink, and being open for anything.
Read more
One person found this helpful
Helpful
Report abuse

Kindle Customer
5.0 out of 5 stars Definitely nice
Reviewed in the United States on December 9, 2020
Verified Purchase
Unconventional love is always a nice diversion from the usual storylines. Good story. Fun to read. Looking forward to the next installment in the series.
Read more
One person found this helpful
Helpful
Report abuse

S. Webber
5.0 out of 5 stars Beautiful Love
Reviewed in the United States on December 11, 2020
Verified Purchase
Such a beautiful story. The author navigates this poly relationship with love, gentleness, and humor. Santa came through for this Daddy and two boys, one bold and carefree and the other little, gentle and sweet. A wonderful, fun read. Highly recommend
Read more
Helpful
Report abuse

Aerielle
5.0 out of 5 stars So sweet
Reviewed in the United States on December 19, 2020
Verified Purchase
I loved everything about this story. I loved the dynamics between Rett, Zeke and Micah. Low angst, sweet and hotttt!!!
Read more
Helpful
Report abuse
See all reviews