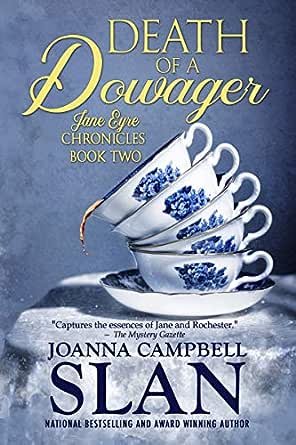 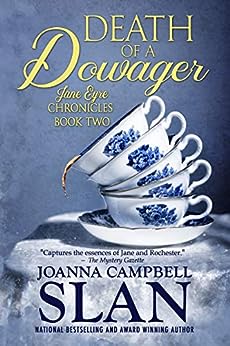 Death of a Dowager: Book #2 in the Jane Eyre Chronicles Kindle Edition

Jamie BJ
TOP 50 REVIEWER
5.0 out of 5 stars Jane Eyre Rochester, Amateur Sleuth
Reviewed in the United States on October 14, 2019
I am a massive fan of Jane Austen fan fiction, but I do not think I have ever read any Bronte sister fanfiction. This book is told from the perspective of Jane Eyre Rochester, a few years after her marriage to Edward. Love and their infant son have transformed their lives, but repairs are desperately needed at the manor house, and Edward’s sight continues to worsen. The Rochesters go to London and are caught up in a variety of machinations, including a political intrigue involving the new king and a murder that happens when Jane visits a woman for tea. Unfortunately, one of Jane’s good friends is a suspect. This pulls Jane in so she can attempt to clear her friend.

I thought the author actually did a pretty decent job, in parts, in mimicking the tone and voice of the original Jane Eyre novel. Jane is a fascinating character in many ways, and I like the way that she looks at the world; trying to exist within high society is not easy for her, so it is fascinating to watch events from her perspective. I think it is odd that the author has chosen to place this book at the tail end of the Regency Era as the original Jane Eyre was written in the late 1840s, clearly and definitely part of the Victorian Era. Perhaps she wanted to use some political intrigue from that time of transition to the new king, which wouldn't have been the same at all, of course, in the Victorian era. I found the political intrigue plot more interesting than the murder plot. As mystery plots go, it was relatively easy to follow and figure it out. I think the author needed a few more red herrings and twists and turns to make the mystery plot more engaging. But the political intrigue, as well as the interactions between Jane and those around her, kept me turning the pages. Frankly, though, I wish we had seen more of Mr. Rochester. All in all, I would say that if you enjoyed the original Jane Eyre and can forgive the author for inappropriately using the Regency Era, you will most likely enjoy this tale.

I received a free copy of this book, but that did not affect my review.

Dr. Patricia Eroh
5.0 out of 5 stars Excellent
Reviewed in the United States on December 4, 2019
Let me see! I love this era, I love this series, I love this story, I love how it is written, I love these characters, and I love everything about this series. What more could I want than an excellent mystery with a great amateur sleuth like Jane? This story is very compelling and I did not want to put it down! I am looking forward to the next book in the series.

Sandy Sez
5.0 out of 5 stars I’m loving this series
Reviewed in the United States on October 14, 2019
I’m not usually a fan of historical fiction, but I’m loving this series. It was an excellent read and I couldn’t put it down. The Rochesters spend time in London society while their home is being repaired. This mystery is extremely well written with a tight, multi-layered plot and engaging characters. I’m looking forward to future books in this series. I received this book free and chose to make a voluntary, unbiased review.
Read more
Helpful
Comment Report abuse

Mary Nickell
5.0 out of 5 stars Really enjoyable!
Reviewed in the United States on October 14, 2019
I really loved this book. I was immediately drawn into the story. I truly felt like I was in the time period reading this story and, having read the first book in the series, I enjoyed seeing the characters evolve. I definitely recommend this one.

Siyka N Mincheva
4.0 out of 5 stars A pleasant read
Reviewed in the United States on October 16, 2019
It was so good to be with Jane Rochester and her friends. The author did a good job of capturing some of the original character's charm.
I wish there was a bit more of Mr. Rochester but still, it was an enjoyable story!

Michele Wicker
5.0 out of 5 stars I love this historical cozy mystery series!
Reviewed in the United States on January 22, 2020
This series is a perfect continuation of the beloved Jane Eyre classic. Jane and Mr. Rochester are endearing, multi layered characters. I love learning about and living in historical times while being swept up into a fantastic fictional story line. I highly recommend this book and series!
Read more
Helpful
Comment Report abuse

Bobbi Jo Wagner
4.0 out of 5 stars Great story
Reviewed in the United States on November 6, 2019
This is not my first book by this author, but my favorite. The story was engaging and well developed. The characters made the story realistic. I read it in one sitting, it was fast paced. I can't wait to see if there will be another book in this series. I highly recommend this book.
Read more
Helpful
Comment Report abuse

Layla
5.0 out of 5 stars Death of a Dowager
Reviewed in the United States on October 30, 2019
The blurb had me intrigued and the book did not disappoint. This is for those who love historical fiction with a dash of mystery.
Looking forward to the other books in this series.
Read more
Helpful
Comment Report abuse
See all reviews from the United States