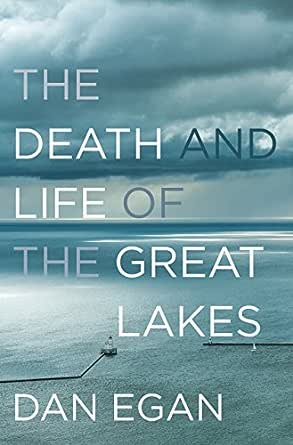 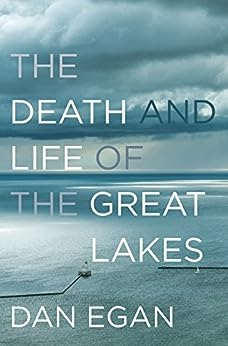 The Death and Life of the Great Lakes Kindle Edition

“Dan Egan has done more than any other journalist in America to chronicle the decline of this once-great ecosystem.”
- Judges’ citation, Grantham Award of Special Merit for Environmental Beat Reporting

“A compelling chronicle of the many, many (many) man-caused hazards that have threatened the largest source of accessible freshwater in the world.”
- Susan Glaser, Cleveland Plain Dealer

“A marvelous work of nonfiction, which tells the story of humanity’s interference with the natural workings of the world’s largest unfrozen freshwater system.”
- Anne Moore, Crain’s Chicago Business

“Important.… Egan’s book serves as a reminder that the ecological universe we inhabit is vastly connected and cannot be easily mended by humility and good intentions.”
- Meghan O’Gieblyn, Boston Review

“Egan’s knowledge, both deep and wide, comes through on every page, and his clear writing turns what could be confusing or tedious material into a riveting story.”
- Margaret Quamme, Columbus Dispatch

“A literary clarion call.… Egan’s narrative reflects a nuanced understanding of history and science, which is matched by his keen perceptions about public policy.”
- National Book Review --This text refers to the paperback edition.

Dan Egan is a reporter at the Milwaukee Journal Sentinel and a senior water policy fellow at the University of Wisconsin-Milwaukee's School of Freshwater Sciences. He has twice been a finalist for the Pulitzer Prize, and he has won the Alfred I. duPont–Columbia University Award, John B. Oakes Award, AAAS Kavli Science Journalism Award, and J. Anthony Lukas Work-in-Progress Award. A graduate of the Columbia Journalism School, he lives in Milwaukee with his wife and children. --This text refers to the paperback edition.

4.8 out of 5 stars
4.8 out of 5
426 customer ratings
How does Amazon calculate star ratings?
Amazon calculates a product’s star ratings based on a machine learned model instead of a raw data average. The model takes into account factors including the age of a rating, whether the ratings are from verified purchasers, and factors that establish reviewer trustworthiness.

James L. Wright
5.0 out of 5 stars Alarming with a backdrop of hope
Reviewed in the United States on April 18, 2017
Verified Purchase
How much can the Great Lakes take? Dan Egan chronicles the successive invasions by lampreys, alewives, and zebra and quagga mussels. (Interesting fact: under some conditions, these mussels can filter "all of Lake Michigan in less than two weeks, sucking up the life that is the base of the food web and making its waters some of the clearest freshwater in the world.") He explains why salmon were introduced in lieu of an emphasis on restoring native lake trout. He documents the spread of invasive species (into and out of Lake Michigan) through the flow-reversed Chicago Sanitary and Ship Canal. He follows the northward approach of bighead, silver, and black carp. He persuasively argues for ballast-loaded overseas ships transferring their cargo to local ships or railroad lines instead of squeezing though the St. Lawrence Seaway. Egan demonstrates the urgent need for the United States and Canadian governments to actively protect an eco-system holding 20% of the world's non-frozen surface fresh water. Most importantly, after all the bad news, Egan concludes with proposals and discoveries that provide hope for our Great Lakes. Fascinating reading; highly recommended.
Read more
72 people found this helpful
Helpful
Comment Report abuse

S3lD0M
5.0 out of 5 stars Bring yourself up to date. Join the conversation.
Reviewed in the United States on April 20, 2018
Verified Purchase
The first 2/3s of this book focuses on invasive species and the people who are contesting those biological incursions. There is a bit of history tying it all together, and a lot of fantastic research illuminating the issues, but a fair chunk of the story focuses on the impact and consequences as felt by the fishing industry, vacationers, the shipping industry, and municipal water managers. I greatly appreciated the occasional geological, ecological, and hydrological perspectives of the various scientists interviewed by the author, as well as the motivations and decisions of policy makers and how their endeavors affected the region.

The last third of the book looks to the future and addresses the concern of resource extraction, exploitation, and degradation. I would have loved to seen more of this topic, but the author finished on a positive note with restoration and rehabilitation being the rallying cry of anyone hoping to pass this regional treasure onto future generations (for better or for worse).

This should be purchased and passed around the Great Lakes communities so that the 40-50 million locals can appreciate what they have before it is lost. Politicians only care about their reputation while in office, and profiteering capitalists only see this land as an opportunity for personal gain. Authors like Dan Egan provide us with the knowledge necessary to protect and defend these fragile and finite resources. This is an important work of journalism and deserves the respect and appreciation of anyone and everyone living in the Great Lakes Watershed.

Jeff D.
5.0 out of 5 stars Like a murder mystery
Reviewed in the United States on May 11, 2017
Verified Purchase
Maybe not of interest to everyone, but if you have history with, and love for the Great Lakes this is a great read. I turned the pages like it was a murder mystery and I could hardly wait to find out the next clue about what would live and what would die beneath the waves. Full of fascinating science and interesting trivia and history. I am going to read it again to help me remember what I learned.
Read more
26 people found this helpful
Helpful
Comment Report abuse

Ben W. Washburn
5.0 out of 5 stars COMPLEX ISSUES BROKEN DOWN FOR THE AVERAGE READER
Reviewed in the United States on January 12, 2018
Verified Purchase
I've had the advantage of hearing Dan Egan from a front row table promote his book, and he was very good. But, his writing is 10X better than his speaking skills. He takes complicated issues and breaks them down for the average Joe. I recommended this book to my book club, which is currently reading it. All of the feedback is fantastic positive. He places these issues in both a national and international context. It's not just another regional issue. About the only significant threat which he misses is the 65-year-old oil pipeline which runs under the Mackinaw Straits. But, that may have come to the forefront after his book went to print. He makes a cogent argument that the Great Lakes are left open to the import of more invasive species in small ship ballast tanks, which are the only ones which can still get through the St. Lawrence Seaway, and these ships bring less than 2% of foreign cargo into the United States. Bottom Line: That cargo could just as easily be off-loaded to trains and trucks at our seaports at very little extra cost. I would like to see a more quantitative economic analysis of this argument. But, Egan is a newspaper reporter, not an economist.
Read more
23 people found this helpful
Helpful
Comment Report abuse

Kem White
4.0 out of 5 stars An Interesting Discussion of Great Lakes Ecology
Reviewed in the United States on November 20, 2017
Verified Purchase
This is an excellent telling of the ecology of the Great Lakes. It emphasizes the role that invasive species have played in the decline of the Great Lakes during the 20th Century. The book can be trying to read if you love the Great Lakes and grew up near them as I did; almost everything humans have done in and to the Great Lakes watershed have caused problems. But it helps to have a concise discussion and history of those problems and Egan's book does this admirably. The book is very well written. The narrative flows quickly and Egan does a great job of keeping your interest piqued. Egan makes clear that in a natural system as complex as the Great Lakes, humans really have little clue what we are doing. Nor do we have the insight to understand what our actions will cause decades hence. I've feared for some time that as a planet and species, we're screwed. Sadly Egan's book did little to allay that fear. Highly recommended.
Read more
13 people found this helpful
Helpful
Comment Report abuse
See all reviews from the United States

Jeanne
5.0 out of 5 stars Spectacular!
Reviewed in Canada on August 10, 2017
Verified Purchase
Spectacular! Elegantly written, the narrative is compelling, informative, and surprising. A "child of the Great Lakes", I learned so much more than I imagined I would, and remain in awe of how Egan let's this story unfold through multiple lenses including history, social justice, the environment, and economic development. An absolute pleasure, and a must-read!
Read more
One person found this helpful
Helpful
Sending feedback...
Thank you for your feedback.
Sorry, we failed to record your vote. Please try again
Report abuse

Emily Stone
5.0 out of 5 stars No Complaints.
Reviewed in Canada on January 24, 2018
Verified Purchase
The book contains the information I was searching for and the service was good too! No complaints.
Read more
Helpful
Sending feedback...
Thank you for your feedback.
Sorry, we failed to record your vote. Please try again
Report abuse

Marco Buseghin
5.0 out of 5 stars Must read
Reviewed in Italy on December 5, 2017
Verified Purchase
A very useful book: our ecosystem can be damaged by human activity but foresight and planning can avoid and fix many of the damages.
Read more
Helpful
Sending feedback...
Thank you for your feedback.
Sorry, we failed to record your vote. Please try again
Report abuse
Translate review to English

Ellen
5.0 out of 5 stars Very well researched.
Reviewed in Canada on August 4, 2017
Verified Purchase
Bought this for my husband & he is halfway through it and is enjoying it very much. He is also shaking his head at the damage humans can do to the Great Lakes.
Read more
Helpful
Sending feedback...
Thank you for your feedback.
Sorry, we failed to record your vote. Please try again
Report abuse