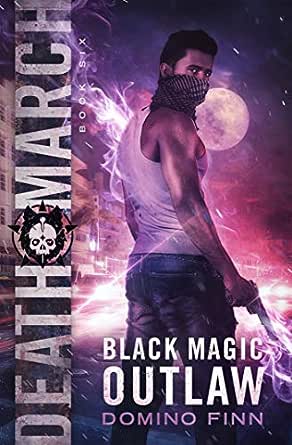 You've subscribed to Black Magic Outlaw! We will preorder your items within 24 hours of when they become available. When new books are released, we'll charge your default payment method for the lowest price available during the pre-order period.
Update your device or payment method, cancel individual pre-orders or your subscription at
Your Memberships & Subscriptions
There was an error. We were unable to process your subscription due to an error. Please refresh and try again. 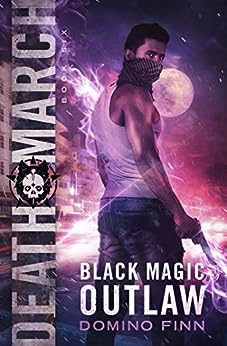 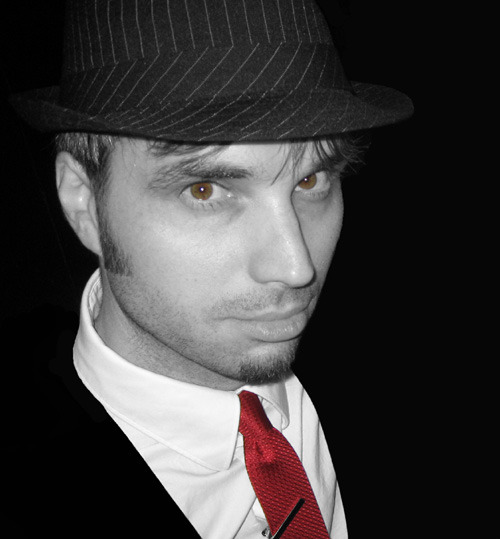 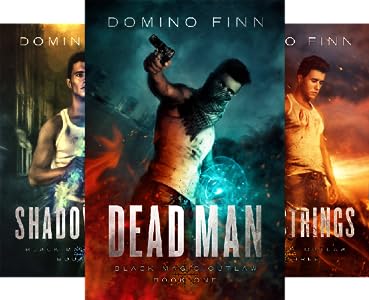 "If you like Jim Butcher (Harry Dresden), Ilona Andrews (Kate Daniels), Larry Correia (Monster Hunter International), and Elliot James (Pax Arcana) then you are going to love Domino Finn's contribution to the smart-talking MC that's perpetually stuck between a rock and a hard place."

"More magic, twists, turns, and surprises than you can shake a stick at. Urban fantasy just went up a notch."

"Black Magic Outlaw is a standout in a world of lookalikes."

"The magic is far more imaginative than anything I have read since Sanderson."

"A quantum leap in storytelling."

"Cisco is the kind of character you can't help cheering for, with a mix of boyish charm, a dash of arrogance, but always the bighearted underdog."

"Action junkies will love this series."

"A fun magic system, great atmosphere and setting, and a heroic yet tarnished protagonist who finds some pretty creative ways to defeat his enemies."

"Gritty. Raw. Finn spices his narrative with humor and floods it with tension. I just love the noir style."

"Despite being a hard-charger with some seriously cool black-magic chops, Cisco is fun to hang out with."

"What a great path of destruction Cisco leaves."

Domino Finn is an award-winning game industry veteran, a media rebel, and a grizzled author of urban fantasy and litRPG. His stories are equal parts spit, beer, and blood, and are notable for treating weighty issues with a supernatural veneer. If Domino has one rallying cry for the world, it's that fantasy is serious business. Take a stand at DominoFinn.com --This text refers to the paperback edition.

4.8 out of 5 stars
4.8 out of 5
81 customer ratings
How does Amazon calculate star ratings?
Amazon calculates a product’s star ratings based on a machine learned model instead of a raw data average. The model takes into account factors including the age of a rating, whether the ratings are from verified purchasers, and factors that establish reviewer trustworthiness.
Top Reviews

Deborah Boley
5.0 out of 5 stars Unlikely hero of an urban fantasy involving magic and mayhem!
Reviewed in the United States on February 11, 2019
Verified Purchase
Great urban fantasy with magic and mayhem. This was my first encounter with Cisco and I'm hooked! The characters are described in such detail that they seem real people. I love the quirky traits. Referencing past experiences in the book made me want to check out the whole series.
The basic story involves an unlikely hero and his friends who band together to find a mysterious murderer and stop a mob of vampires who threaten Miami's safety. Involve the police and the FBI, plus a zealot head of the HOA trying to oust Cisco from his home, and the story heats up. Action, drama, humor, and romance all rolled up in the tale. Great read! Looking forward to catching up on the rest of the series!
Read more
One person found this helpful
Helpful
Comment Report abuse

C.R.
5.0 out of 5 stars Once again Domino Finn knocks it out of the park with his Black Magic Outlaw series!
Reviewed in the United States on April 19, 2018
Verified Purchase
Cisco has become a full fledged legal member of society. He’s declared alive, has a driver’s license, a sweet condo, and a nice car instead of a haunted pick-up truck. He’s got a great relationship with his friends and his daughter Fran, even if she doesn’t know she’s his daughter. But we readers now Cisco’s life can’t be warm and peachy forever....

Once again Domino Finn knocks it out of the park with his Black Magic Outlaw series! Picking up this book was like reconnecting with an old friend, and I was able to jump right back into it even though it's been a while since we've seen some new Cisco. The story was once again a real page turner, and I eagerly soaked up every word.

I can't wait for more stories about Cisco and the gang!

*I received an ARC copy of this book for an honest review, but I also purchased it afterwards.*
Read more
One person found this helpful
Helpful
Comment Report abuse

Anders Haywood
5.0 out of 5 stars This series just keeps getting better!
Reviewed in the United States on May 1, 2018
Verified Purchase
I honestly didn't think anything could top Fire Water. It was so well written and closed so many threads, I thought the series had reached its' peak.
But Death Merchant somehow manges to be better in all aspects, while leaving open a bunch of new story threads for the future. This really helps the series as a whole feel fresh and new while giving us the same group we so love.
I won't give more away for fear of spoilers, but if you're new to this series, this would be a great place to start.
I cannot wait for the next one!
Read more
One person found this helpful
Helpful
Comment Report abuse

Cyberbass22
5.0 out of 5 stars Great follow up series. On par with Butcher/Dresden
Reviewed in the United States on January 29, 2019
Verified Purchase
If you like Urban Fantasy give this series a shot. Having read a lot of different Urban Fantasy series (the still pending Dresden series and Hellion to name a few) I found this story and works to be a great departure in the magic system and works building that is unique and thought provoking. Fast paced action and humor that lands make it hard to put down. Try it out and enjoy!
Read more
Helpful
Comment Report abuse

Amazon Customer
4.0 out of 5 stars Finn Delivers Again
Reviewed in the United States on May 1, 2019
Verified Purchase
Cisco is a fully relatable tough guy with a soft center, an homage to the grizzled gumshoes of a bi-gone era. The city of Miami comes to life in all of its sizzling and sweltering glory as Cisco careens from one crisis to the next. Barely a step behind a diabolical serial killer who is targeting animists and barely one step ahead of a lethal cabal of human trafficking vampires.
This is a great read for any fan of urban fantasy and a worthy installment in the Black Magic Outlaw series.
Read more
One person found this helpful
Helpful
Comment Report abuse

ryan davis
5.0 out of 5 stars Such a great read!
Reviewed in the United States on September 8, 2018
Verified Purchase
These books just keep getting better and better as soon as i finished the first book number two was already ordered and delivered waiting for me love watching cisco go through everything and evolve as he has its great read these books your only disappointment will be when you finish a book and dont have the next one in hand ready to go if you love jim butchers harry dresden then you will love domino finns cisco suarez they are not the same guys at all but they both fight for what they believe in domino finns books stand on there own feet and will keep you hungry for more
Read more
Helpful
Comment Report abuse

BrazenHawk
5.0 out of 5 stars Cisco just can't walk away from a fight!
Reviewed in the United States on April 20, 2018
Verified Purchase
Often times, as a series progresses it becomes "more of the same", but Domino keeps it going, and keeps adding new twists and turns to keep the series interesting and full of life. This book is full of old friends, and plenty of new enemies.

In typical Domino Finn style, I couldn't put it down and was "enthralled" and only stopped reading it when I was done, and it left me in want for more! If you're a Cisco fan, this won't disappoint you.
Read more
Helpful
Comment Report abuse

Kindle Customer
5.0 out of 5 stars A Worthy Series
Reviewed in the United States on September 4, 2019
Verified Purchase
This series was well written, with lots of action and outstanding character development. The lead charicer is a true anti-hero, wirh all the baggage that brings. I look forward to this story continuing.
Read more
Helpful
Comment Report abuse
See all reviews from the United States

Customer X
5.0 out of 5 stars Cisco is back!!
Reviewed in the United Kingdom on December 30, 2018
Verified Purchase
If you have read the previous 5 books you will have a fair idea of what to expect - and I'm giving no spoilers - if you haven't read books 1-5 then go get them! This is a series tha t deserves binge reading. Wizard/sorcerer, voodoo and vampires and don't forget the wraith.... What more could you want.....
Read more
Helpful
Sending feedback...
Thank you for your feedback.
Sorry, we failed to record your vote. Please try again
Report abuse

leah k nishiyama
4.0 out of 5 stars Can’t wait for more
Reviewed in Canada on March 1, 2019
Verified Purchase
Finished the series, want more! It was an interesting run through the gritty underbelly of a steamy magic filled Miami, lots of action decent world building , good characters who kept developing layers book after book. Plot lines were solid if familiar but the twists and turns made them unique. Looking forward to more in this series and gonna check out a few other of Finns worlds
Read more
Helpful
Sending feedback...
Thank you for your feedback.
Sorry, we failed to record your vote. Please try again
Report abuse

Juan Pablo
5.0 out of 5 stars GREAT!!!
Reviewed in Mexico on June 8, 2018
Verified Purchase
Fast and fun from start to finish.
The characters amazing as always
Loved it from start to finish
Thank you Finn...
Read more
Helpful
Sending feedback...
Thank you for your feedback.
Sorry, we failed to record your vote. Please try again
Report abuse