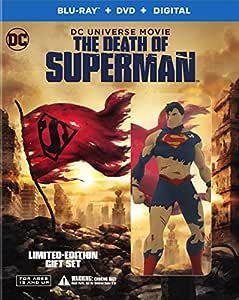 Based on the acclaimed DC Comics graphic novel comes an epic animated movie showcasing Superman’s greatest battle. An asteroid hurtles through our atmosphere and crashes into the ocean, with it arrives an unstoppable force fueled by uncontrollable rage known only as Doomsday! With innocent lives threatened and Metropolis under attack, Batman, Wonder Woman and the rest of the Justice League rally to meet this otherworldly menace. But when the dust settles, only an epic showdown between Superman and Doomsday can decide the fate of Metropolis and ultimately, planet Earth!

4.6 out of 5 stars
4.6 out of 5
1,674 global ratings
How are ratings calculated?
To calculate the overall star rating and percentage breakdown by star, we don’t use a simple average. Instead, our system considers things like how recent a review is and if the reviewer bought the item on Amazon. It also analyzes reviews to verify trustworthiness.

Well, I was wrong. This film captures the spirit of the epic comic while still crunching it down into an 80 minute story that I just wish was longer. I haven't loved a DC animated film this much since Batman: Under the Red Hood. And it stands among the upper echelons of the animated films that chose to focus more on character than action and greatly benefited from it.

While not a straight retelling from the comic or the Roger Stern novel, it touches upon the points that needed to be made to set up for the second half the tale, Reign of the Supermen, and captured the spirit of the story by revolving around Clark the man and Lois. I actually liked how the incorporated the newer Justice League elements from recent films even though I haven't loved most of the newer Justice League movies. Their characters only served to enhance the story here.

I intend to buy this on the day of its release and encourage any fan of DC/Superman/superheroes to do the same and send the message back to WB/DC animation that these are the kinds of stories we want to support--stories with heart and soul.
Read more
92 people found this helpful
Helpful
Comment Report abuse

Revenant
5.0 out of 5 stars One of the best movies from DC I've seen in awhile
Reviewed in the United States on August 8, 2018
Verified Purchase
Full disclosure, I've never really read any of the Superman comics, but after watching this movie I can finally see why people like Superman. Unlike the live action versions of Superman, in recent movies, this one actually shows Superman care about civilians and he treats their safety like it's the most important thing in the world. Not only that, but you can tell how much they in turn appreciate him as well. It's not a long movie (80 mins), however I think it's just about right amount of time for the story that's being told. Overall, I thought the movie was great with only a couple nitpicks. I'd recommend this for any superhero movie fan.
Read more
12 people found this helpful
Helpful
Comment Report abuse

Dave the Collector
5.0 out of 5 stars Worthy of adaptation of the original comic and then some!
Reviewed in the United States on August 7, 2018
Verified Purchase
Loved the original comic book story and was hesitant about buying this movie because 1) I haven't been a huge fan of the recent Justice league animated film adaptations and 2) Superman Doomsday was the first film to kick off these animated movies so why revisit. But boy was I wrong!!!!! This is one of the greatest animated adaptations, on par with The Dark Knight Returns. You fall in love with the characters and get to know Clark and Lois intimately leading up to the epic battle with Doomsday. And this animated fight puts the battle from Superman Doomsday battle to shame! I was on the edge of my seat the whole time, from when the Justice league faced off against Doomsday to the battle with the man of steel himself. Additionally, throughout the film you'll get quick introductions to the men characters who will take center stage in the "Reign of the Supermen" movie coming out next year. Oh and this movie definitely puts Dawn of Justice to even more shame.
Read more
10 people found this helpful
Helpful
Comment Report abuse

Kindle Customer
5.0 out of 5 stars Best DC animation movie to date
Reviewed in the United States on October 26, 2018
Verified Purchase
I am very impressed with DC's latest entry and I feel that they nailed all aspects of this great tale perfectly. This film is PG13 but does not shy away from the violence of DOOMSDAY. Any person in his way is murdered....like, really murdered, no mercy, just death. The gruesome stuff happens off screen, but leaves the viewers with little doubt as to the outcome of those interactions. When the fighting starts in the third act of the movie, it is unrelenting and a beautiful ballad of destruction between DOOMSDAY and the Justice League, who are smashed with ease. Wonder Woman shows how bad to the bone she is, but DOOMSDAY is ......DOOMSDAY.
The voice work is superb and the animation is clean on Blu-ray. The new 52 costumes are dated now (see comics), but the continuity between all of the past titles is really good. I truly loved the emotion of the characters, the humor, and the flat out action of the biggest brawl since Tyson- Holyfield. Best action of any DC animation movie. There are no pretend deaths for civilians. Civilians are collateral damage and it is shown in the movie, as DOOMSDAY destroys any person in its way (cape or not). The city is drawn with people and is alive, unlike the Teen Titans Vs. Justice League movie where Trigon smashes an empty city with no victims. Wheew!! I have to watch this again to take it all in. 70 minutes flies by. This movie's version of Doomsday is 10x better than the Superman vs Batman movie version. This DOOMSDAY
Read more
3 people found this helpful
Helpful
Comment Report abuse
See all reviews

nedjmeddin suleyman
5.0 out of 5 stars Super steelbook
Reviewed in the United Kingdom on August 11, 2018
Verified Purchase
Awesome steelbook and awesome movie...have two of these bad boys and a regular copy also..
Read more
One person found this helpful
Report abuse

David Hughes
5.0 out of 5 stars Perfect
Reviewed in the United Kingdom on January 13, 2019
Verified Purchase
All collectors will love this item
Read more
Report abuse

Abdul H.
5.0 out of 5 stars Must Buy.
Reviewed in the United Kingdom on September 9, 2018
Verified Purchase
Love it.
Read more
Report abuse