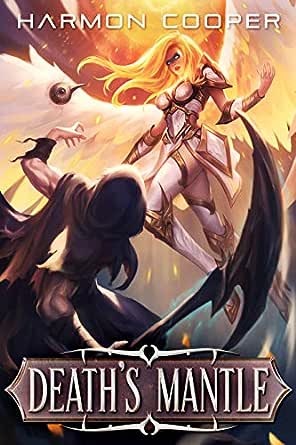 You've subscribed to Death's Mantle! We will preorder your items within 24 hours of when they become available. When new books are released, we'll charge your default payment method for the lowest price available during the pre-order period.
Update your device or payment method, cancel individual pre-orders or your subscription at
Your Memberships & Subscriptions
There was an error. We were unable to process your subscription due to an error. Please refresh and try again. 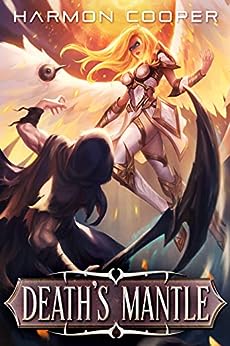 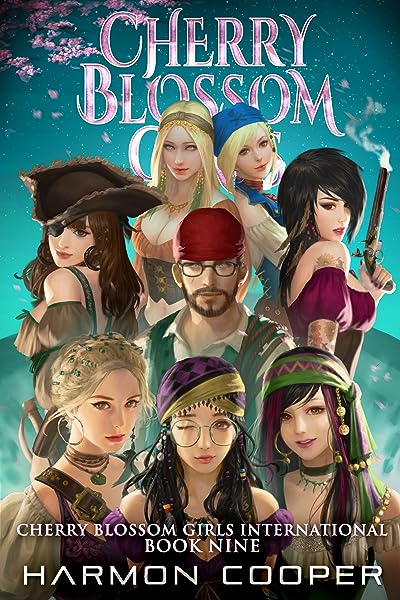 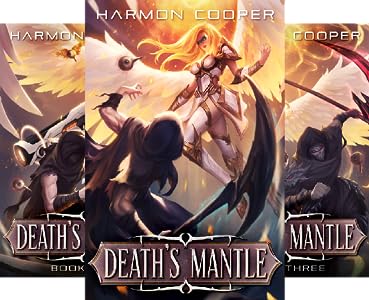 Thank you for making Death's Mantle a bestseller!
Death's Mantle 2 will be out in January, and the audiobook, produced by Podium Publishing and narrated by Andrea Parsneau, will be released on December 17th 2019.

4.6 out of 5 stars
4.6 out of 5
118 customer ratings
How does Amazon calculate star ratings?
Amazon calculates a product’s star ratings based on a machine learned model instead of a raw data average. The model takes into account factors including the age of a rating, whether the ratings are from verified purchasers, and factors that establish reviewer trustworthiness.

Miss Mo
4.0 out of 5 stars Super unique
Reviewed in the United States on February 9, 2020
Verified Purchase
You know, I didn't really know what to expect when I bought this book, but I have to say I was very pleasantly surprised. A fourth of the way through the book I wanted to stop reading, but I stuck through it and by the halfway mark I begrudgingly decided to go ahead and finish it. By the end of the book however, I'd become a fan and am looking forward to book 2. So it took a while for this book to get a hold of me, but once it did, its hold was substantial.
Read more
One person found this helpful
Helpful
Comment Report abuse

Phoenix
5.0 out of 5 stars Good new world
Reviewed in the United States on November 27, 2019
Verified Purchase
I Like this one. Taking on the role of death is not easy. There is no manual and little instruction. This make a fun read as the MC must learn on the fly and learn fast. The rules are not written but assumed and our hero (dead) is taking that exploit to the limit. He learns that not everything is as it seems or portrayed. I look forward to more of this series.
Read more
One person found this helpful
Helpful
Comment Report abuse

Daeleon
5.0 out of 5 stars Stop whatever you are doing and read this book
Reviewed in the United States on June 1, 2020
Verified Purchase
Yes, it is that good. It's more than just a good story with interesting characters. The way the author introduces game mechanics while still leaving tremendous room for growth and creativity is brilliant!

The world is teased to the reader a small piece at a time but it is all done creatively and consistent with the developing story. The potential here is immense.

I especially appreciated the author's note at the end that confirmed many of my thoughts on influences in the story.
Read more
Helpful
Comment Report abuse

Emmanuel Chrisohoides
3.0 out of 5 stars Interesting story but not my cup of tea.
Reviewed in the United States on March 12, 2020
Verified Purchase
The idea of someone dying and becoming the grimm reaper is what got me to start reading this book to begin with. As much as I wanted to like this book I just couldn't get myself to continue reading.

For starters, I found the main character to be very boring and annoying. He was way to good at his job as death from day one, could practically use any weapon as if he had been practicing for years, and he had a very dry personality. I just couldn't get myself to care about him.

The last thing that caused me to lose interest was the video game theme the book had going on. Boy finds himself in a strange land and suddenly has the ability to level up and has a user interface with statistics that can manifest out of thin air. That's like the theme of some sort of generic anime.

Despite the interesting story I just could not get myself to finish this book. It just wasn't for me.
Read more
Helpful
Comment Report abuse

Chip
5.0 out of 5 stars An interesting concept of life versus death!
Reviewed in the United States on April 21, 2020
Verified Purchase
I liked that the story line tries to deal with the hardship of seeing a loved one in the hardship of drug addiction, and feeling the helplessness of not being able to rescue him. The way the author portrays death and life is a very interesting conflict. The blurred lines between good and evil, and the corruptibility of both is also portrayed in an interesting fashion.
Read more
Helpful
Comment Report abuse

Shane82us
4.0 out of 5 stars It was good and original
Reviewed in the United States on October 16, 2019
Verified Purchase
I honestly liked the book. For some reason it wasn't one that i couldn't put down until it's finished, but it was one that I wanted to finish. I did enjoy it and will buy book two and see where it goes.
Read more
One person found this helpful
Helpful
Comment Report abuse

Robert
4.0 out of 5 stars I'm conflicted about this book 3.5 stars really
Reviewed in the United States on May 21, 2020
Verified Purchase
It was a good book but the fighting seems constant he is either stalking his brother ,or hunting to get stronger that seems to be 95% of this book, and after a while it just drags the end gets interesting but I could skip the whole middle of the book and not miss much. Doubt I will continue with this series
Read more
Helpful
Comment Report abuse

Steven Sobotta
5.0 out of 5 stars Hard to put down
Reviewed in the United States on March 30, 2020
Verified Purchase
It has a lot of fun, some action, some slow spots. A good read that is hard to put down. I really like how the main characters interact and slowly grow into their own ways. The interaction between them is amusing by itself.
Read more
Helpful
Comment Report abuse
See all reviews from the United States

Kevin Miller.
5.0 out of 5 stars Bazzinga
Reviewed in the United Kingdom on November 25, 2019
Verified Purchase
Dude that was a break of from the norm and I thoroughly enjoyed reading every page I was pulled quickly into the story and enjoyed the characters development as he came to terms with his situation and started to develop more I enjoyed the fight scenes also kind of reminding of several games I have played over the years there's a game called protoype that really resonates with parts of battle mechanics too many many many thanks Harmon for another amazing book I look forward to the next instalment of Deaths Mantle.😁
Read more
Helpful
Sending feedback...
Thank you for your feedback.
Sorry, we failed to record your vote. Please try again
Report abuse

G T.
5.0 out of 5 stars Why did it have to end
Reviewed in the United Kingdom on November 26, 2019
Verified Purchase
This story, I have been putting off reading for a while, I hadn't read very much in a long time due to various reasons, but I started it, and have not been able to put it down, sneaking a few pages here and there.

The story progresses along throughout the book, the plot expanding along with the ever growing inventory list.

Here's looking at you Q-daddy.

I completely recommend this book, even just the little bit at the back of the book after the story was over deserves 5 stars, if I could I would give it many, many more