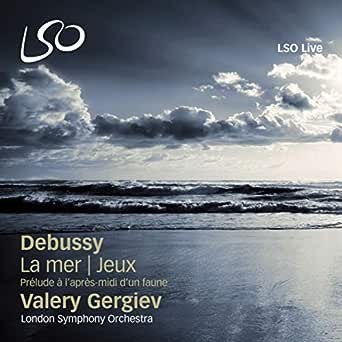 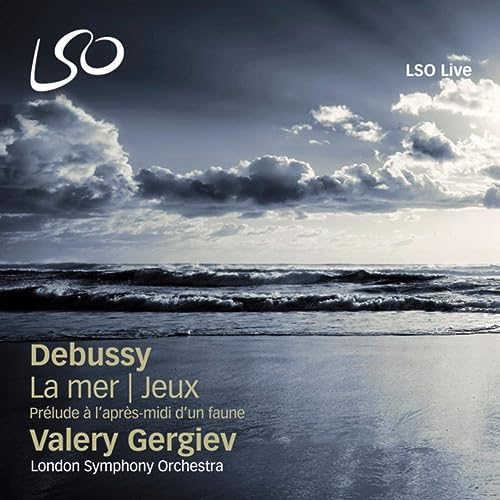 Ethan E. Matthes
3.0 out of 5 stars Very Nice Faun and Jeux; Boring La Mer
Reviewed in the United States on October 23, 2020
Verified Purchase
Gergiev is a controversial public figure. Much criticism is deserved: Being on the wrong side of social issues and Russian geopolitics; his poor stewardship of orchestras where he's been Chief Conductor and some truly lousy recordings (Rite of Spring and Shostakovich Symphonies). I think Gergiev's poor reputation in the world unfairly colors critic's reviews of some recordings, this one included.

To get the bad out of the way, there are so many fantastic recordings of LaMer, and unfortunately this isn't one.

Now the good... I don't think this Faun is slow and boring as some critics have labeled it. Gergiev stretches and compresses the tempo, but each part flows naturally. The soloists' playing is fantastic, and the balance is good. It sounds impressionistic (unlike Bernstein or other romantic interpretations). The SACD sound is good.

The same can be said of this Jeux variation.

So, if you can get a used copy of this used album for a few bucks, do it, enjoy it on your SACD player!

williamford8
5.0 out of 5 stars A brilliant recording of celebrated works
Reviewed in the United States on June 9, 2011
Verified Purchase
Debussy is one of the world's best-loved composers. His 'Prelude' is recognized the world over and evokes summertime bliss. In this recording Gergiev ponders over the notes, teasing us with the musical delights and building up the romance of the work to a climactic ending. The rest of the album balances out perfectly with the 'Prelude' and you can almost taste the salt water in 'La mer'. It's brilliantly recorded and even the quietest notes are heard. A wonderful interpretation and one of the best recordings i've heard in a long time.
Read more
15 people found this helpful
Helpful
Comment Report abuse

Huntley Dent
HALL OF FAME
5.0 out of 5 stars One of the greatest Debussy recordings in years
Reviewed in the United States on April 12, 2011
It's safe to say that no Russian conductor from the past made an impression with Debussy, even though the Paris-Moscow axis had a huge influence on modern art (in ballet, painting, theater). Gergiev would seem to be making a stealthy approach to Debussy's two most famous orchestral works, but in fact he has widely performed both the Afternoon of a Faun and La mer. One of this great conductor's strengths is in the shaping of quiet, nuanced music, and his version of Faun is the most delicate I've ever heard, superbly balanced on the verge of tremulousness. The opening flute solo approaches from the shadows, and although the eroticism of the faun doesn't appear, Debussy's magical orchestration is given full play - delicious. There is more warmth than in Boulez's two accounts, so as famous as they are, I would call this new one my favorite among modern recordings.

It's now customary to play La mer as an orchestral showpiece in the same league as Stravinsky's Rite of Spring and the Bartok Concerto for Orchestra. I've heard James Levine lead the BSO in a thrilling reading that put even Munch in the shade. Gergiev takes a different tack, focusing, as in Faun, on the gossamer orchestration of the atmospheric sections, to the point that some listeners may miss the expected drama of the sea in turmoil. He's not fussy or cautious (charges that could be leveled against Michael Tilson Thomas and Esa-Pekka Salonen in this music), but we're some distance from Karajan's famous account with its blazing virtuosity. Limited to fewer big surges, the LSO plays with such variety and color that I heard La mer with fresh ears, transported into the heart of the orchestra through intimacy. As a balancing act between drama and impressionism, I found this an engrossing reading and remarkable proof of Gergiev's rapport with his orchestra, five years into their partnership. A haunting experience.

For the general audience, Jeux has been a problem child among Debussy's major orchestral works, being diffuse, unmelodic, and harmonically elusive. The Nijinsky ballet for which it was written centered (improbably) on a game of tennis, but don't expect competitive thrills or playfulness - Jeux is almost an abstract study in textures. The only previous recording that fully captured my attention was by Lorin Maazel (on RCA/BMG), displaying his full command of orchestral technique. My usual experience is that Debussy's final orchestral work lasts a long 18 minutes. Gergiev's approach is intriguing in that he accents the score as if it were the Firebird, bringing out sharp colors and eerie atmosphere. Among the variable recordings engineered in the Barbican, this one is detailed and clear, so one hears the fine sewing that Debussy knits together. There is more drama, more rise and fall than in Haitink's widely admired, and excellent version. I must admit that without quite getting Jeux, I stayed the course with pleasure. Gergiev's evident enthusiasm carried me along.

For some reason I haven't read any raves for this CD, perhaps because Gergiev is taken granted as the workaholic among conductors - no one else produces recordings at this rate nowadays. But no one who loves Debussy should consider this just another La mer and Afternoon of a Faun. There is much more to listen to and be fascinated by.
Read more
6 people found this helpful
Helpful
Comment Report abuse

T. E. Layman
3.0 out of 5 stars Debussy Overdone!
Reviewed in the United States on August 8, 2014
I would have liked to give this a better number of stars, because I do think Gergiev is a fantastic conductor. But the recording of these pieces just is too, too loud! The fff and ffffs come at you like rogue waves, and are well too loud for the surrounding sound and are too violent. I thought maybe it was listening in 2.0 (called Stereo by us old geeks), but in listening to it in 5.1 surround with very good speaker I came to the same conclusion. Just over-whelming. In the majority of the La Mer the gentle sounds are gorgeous and beautifully played. There just isn't too much that one can do to interpret except to play loudly and aggressively, and unfortunately that's wha Gergiev (or the engineers) seem to have opted for. There are many many better recordings.
Read more
5 people found this helpful
Helpful
Comment Report abuse

Timothy A. Evans
2.0 out of 5 stars Not very good
Reviewed in the United States on December 22, 2011
Do not waste your time on this recording. It is not that involving or idiomatic. The recording is quite good for a live Barbican performance. I came to Gergiev thinking he had quite a reputation, but after listening to a bunch of his Mahler recordings and now this, I am disappointed. He appears to be picking repertoire that does not suit him well. There are many, many great recordings of these pieces, try Karajan from the 1960's on DG or Haitink from the 70's on Phillips(Universal)
Read more
8 people found this helpful
Helpful
Comment Report abuse
See all reviews

A/Burrows
4.0 out of 5 stars Debussy's La Mer and other works!!!
Reviewed in the United Kingdom on March 23, 2015
Verified Purchase
These are wonderful recordings of Debussy's La Mer, Jeux and Prelude by Valery Gergiev and the London Symphony Orchestra on their LSO Live label from 2009/10. Gergiev has shown in his partnership with the LSO that he is not afraid to record or perform not just Russian repertoire but composers like Brahms, Ravel and Debussy as well.

The Prelude a l'apres-midi d'un faune has understated but beautiful playing, with a fine flute solo and Jeux is given a sparkling performance.

But the main highlight for me is La Mer, which contains moments of power and expression especially in the second movement when you can easily think of the waves of the sea on a moonlit night. The LSO strings and woodwinds are so expressive with restrained but effective brass contributing to a brilliant climax at the end of the third movement.

It ranks up there with other recordings I have including Jun Markl/Orchestre National de Lyon and Charles Dutoit/Montreal SO and Charles Munch/BSO.
Read more
6 people found this helpful
Report abuse

AndyB
5.0 out of 5 stars perfect
Reviewed in the United Kingdom on April 5, 2020
Verified Purchase
all in order
Read more
Report abuse