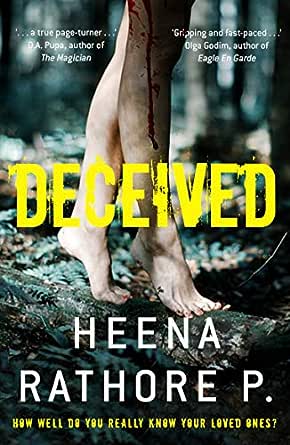 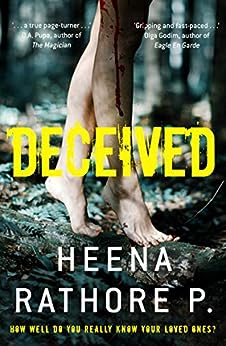 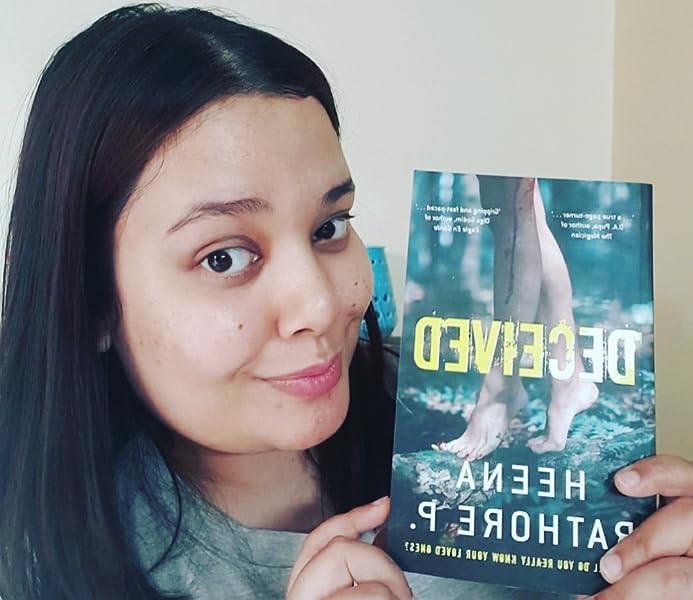 Deceived: How Well Do You Really Know Your Loved Ones Kindle Edition

Heena Rathore Pardeshi is a writer, novel critic and the chief editor at a local small publishing house.
She is also a YouTuber and content creator for IGTV as well as an Instagram influencer.
She is a recipient of 2k20 Influential Women Award (Literature) and Top 100 Debut Novels By Indian Authors 2019. She is also the member of Indian Author's Association.

Her works include Deceived, her debut novel, Life In Reverse: Big Bang Of Non-Fictions (co-author) and Mirakee (World's Largest Anthology - releasing in May 2020)

Heena is twenty-nine years old and lives in Pune, India with her beloved husband, Vishal and 6 naughty-as-hell cats, in a house full of books, music, and love.

She's an introvert and likes staying at home most of the time. She loves cats and has fostered more than 20 cats in her city, volunteering in rescue and foster as well as neuter and release missions.

Being a life-long dysthymic, having clinically diagnosed with chronic depression, she does whatever she could in helping spread awareness about mental health issues through her works.
She is also an animal activist and helps in fostering, helping adoptions and in neuter and release missions in her city with various animal foundations and NGOs.

4.4 out of 5 stars
4.4 out of 5
3 customer ratings
How does Amazon calculate star ratings?
Amazon calculates a product’s star ratings based on a machine learned model instead of a raw data average. The model takes into account factors including the age of a rating, whether the ratings are from verified purchasers, and factors that establish reviewer trustworthiness.
Top reviews

Rachel Poli
4.0 out of 5 stars An Edge-of-Your-Seat Read
Reviewed in the United States on October 11, 2019
*This review was originally published on RachelPoli.com

The author’s publisher contacted me about reading an eARC of the book among other things for the release. I was excited to work directly with the publicist and when I found out the book was a thriller, I was sold. I love mystery and suspense, so I was eager to give this one a try.

I have to admit that I wasn’t too thrilled with a lot of the characters. Ally was a good protagonist and I was able to relate to her through her anxiety. Her father, Stephen, was a great character too. I loved seeing the dynamic between father and daughter.

Steve, Ally’s cousin, appears to help solve the murders even though he stopped talking to Ally when it all happened. They make up after so many years lost, but that’s it. I expected the two of them to get close again, have a lot of scenes of the two of them figuring out the mystery together, but there was barely any of that. After they made up, they only spoke once in a while and that was it. I almost felt as though there was no point to having them be distant in the first place.

I absolutely love Sam, Ally’s roommate, and Max, Ally’s dog. They were the most loyal, trusting, and caring about Ally and everything else. They were crafted really well, as was the killer. His crazy tendencies was very well done.

One nitpick I have about the characters are the names. Ally’s father is named Stephen and her cousin is Steve. Ally’s boyfriend is named Danny while Steve’s assistant is named Donny. I got used to it after a while, but it did get confusing at times. I kept reading “Danny” as “Donny” if I went too fast and then I found myself wondering why Danny was helping Steve. Nothing major, but I felt as though better names could have been chosen.

We follow multiple characters throughout this story, each chapter being a different POV. However, the protagonist is Ally, a young woman still grieving over the murders of her mother and younger brother. She has her roommate and best friend and her father, but she’s mainly just trying to move on with her life.

She ends up meeting a guy, Danny, and moves in with him despite her friends not being too thrilled about it. She then begins to realize that he isn’t exactly who she thought he was.

I thought this was such a clever plot and an interesting twist on the typical stalker-killer. We saw through the eyes of the killer, yet that didn’t give anything away. It leaves room for the reader to figure it all out alongside the main characters.

With that said, I did still manage to figure it out long before the killer’s identity was revealed. Things were just a bit too fishy and there weren’t any red herrings. There wasn’t much else for me to go on so it was pretty easy to figure out who the culprit was long before it was revealed. It was predictable because that was the only lead that was given to us, but the author did a great job not revealing any information.

The author has a clever way of getting her words across. I found her writing to be easy to follow along and enjoyable to read.

Alternating POVs was a good choice as well. Sometimes they can get confusing when you’re following multiple characters. Not only were we following four characters-Ally, Steve, her journalist cousin, Elizabeth, the 13-year-old who killed her parents, and the killer himself. Elizabeth was from a different timeline. However, it was all well done and written in a certain order so that you wouldn’t feel lost.

I found this novel to be enjoyable and edge-of-your-seat gripping. The writing style and POVs really made the novel what it is and the killer was crafted so well. The novel ended up being much darker than I thought. Somethings the killer did bothered me a bit, but I also have a weak stomach. So take that as you will.

Deceived by Heena Rathore P. gets…
4 out of 5 stars

“Denial. It’s the only thing that keeps most of us from losing our sanity.” – Heena Rathore P., Deceived
Read more
Helpful
Comment Report abuse

JRd1st
4.0 out of 5 stars Great thriller!
Reviewed in the United States on May 11, 2020
When it comes to my reading it's usually all horror, all the time , but when i was asked to read this psychological mystery suspense thriller I said "why not?"

I enjoyed this book a lot! There were 2 or 3 characters that were likeable, but it seemed that most of the characters had mental issues to some extent or were just plain suspicious, so it got a little confusing when trying to figure out "who done it." Towards the end it got pretty suspenseful.

Recommended if you like psychological/mystery/suspense/thrillers. I also feel that a female audience might be a bit more receptive to this novel.

Disclaimer - This book was given by the author, narrator, or publisher at no cost in exchange for an unbiased review.
Read more
Helpful
Comment Report abuse

John
5.0 out of 5 stars A worthy debut
Reviewed in the United States on May 11, 2020
Chilling, suspenseful, and fast-paced, Heena Rathore's debut novel is a nonstop, hang-on-to-your-hat thrill ride. I would recommend DECEIVED to any fan of the genre.
Read more
Helpful
Comment Report abuse
See all reviews from the United States