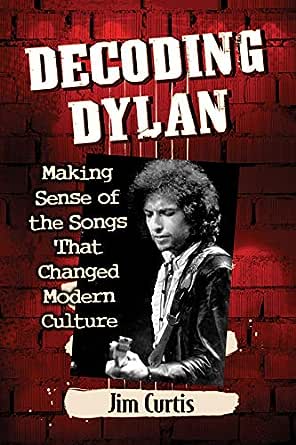 Flip to back Flip to front
Audible Sample Playing... Paused   You are listening to a sample of the Audible narration for this Kindle book.
Learn more
ISBN-13: 978-1476678450
ISBN-10: 1476678456
Why is ISBN important?
ISBN
This bar-code number lets you verify that you're getting exactly the right version or edition of a book. The 13-digit and 10-digit formats both work.

“An expert look at the life and work of folk singer-songwriter and cultural icon Bob Dylan...an exceedingly comprehensive portrait of one of American’s most important and enigmatic musicians...excellent job of depicting Dylan as a man...certainly a must-read for Dylan fanatics”―Pop Cultural Studies; “gives an insight to Dylan and his songs that other books that focus on his life don’t. It’s a refreshing approach and if you’re really into Bob Dylan’s music, you should definitely read it...this book definitely made me appreciate his genius even more than I did before”―Crazy on Classic Rock --This text refers to the paperback edition.

Taking readers behind Bob Dylan's familiar image as the enigmatic rebel of the 1960s, this book reveals a different view--that of a careful craftsman and student of the art of songwriting. Drawing on revelations from Dylan's memoir Chronicles and a variety of other sources, the author arrives at a radically new interpretation of his body of work, which revolutionized American music and won him the Nobel Prize for Literature in 2016. Dylan's songs are viewed as collages, ingeniously combining themes and images from American popular culture and European high culture. --This text refers to the paperback edition.

Jim Curtis taught at the University of Missouri-Columbia for 31 years. He lives in Kennett Square, Pennsylvania. --This text refers to the paperback edition.
Read more

peter case
3.0 out of 5 stars Interesting book, but continually sloppy with the facts.
Reviewed in the United States on September 14, 2020
Verified Purchase
There are some interesting observations and understandings in this book, but so very much factual sloppiness, which could have been easily avoided with some fact checking.
Some more time with an editor would have helped. These problems really detract from the enjoyment of reading the book. In fact I nearly just gave up on it.
Read more
Helpful
Report abuse

Kindle Customer
5.0 out of 5 stars A Deep Dive into Dylan
Reviewed in the United States on September 4, 2019
I wasn't too sure that I would like this book when I first saw the cover and title. I have read other books that either gave a simplistic or misleading interpretation of Bob Dylan's songs. So I took advantage of Amazon's invitation to peek inside and could see right away that Mr. Curtis is a fine writer with a sharp analytical approach to the subject. I bought the book for my Kindle and read it in two days. I will have to go back and read parts of it again to examine all the information he provides and to understand all of his analytical points.

He cleared up a few questions I have had about Dylan lyrics for decades. For example, the line from "Desolation Row" about everybody making love "or else expecting rain" always struck me as simply absurd. Dylan has lots of seemingly absurd or just plain strange metaphors and similes. Example: "the wind howls like a hammer" or "crying like a fire in the sun." But Curtis explains Dylan's mention of rain as a reference to fertility, which matches with the human lovemaking.

He also helped me to understand "Visions of Johanna," a great song that I always felt must have some meaning beneath the surface that I was missing. As he notes, it is not Dylan's use of specific symbols, but his general references to myths and subconscious ideas and emotions that give this and other songs such power. Louise and her lover represent the concrete, everyday reality of life, whereas Johanna is a somewhat mysterious and mythical goddess or earth mother. So the song (poem) represents the division between the sacred and profane, the spiritual and the prosaic or put another way, the spiritual and the material. Unfortunately, he doesn't address the "ghost of electricity" that howls in the "bones of her face." But he does go into the conflict between the new world of technology as opposed to the old world of spoken and written words. He cites Marshall McLuhan on this and it quite interesting. Electricity already had a big role in the world of 1965-66, mostly in terms of television and radio, but its role today is much more important. It is "all too concise and too clear" that we are in a world now dominated by technology like computers and the internet that have diminished the role of words and lifted up the role of the image. Dylan bridges these worlds by using words to create fascinating images. Perhaps Mr. Curtis would like to examine that in a future book..

Another thing I found very interesting was the author's analysis of the rhyme patterns and the length of lines in Dylan songs. While Dylan does have some simple songs that are like the folk songs upon which he modeled them, he has some songs with very different rhyme patterns that somehow work without being all that noticeable to someone just listening and enjoying the song. I won't try to explain that here, you'll have to read it to get the full treatment on that.

The only complaint I can mention, and it is fairly small, is that every now and then Curtis makes a mistake in his description of events and people. For example, he mentions Dylan being booed by fans at Newport in August, 1965, when he sang and played electric guitar, "backed by the Hawks.". Actually, he was backed by the Paul Butterfield Blues Band. The Hawks later went on the road with Dylan and were so often referred to as "the band" that they took that as their new name. But this bit of trivia is certainly not important to the central themes of the book, which will interest other Dylan maniacs like me as well as students of literature.
Read more
4 people found this helpful
Helpful
Report abuse

Lori
5.0 out of 5 stars I might start this review by explaining that my early childhood memories were not....
Reviewed in the United States on July 18, 2019
I admit I was pretty excited to see a book with the words Decoding Dylan in the title. I've long thought of Bob Dylan as a lyrical genius in using a cadence to engage us with simple repetitive words that paint a story. So, studying this book by Jim Curtis which analyses Dylan's life and work utilizing procedures cryptographers typically use I found intriguing.

We know Dylan was a chronicler of social issues in the 1960s. This book provides readers with a series of contexts. It begins with a look at a film that depicts Dylan's concert tour in England in 1965 and transports us back to his childhood and up through his 2016 Nobel Prize in Literature "for having created new poetic expressions within the great American song tradition" and goes on to mention his work in sculpting iron.

I might start this review by explaining that my early childhood memories were not of Bob Dylan. Rather, I grew up listening to my dad pick and sing Hank Williams's songs while my mom played Elvis Presley's album, 'His Hand in Mine', over and over.

This book does detail both of these men being influential in Dylan's life and analyzes his song, 'Stuck Inside of Mobile with the Memphis Blues Again'.

I recall many years ago listening to an interview where Dylan said there would be no music without the words and this stuck with me as the first time I heard 'Blowin' In The Wind' was when Peter, Paul, and Mary sang it. And this would have never been possible without Dylan's lyrics.

If you'd ask my husband his favorite Bob Dylan song he would definitely state, 'All Along the Watchtower'. And when asked why, he would surely state because Jimi Hendrix saw Dylan's brilliance and electrified it.

Perhaps those of us who listen to Bob Dylan are drawn to his reclusiveness much as we are lured to writers like Hemingway or perhaps we recognize Dylan being a keen observer to the world around him- a world we are all a part of.

Either way, Jim Curtis does an outstanding job of taking readers back in time to characters and scenes that provide the atmosphere. You learn some of the obstacles Dylan faced and recognize he survived when many other entertainers didn't.

If one were to sit down with Bob Dylan one might think of a zillion possible questions to ask about him about his creative methods and love of ballads and blues. But I rather think we would just like to listen...listen to him speak or listen to him to sing another song that changed modern culture.

I received this book through the generosity of Jim Curtis' publisher McFarland (McFarlandBooks.com)
Read more
One person found this helpful
Helpful
Report abuse

Walt Herbert
5.0 out of 5 stars Show's Dylan's response to Picasso, Hank Williams and the Revolution of the 60's.
Reviewed in the United States on May 27, 2019
A fascinating book to read because Dylan remains the enigma at the center, while Curtis's huge erudition circles around and around, with dozens of glances into the center. These add up over time who a whole new sense of Dylan’s art, without tiresome ‘explications’ that try to spell it all out.
Read more
One person found this helpful
Helpful
Report abuse
See all reviews