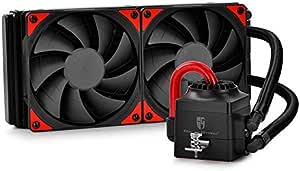 Visit the DEEP COOL Store
3.8 out of 5 stars 208 ratings
| 115 answered questions
Currently unavailable.
We don't know when or if this item will be back in stock.

3.8 out of 5 stars
3.8 out of 5
208 global ratings
How are ratings calculated?
To calculate the overall star rating and percentage breakdown by star, we don’t use a simple average. Instead, our system considers things like how recent a review is and if the reviewer bought the item on Amazon. It also analyzes reviews to verify trustworthiness.

M.S. Garand
5.0 out of 5 stars Best budget AIO I've used
Reviewed in the United States on April 8, 2017
Style: CAPTAIN 240 EXVerified Purchase
Great budget AIO! It really looks badass with the reactor/turbine pump, and the glass tube coming out. the fans are really quiet, even at full load. I was worried the hoses to the rad wouldn't reach because i have a long case, as you can see in the pics, but it reached with plenty of room to spare. It's keeping my fx-8350 at 46-56c so i'm happy with it. I will be going back to this AIO in my Ryzen build as i love the black&red theme
Read more

mezzo
1.0 out of 5 stars Shady business practices in not honoring warranty for $3000 damage in parts
Reviewed in the United States on June 17, 2018
Verified Purchase
I would leave no stars if i could. DeepCool does not honor warranty coverage for their faulty products.

I had purchased a Captain 240 EX through amazon a year and a half ago roughly. Everything was fine up until a few weeks ago when my computer shut off randomly. The Captain 240 ex leaked all over my entire system. My expensive custom rig ruined. The parts damaged and no longer operational are a MSI titanium motherboard, 32 gigs of corsair vengenace dd4 memroy, nvidia gtx 1080ti, m.2 samsung ssd, another ssd, seasonic PSU.. Only thing usable is the CPU oddly enough.

After emailing DeepCool back and forth who have no US representation for support here in the states mind you.. i was told they could only offer me a compensation on the defective cooler and would not reimburse me monies on my damaged rig. Do yourself a favor and stay away from deepcool products.

Abrar
1.0 out of 5 stars DO NOT BUY, Protect your investment and go elsewhere.
Reviewed in the United States on February 17, 2017
Verified Purchase
I worked months of overtime to save up and built a high end pc. After having installed all the components correctly it worked for 3 weeks then spilled coolant everywhere inside my case destroying my Asus rog strix gtx 1080 oc as well as leaving a puddle of coolant on the bottom of the case where my 750W gold PSU is. After having emailed time and time again they still have not responded. Save yourself the headache and go for a corsair or cooler master as those companies will reimburse you for any damages that may occur.
Read more

Tammi
1.0 out of 5 stars Buy this cooler if you want to receive a defective, leaking AIO.
Reviewed in the United States on December 14, 2016
Style: CAPTAIN 240 EXVerified Purchase
Note: Product purchased on NewEgg. It was so terrible that I felt I needed to post on amazon as well.

2/2 of these AIO coolers I have received from DeepCool have arrived in an undamaged box and still leaking from the exact same place. It's not shown in pictures, but apparently the lower end of the J-shaped pipe that joins to the side of the pump housing is a weak point in the system. There is so much pressure in the system that it forces this joint out of its seal, and so a leak occurs.

I took pictures of the issue and contacted deepcool's customer service via email, received a response within two hours. Note, this was in the late afternoon/ early evening and they are in Shanghai, so beginning of the business day there. They apologized profusely, said they had never had an issue like this before, offered me a free replacement and upgrade to the 360EX, which I accepted. NOTE: Multiple reviews have listed this exact same leak problem. I bought this because the reviews with problems listed really emphasized their amazing customer service, so I figured if I was unlucky enough to get a leaking unit, it would be an easy fix.

First thing the next day, a new cooler was on the way, this was on thursday 12/8/16. Yesterday, on tuesday 12/13/15, the new cooler arrived at my house. It seems they have some sort of contract with Amazon, as the replacement came in an Amazon box. Also undamaged. When I opened the box, the first thing I noticed was moisture that had been sprayed around the interior of the box. So, I inspected the pump housing and the EXACT same joint had leaked. The system pressure causes coolant to SPRAY out of this leaking joint.

I contacted deepcool support AGAIN, told them that I would not like another replacement, I would much prefer to just have my money refunded. They offered either refund by paypal, or amazon gift card, stating that some people who chose paypal refund were charged a fee of some sort. I requested the amazon gift card balance, and it was placed on my amazon account the same day. So, to recap, two terrible products with great customer service.
Read more

I've had the Captain 240ex for less than 6 months, and it leaked from the glass "J" pipe where it fits into the side of the pump/cpu block. From other reviews, it seems this is a known failure point. The leak damaged my very expensive video card. It took many hours to clean up all my components and case the best I could (toothbrush and isopropyl, looking at you). Even then, the coolant permanently stained some components it sprayed but didn't damage (e.g. RAM heat spreader, etc.). Therefore, I can NOT recommend this product.

However, I contacted DeepCool right away, wrote a cordial email explaining what happened, with pictures. After a few email exchanges, they agreed to refund my purchase price, plus reimburse the cost to replace my video card. I heard they were good in this regard, but didn't believe it. It turns out they are.

Bottom line: It's a great looking AIO system, has a known point of failure (may still be rare), but the customer service should give you some confidence if you decide to pick up this item. I'm personally sticking with an air cooler for a while, don't want to do that clean up again.
Read more
3 people found this helpful
Helpful
Comment Report abuse

Joe
2.0 out of 5 stars Ill give it two stars for decent temps and a somewhat quiet operation when the pump doesn't sound like its chucking around marbl
Reviewed in the United States on April 29, 2017
Style: CAPTAIN 360 EXVerified Purchase
RYZEN USERS BEWARE

While this cooler seems to have a decent build quality the AM4 bracket must be either purchased separately or added to your cart with the use of DEEPCOOLS promo code. That being said the hold down plate is very loose until the cooler is tightened down, but the problem lies in the thermal compound that is pre installed on the block. The compound forms a very tight bond between the CPU and the water block.....so tight in fact if you try to remove the cpu cooler to re orientate it the pressure of unscrewing the two hold down screws will pull the Ryzen chip right out of the socket and leave it stuck to the bottom of the AIO. This means that you will have to very gently try to pry your 400$ Ryzen 1700x off of the waterblock and hoping that you didn't just destroy it or damage the socket on your motherboard. Ill give it two stars for decent temps and a somewhat quiet operation when the pump doesn't sound like its chucking around marbles in a jar.
Read more
3 people found this helpful
Helpful
Comment Report abuse
See all reviews

Aaron
5.0 out of 5 stars Leaked after 2.5 years **EDITED**
Reviewed in the United Kingdom on April 14, 2020
Verified Purchase
Worked great, was quiet and easy to install but leaked after 2.5 years onto my 980Ti GPU. Will update this review if/when Deepcool get back to me with replacement of damaged parts.

Andy
3.0 out of 5 stars Nice design
Reviewed in the United Kingdom on July 2, 2018
Verified Purchase
Had to return first one RMA, have had second now for a year with no issues, although I do wonder about how effective it is. Experiencing thermal throttle on CPU.

TechManiacHD
3.0 out of 5 stars Looks awesome but...
Reviewed in the United Kingdom on March 21, 2018
Verified Purchase
... It's quite noisy and expensive comparing to other. I switched to Orcus 240 after few weeks of using this one. Orcus is quieter, better equipped and those RGB :-)
Read more
Report abuse