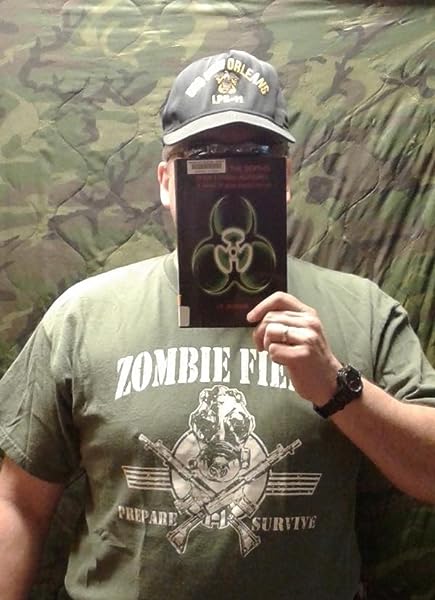 4.6 out of 5 stars
4.6 out of 5
47 customer ratings
How does Amazon calculate star ratings?
Amazon calculates a product’s star ratings based on a machine learned model instead of a raw data average. The model takes into account factors including the age of a rating, whether the ratings are from verified purchasers, and factors that establish reviewer trustworthiness.
Top Reviews

Brandie Bellamy
5.0 out of 5 stars Restored my faith in the zombie genre.
Reviewed in the United States on January 3, 2017
Verified Purchase
First I would just like to say that I am not really much of a fan of the zombie apocalypse genre. I usually tend to lean more towards military fiction such as Tom Clancy, the Armageddons Song and Red Gambit series however that didn't stop me from reading the Extinction Cycle series last year. After I tried reading several other zombie apocalypse novels and lets just say I was less them impressed. Far too cliche and clearly written by authors who really had zero grasp of the military. After giving up for awhile in the zombie apocalypse genre I decided to give it a go one last time with Up From The Depths and I was pleasantly surprised. I was instantly hooked and devoured the series like a flesh eating zombie in no time. J.R Jackson clearly knows his stuff when it comes to the military and also tells a story from multiple perspectives giving you a much broader view of what is happening across the globe. Even if the zombie apocalypse isn't exactly your cup of tea (because it really isn't mine) I would highly recommend this series.
Read more
Helpful
Comment Report abuse

Cynthia Terrones SSgt/USMC
5.0 out of 5 stars THIS IS ONE BOOK OF A SERIES THAT IS NOT TO BE MISSED. I CAN'T WAIT TO FIND OUT ABOUT EVERYONE AFTER THE SUPER ENDING OF BOOK #5
Reviewed in the United States on June 1, 2016
Verified Purchase
Another awesome series, I so cannot wait for Book #6. Through this whole series, J.R. Jackson kept me up all night & on the edge of my seat. I am so glad he decided to go on with more & not just end at Book #5. This is one Series that definitely can go on alittle longer. I can't wait to find out what happened to all the Military on Manhatten Island & see what became of all my friends from the beginning of the series in Book #1 all the way through to Book #5. As that is what J.R.Jackson has done, he has made all the characters from Book #1 & on, become friends & family. So much so that you want all to be safe, so no matter what happened or what was said of the the Military guys from Manhatten, Marines, Seals, the Army & even the National Guard, all I can say is I want Book #6 as soon as possible Mr. Jackson, as I'm sure he has heard that from more than me. I must say that at times there were plenty of tears, especially at the end of Book 5. This is one super series & I'm so ready for more.
Read more
Helpful
Comment Report abuse

jbcardman
5.0 out of 5 stars 5 Stars!
Reviewed in the United States on September 10, 2016
Verified Purchase
After reading book one, I purchased the rest of this series, which is something that I have never done before. The only thing that disappointed me is having to wait for book six. JR Jackson has written a terrific tale, that has entertained me for many days. If you are a fan of post apocalyptic zombie stories, this one has it all, and I highly recommend giving it a read!
Read more
Helpful
Comment Report abuse

Kathleen Lindsay
5.0 out of 5 stars Great Series
Reviewed in the United States on June 30, 2016
Verified Purchase
Ignore the errors in proofreading, the books are great. Start with book 1 though, I was able to get "close" to the characters and was really immersed in the books. There must be a book 6 though because if the series ends with book 5 I'll be disappointed in the author. There are so many strings hanging it's like thread in a sewing box. Read the series, you won't be sorry.
Read more
Helpful
Comment Report abuse

two zero
5.0 out of 5 stars Money well spent.
Reviewed in the United States on September 7, 2017
Verified Purchase
I have thoroughly enjoyed this entire series to date. Very good steady story line, characters, action, adventure, survival. It has been a story that I just want to keep reading.
Read more
Helpful
Comment Report abuse

Wolfpack
5.0 out of 5 stars Not getting boring
Reviewed in the United States on August 21, 2019
Verified Purchase
I am running though these books really fast. Going to be pretty bad when j reach the end. Hopefully you keep them coming.
Read more
Helpful
Comment Report abuse

Harveyshot
3.0 out of 5 stars Good Story, But...
Reviewed in the United States on September 5, 2016
Verified Purchase
The books have a good story but like a lot of other books in this genre, the over-use (IMHO) of military nomenclature (even for pants!!!) is extremely annoying. I don't want to refer to a glossary every other sentence. Once you establish what the weapon is, just say weapon or rifle.
Read more
Helpful
Comment Report abuse
See all reviews from the United States
Pages with related products. See and discover other items: from the depths