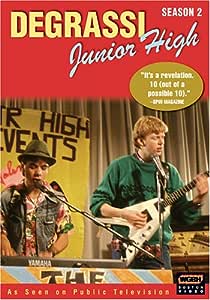 Go to school with the show in a class by itself-and get real! Hailed as "groundbreaking," "powerful," and "totally authentic," Degrassi Junior High confronts it all-friendship, puberty, rumors, sports, studies, and more-with a refreshing ensemble cast and a unique teens-eye-view of life. Sometimes moving, sometimes shocking, but always believable, Degrassi Junior High is a classic for teens of all ages. All your favorite characters and storylines are waiting-find your seat-schools open!

Includes all thirteen episodes of Degrassi Junior High from Season 2: Eggbert; A Helping Hand; Great Expectations; Dinner and a Show; Stagefright; Fight!; Bottled Up; Sealed with a Kiss; Dog Days; Censored; Trust Me; . . . He's Back; and Pass Tense

Year 2 of the youth-oriented series from the 1980s, popular in Canada and on American public television, remains uncompromising in its portrait of middle school-age kids as kids: complicated and unformed, a little vague about values and ethics, often powerless to affect their destinies or achieve what they believe to be right. Set in Toronto, the show follows the dilemmas of several students at Degrassi, though season 2 spends less time with the younger set than in the series' debut year. Perhaps that's because there are some truly serious matters for the program's 8th graders (mostly the same kids carrying over from season 1) to confront, including issues of teen pregnancy, alcoholism at home, inappropriate teacher behavior, censorship, sexism, and much more.

The most pronounced storyline in season 2 is the pregnancy of Christine "Spike" Nelson (Amanda Stepto), a situation her peers seem to handle well but not so Degrassi's PTA or the local school board. These agitated adults want to pull Spike from school and force her into some kind of shame-based program for unwed mothers. Spike's friends stand up for her, including the earnest Caitlin (Stacie Mistysyn), whose editorial in support of Spike is rejected by the school paper's faculty advisor and ends up on a flyer passed around campus. (For her trouble, Caitlin receives detention and a lecture from Spike, who doesn't want to be a cause du jour.) Meanwhile, the father of Spike's baby, Shane (Bill Parrott), wants to help but is hindered by his parents, who want to sweep the whole matter under a rug. Apart from Spike's woes, season 2 finds a provocative recurring story in the arrival of a substitute teacher at Degrassi, a handsome fellow with a subtle tendency to touch female students in flirtatious ways, peer down blouses, etc. After Lucy (Anais Granofsky) is duped by his attentions, she makes a point of educating other girls about him. Sexual issues are also in the forefront of a confrontation between Joey (Pat Mastroianni) and Degrassi activist L.D. (Amanda Cook), the latter objecting to the presence of pin-up photos of near-naked women inside Joey's locker. L.D. retaliates with pin-ups of hunky guys in her own locker, embarrassing Joey and landing both of them in hot water with the principal. As with season 1, this suite of episodes really grows on a viewer and becomes irresistible family television. And, hey: what about those '80s hairdos.... Wow. --Tom Keogh

4.3 out of 5 stars
4.3 out of 5
58 customer ratings
How does Amazon calculate star ratings?
Amazon calculates a product’s star ratings based on a machine learned model instead of a raw data average. The model takes into account factors including the age of a rating, whether the ratings are from verified purchasers, and factors that establish reviewer trustworthiness.
Top Reviews

K. Wright
5.0 out of 5 stars Great Show!
Reviewed in the United States on August 31, 2016
Verified Purchase
I got caught up in this show on one of the PBS stations when I was a teenager years ago, and it was the best thing to watch on Saturday evenings. So I was very excited to see that all seasons of this show were on Amazon Video. I was looking forward to binge watching all of the Degrassi shows, including Degrassi High, and Degrassi the Next Generation. I got halfway through Season 2 one Sunday afternoon last month, only to discover I could no longer watch the show for free (with the Prime subscription anyway). I couldn't believe they cut it off like they did and wanted me to either buy or rent the show to watch it. I never knew Amazon Video only gave you access to watch certain shows for a certain period of time. It's been on my Watchlist for months, and I had just gotten around to watching it. There were so many things that I had forgotten about with this show and to say that I am disappointed that I can no longer view it unless I pay for it, is an understatement. This is a really great show, especially for pre-teens and teenagers. They tackled a lot of issues, including teen pregnancy, drug use, abuse, and alcoholism. Amazon, this show should always be free, instead of available to rent or buy.
Read more
One person found this helpful
Helpful
Comment Report abuse

Z Hayes
HALL OF FAME
5.0 out of 5 stars Another gritty yet rewarding season
Reviewed in the United States on August 9, 2015
Verified Purchase
Degrassi Junior High is what I'd call an evergreen TV show. I watched this as a teen with my siblings and though decades have since passed, my love for this show remains strong. I have been viewing this with my fifth-grader and discussing some of the issues dealt with on the show. In this second season (btw, I do recommend this show be watched in sequence, i.e. the first season, followed by the second and third), the characters continue to grow and evolve. 14-year-old Spike, who discovered she was pregnant in the last season faces some tremendous challenges: her ex Shane has still not told his parents about her pregnancy, Spike later faces possible expulsion from the school, and amidst all this are two young teens trying very hard to deal with the repercussions of their actions.

Other tough subjects are also tackled here: Kathleen, who is the typical straight-laced high achiever hides the secret that her mother is an alcoholic; seventh-grader Arthur worries he is a sex pervert when he keeps having recurrent wet dreams; Caitlin finds it a struggle to hide her epilepsy from her friends; and, in one of the most disturbing episodes, lonely and neglected Lucy, whose parents are too busy to be real parents, finds herself the victim of a predatory monster. This episode enabled my daughter and I to have a frank and meaningful discussion about how to handle such situations and what should be done should something like this crop up. As difficult as it was to watch this episode and talk about it later, it proved to be very rewarding. This is what I love about this show: it enables honest and meaningful conversations to be had around what can prove to be extremely unpalatable topics. Highly recommended.

Azzan
5.0 out of 5 stars Put it back on air!!!
Reviewed in the United States on April 17, 2014
Verified Purchase
Unlike Degrassi: the Next Generation, Degrassi Junior High told kids, teens, and adults what they needed to know and hear. Not all the typical "90210 lovey-dovey stuff". Season 1 was just a start; season 2 is where it starts getting interesting--as coming of age does in real life. Plus, the social climbers are not mean for nothing; there's a story behind it all. And the cast and writers know that well and good.

Recommended to pre-teen, teen, and post-teen viewers, especially those of today. Young at heart? They can watch and learn too. A lot of adults forget they were kids themselves.

Far beyond anything Glee, The Secret Life of the American Teenager, Switched at Birth, or other patronizing convenience-driven shows of the past ten or so years can dish up.
Read more
Helpful
Comment Report abuse

Andrea
5.0 out of 5 stars Even the kids of today love Degrassi!
Reviewed in the United States on September 25, 2005
Verified Purchase
My 12 year old sister who lives in the United States watches the New Generation of Degrassi, whereas I came of age in Toronto watching the first generation of Degrassi kids. I mentioned this old generation to her, describing the various characters and she absolutely wanted to see it! I purchased the first season DVDs of the old generation for her and she ate them up!! She is now 13 and I have purchased the second Season for her as she started the 8th grade. Again, she absolutely loves watching the shows! I find it strange that she would be drawn to these old style shows... the old hair, clothes, styles.... but she loves them as much as I did then. It just goes to prove what a great show that was and how the lessons never fade.
Read more
One person found this helpful
Helpful
Comment Report abuse

Penny
5.0 out of 5 stars I have loved this show
Reviewed in the United States on July 7, 2016
Verified Purchase
I have loved this show! I just found the junior High seasons. They are all wonderful. Love the quality, overall hte seasons were good.
Read more
Helpful
Comment Report abuse

Latrece
5.0 out of 5 stars Huge Fan
Reviewed in the United States on March 30, 2016
Verified Purchase
I loved this show as a teen. Glad to be able to go back in time for a few hours.
Read more
Helpful
Comment Report abuse

storm761
5.0 out of 5 stars Excellent series
Reviewed in the United Kingdom on June 28, 2013
Verified Purchase
I Have watched all the Degrassi series now,each one bringing back Memories of my youth and some of the story lines are quiet deep and very realistic.
Great acting and excellent storylines ,a must for any collection...
Read more
Helpful
Sending feedback...
Thank you for your feedback.
Sorry, we failed to record your vote. Please try again
Report abuse

Richard Archie Fillo
5.0 out of 5 stars Five Stars
Reviewed in Canada on June 20, 2015
Verified Purchase
Learned a lot from this show!
Read more
Helpful
Sending feedback...
Thank you for your feedback.
Sorry, we failed to record your vote. Please try again
Report abuse

Socksbird
5.0 out of 5 stars Five Stars
Reviewed in the United Kingdom on January 27, 2015
Verified Purchase
All well
Read more
Helpful
Sending feedback...
Thank you for your feedback.
Sorry, we failed to record your vote. Please try again
Report abuse