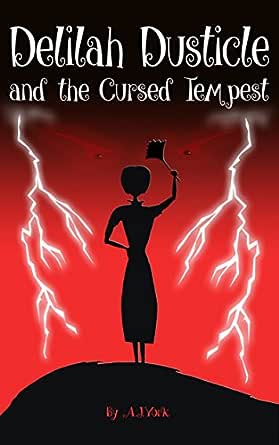 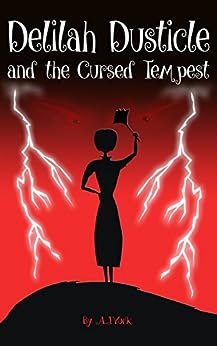 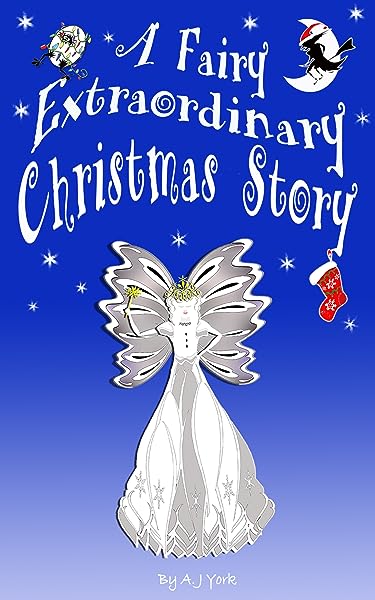 Trish (I read too much!)
4.0 out of 5 stars Fun read...
Reviewed in the United States on May 15, 2016
Delilah Dusticle and the Cursed Tempest is a modern-day fairytale featuring a dust fairy and her cleaning company. This time, she’s called on to save a town from a terrible curse, but though her dust fighting powers are perfect for the job, she knows she can’t use them in the way everyone expects.

I really enjoyed this story. The writing is tight and to the point, while still bringing to mind the vivid imagery that breathes life into a story. There’s a good bit of magic, as would be expected in a fairy tale, but in a modern setting. The characters are also pretty cool and varied in their personalities and quirks: the leather jacket guy (there’s a funny picture of him in the book), the lady who’s always searching for nearby enemies and threats, and even the grumpy sponge, whose grumpiness is offset by a new bout of orneriness I found delightful.

The illustrations are a bit more abstract than in earlier books, but artistically pleasing and complementary to the story. Near the end (starting chapter 10) the cute little spider is back (the one from the Transylvanian adventure). I’d have loved to see more pics of grumpy sponge because he’s another of my favorites, but what’s there is good.

The only thing that threw me off is that it’s been a bit too long since I’d read the previous book. As a short read, this story doesn’t spend much, if any, time reorienting readers to the things leading up to this point. For a little while, I thought I might have missed one of the books as what was mentioned seemed unfamiliar. I later figured out that some was referencing events from the previous story, some was previously unrevealed backstory, and the rest was filling in the time between the last story and this one. On that note, I’d recommend reading (or rereading) the previous two stories, plus Eliza Bluebell, before starting this one.

Overall, I thought this was a fun read, both humorous and serious at times with a clever cast of characters and an interesting setting. I’d recommend it to folks who like shorter reads, fairy tales, and funny stories. The illustrations are nice, too, though not quite as standalone entertaining as they were in the last book.

I received the review copy of this book from the author.
Read more
Helpful
Report abuse

Anela
4.0 out of 5 stars A fun, sweet story with a great message
Reviewed in the United States on August 1, 2016
My Take: This book was provided to me by the author for review.

I’ve been a fan of the Delilah Dusticle series from the beginning and this installment is no exception. (Read my reviews of the earlier books here) Fun, light-hearted, and engaging, I always find myself smiling down at my Kindle as I dig in to another of Delilah’s adventures.

This time, Delilah and her team are on a trip to India. The author described the sights, sounds, and smells of the country in great detail. If she hasn’t been there herself, it’s clear that she has a great team of betas checking her work for authenticity (cue enormous applause!). Delilah is on a mission to save a girl but old enemies lurk about, new dangers threaten her mission, and time is running out. As usual, this was an exciting read.

But alongside the action is a poignant message about processing grief that is delivered with beautiful care and empathy. I always love this about the Delilah Dusticle stories: they are a lot of fun, incredibly creative, and told with straight forward language that kids (and adults) can access and absorb–however they also include a deeper meaning beyond the antics, something that sticks with the reader long after they close the book. Perhaps I enjoy this part of York’s writing most of all (well, the magical powers run a close second).

The Mundane: It’s been a little while since I read the last books so it took me a minute to remember all the characters, their quirks, and their relationships to each other. That being said, I adore the supporting cast of characters to the lovable Delilah.

Summary of Thoughts: Currently this book is $2.99 for the Kindle. A sweet story with a courageous protagonist! I’m a big fan of this series (and its artwork) and can’t wait for the next story. I highly recommend it for kids and adults alike.

Namrata Ganti
4.0 out of 5 stars Adventures all the way!
Reviewed in the United States on May 13, 2016
This is a rather short novella about Delilah's adventure in India. The story is fast paced and there is not a single moment in which you are likely to feel as though the author is beating around the bush. It is a simple, fun filled adventure where Delilah and the other Dust busters go off to save he world, or more like a girl from the clutches of a powerful and cursed storm. We once again meet all the wonderful characters from the previous books and it feels as though it is a reunion of old friends. The author leaves us with a taste of what is to come in what might be the final book of the series. The author has managed to capture the essence and beauty of India as well as the heat! The descriptions of the transport systems, the train station etc were spot on.

A delightful short story for fans of the series, this is a perfect book for young readers. It is easy to understand and is comparable on some level with the Faraway series and many others by Enid Blyton. I strongly recommend this book and the others in the series for youngsters starting out to read or still too young to pick up a book. It can be read out to them. The perfect bedtime novel.
Read more
Helpful
Report abuse
See all reviews