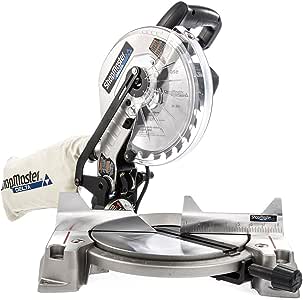 The Shopmaster S26-260L is the perfect addition to your home workshop. This 10 inch miter is packed full of features as well as the power to handle the demands of a handyman all at a price that you will love! Discover why people can't keep from talking about the Shopmaster 10" Miter Saw w/ Laser.

Shop Master 10 in. Miter saw with a battery operated laser that makes aligning the blade to the work piece more convenient and precise. It features a Spindle Lock that holds the blade in place during changes. The shop Master 10 in. Miter saw is perfect for the Dyer in the family or for everyday use. It features a powerful 15 amp motor that cuts through wood like butter and spins the 10 in. Blade at 5500 RPM. It has denoted stops at 0, 15, 22.5, 30, and 45 degrees. The battery powered laser ensures an accurate cut every time. It is UL listed and comes with a 3 year warranty. The saw can make Left bevel cuts from 0 to 47 degrees. It works virtually with all Miter saw stands.

4.4 out of 5 stars
4.4 out of 5
217 global ratings
How are ratings calculated?
To calculate the overall star rating and percentage breakdown by star, we don’t use a simple average. Instead, our system considers things like how recent a review is and if the reviewer bought the item on Amazon. It also analyzes reviews to verify trustworthiness.

An Avid Reader
1.0 out of 5 stars Positive stops don't work -- Not worth the frustration!
Reviewed in the United States on June 24, 2019
Style: 10-Inch Shop Master Miter Saw with LaserVerified Purchase
This miter saw is not a Delta. It is Chinese-made junk . I’m returning mine, and buying a DeWalt 10" compound miter saw (DW713). For $60 more, it will save you hundreds of dollars and hours of frustration in the long run.

The Delta-Shopmaster 10” compound miter saw has some problems including:

- The positive stops are so subtle, it’s easy to glide past them. They don’t actually stop the turntable at a set angle. Even stopped at an angle, there is more than a degree of play. This is unacceptable for a miter saw, even if it’s not a high-end saw, as it undermines the most basic function of the saw. You cannot make a cut to any level of accuracy, let alone be able to repeat accurate cuts.

- There are no mount holes in the fence. As this is a useful feature and an essential part of my building style, I would prefer not to drill through the fence, and end up doing a bad job and having to live with it, and making the saw un-returnable.

- The control arm for the turntable is known to break (from many reviews), and mine was flexing even as I barely tightened it. Even when tightened, the turntable moves slightly, making it practically impossible to get a proper angle setting, along with the aforementioned positive stop problem.

- All the parts are cheaply made and are prone to breaking easily. Even when bringing down the head, it doesn’t feel like it will last a while.

I realize that this is a lower-end saw, and I can't expect that it will have the bells and whistles of a more premium-priced saw. However, as a miter saw, I would expect that it will make accurate miter cuts, or at the very least, accurate 90 degree cuts, but this saw fails in those aspects too. Being at a lower price point, the saw is designed to get beginners get into woodworking, but this saw is too much hassle to get to work properly, and still makes it impossible to get consistent, repeatable cuts, making a beginner woodworker frustrated and making one prone to quitting altogether. Even I, having a couple years of woodworking experience and being pretty handy in general, went through the hassle of trying to set up the saw, but ended up frustrated with the results. No two cuts were the same angle, let alone square.

Ironically enough, as a beginner, the best choice is not the cheapest. Go a little more expensive and it will make your life easier.

Zach.H
5.0 out of 5 stars Good saw for the $$
Reviewed in the United States on October 7, 2019
Style: 10-Inch Shop Master Miter Saw with LaserVerified Purchase
Great saw!
Only slight worry is the accuracy of the swivel... It's a plastic knob and for me; if I tighten it good, I feel like I'm about to break it.. Sometimes the angle pivot comes lose and if I don't notice, it will cut slightly beveled! - Maybe user-fault, but if it was a locking latch style it wouldn't be an issue!
Other than that, it's light and does everything I need it to with what I think is a reasonable price.
Never used the laser that came with it.
Read more
4 people found this helpful
Helpful
Comment Report abuse

Phil
5.0 out of 5 stars Best money can buy
Reviewed in the United States on February 23, 2019
Style: 10-Inch Shop Master Miter Saw with LaserVerified Purchase
I had many baseboards to install, the machine is precise enough for such job. I can relate to some reviews pointing out the fact the angles are not precisely enough identified but it is good enough for general work.
I found the laser too weak and difficult to properly center. I decided not to use it at all and always check with the blade itself the proper position (very successfully)
The rest of the machine is of very good quality and worth any dime.
Read more
5 people found this helpful
Helpful
Comment Report abuse

Cinobey6
1.0 out of 5 stars Don’t waste your money or time
Reviewed in the United States on April 30, 2020
Style: 10-Inch Shop Master Miter Saw with LaserVerified Purchase
Within a year the laser has become unstable and unreliable-unable to secure it. The back rail is also warped and making a 0 cut from the left requires you set the blade at -1 while from the right requires a +3 degrees. Impossible to do the simplest jobs. WASTE OF MONEY
Read more
4 people found this helpful
Helpful
Comment Report abuse

Jay
5.0 out of 5 stars Nice miter saw
Reviewed in the United States on July 30, 2018
Style: 10-Inch Shop Master Miter Saw with LaserVerified Purchase
Received saw; was well packaged; no shipping damage. Setup was easy; checked blade and fence for accuracy; they were right on: impressive; did change the blade to a 80 tooth blade; blade change was simple and easy. Laser alignment was on the money; to be honest I probably wont use the laser that much; I prefer to manually eyeball the cuts. .As another reviewer mentioned, the angle stops or detents are easy to go right past; there is no lock like the older miter saw made by Delta had. will just have to take an extra few seconds to ensure that saw is actually on the angle I want; then tighten the miter lock handle/ screw. I have had Delta miter saws in the past and they worked well; I expect to get many years of service from this unit.
Read more
5 people found this helpful
Helpful
Comment Report abuse

scott farine
2.0 out of 5 stars Faulty laser
Reviewed in the United States on October 2, 2018
Style: 10-Inch Shop Master Miter Saw with LaserVerified Purchase
Saw itself is fine, laser full 2 degrees off. Why pay extra for laser that does not work.
Read more

Jamie
3.0 out of 5 stars Medium grade mitre saw.
Reviewed in the United States on January 31, 2020
Style: 10-Inch Shop Master Miter Saw with LaserVerified Purchase
Since I only needed this saw for a special project and will only use it a few times a year, I did not want to spend the money for a high end saw. This saw did do the job I needed it to do. The laser light has a separate on/off switch to activate manually powered by batteries. If one does not remember to turn it off after each cut, the batteries will be used excessively. The major miter angles do not lock solidly in place and must be tightened down and may move a little in the process. I have used higher end saws in the past and of course would have liked to have all the high end accessories on this unit, but that is not what this saw was designed for. However, it should be very sufficient for the do it yourself person for small projects.
Read more
Helpful
Comment Report abuse
See all reviews

Page 1 of 1 Start overPage 1 of 1
This shopping feature will continue to load items when the Enter key is pressed. In order to navigate out of this carousel please use your heading shortcut key to navigate to the next or previous heading.
Back
Next
Pages with related products. See and discover other items: Best chop saws for wood, sliding table, Explore chop saws for woods, Explore Chop Saws