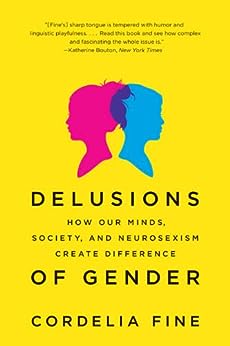 Delusions of Gender: How Our Minds, Society, and Neurosexism Create Difference Kindle Edition

In a methodical and devastatingly effective manner, Fine eviscerates the recent trend in attributing society’s gender-based differences to biology. The sheer girth of her analysis is staggering as she addresses everything from scientific studies going back more than a century to the latest assertions of “Mars and Venus” author John Gray. Fine pivots from studies on gender-based clothing and toys to a discussion of education, and reviews recent Caldecott Award-winning children’s books, noting that one gender is consistently described as “beautiful, frightened, worthy, sweet, weak and scared.” (Guess which one.) Fine also explains how experiments are manipulated to provide desirable results and how results are presented without necessary caveats (such as the fact that men were not part of the study). This is social science at its hard-working best as Fine uses solid references to refute the notion that biology trumps pervasive stereotyping, and offers a sterling rebuttal to agenda research and the lure of pseudo-science. --Colleen Mondor --This text refers to an alternate kindle_edition edition.

Cordelia Fine is a Professor of the History and Philosophy of Science at the University of Melbourne. She is the author of much-acclaimed A Mind of Its Own (Icon, 2006) and Testosterone Rex (Icon, 2017). --This text refers to an alternate kindle_edition edition.
Read more

4.4 out of 5 stars
4.4 out of 5
501 global ratings
How are ratings calculated?
To calculate the overall star rating and percentage breakdown by star, we don’t use a simple average. Instead, our system considers things like how recent a review is and if the reviewer bought the item on Amazon. It also analyzes reviews to verify trustworthiness.
Top reviews

Zoe Kay
3.0 out of 5 stars Decent, but completely ignores nonbinary and intersex
Reviewed in the United States on October 27, 2018
Verified Purchase
I learned a lot from this book and she debunks a number of theories about "male and female brains." That said, for someone conducting so much research on sex and gender, how can she not even address gender and sex as a spectrum? Nowhere in this book does she address intersex people (1.7% of the population) nor nonbinary people. Instead her work firmly endorses a strict gender binary. What a pity.
Read more
46 people found this helpful
Helpful
Report abuse

j
5.0 out of 5 stars Excellent survey of the state of the science.
Reviewed in the United States on January 27, 2019
Verified Purchase
A true story, and well told. If you find yourself upset by this book you might want to have a look at your own implicit biases.
Read more
17 people found this helpful
Helpful
Report abuse

Kira Jahn
5.0 out of 5 stars Fascinating Look At Gendered Science and Society
Reviewed in the United States on April 25, 2018
Verified Purchase
Fascinating look at our gendered world. I found it especially interesting to learn how the foregone conclusion of female inferiority/male superiority is baked into tests that have purported to be objective, but of course are not. Pretty sad to read how, over thousands of years, this one thing remains constant: men as a group seem to truly need to prove themselves better than women. The author has made a quite thorough study of this subject, debunking the Male Variability Theory [it's false], likewise disproving various and sundry evolutionary psychology nonsense such as men and women being "hardwired" to think/feel/do/act opposite each other. The rational reader, after absorbing this clearly written and engrossing book, will have learned quite a bit on the subject. Glad I read it.
Read more
22 people found this helpful
Helpful
Report abuse

christopher
4.0 out of 5 stars Enlightening read about scientific short-comings
Reviewed in the United States on July 13, 2019
Verified Purchase
Fine does a wonderful job exploring the flaws within scientific studies that are often under-scrutinized, yet shape the public’s understanding of gender and behavior, in addition to exposing the gender bias that impacts the experiments themselves.
Read more
7 people found this helpful
Helpful
Report abuse

mark manning
5.0 out of 5 stars An imperative read!
Reviewed in the United States on May 29, 2019
Verified Purchase
This is a superb coverage of gender equality and how we need to change society from its roots if we ever want science and everything else to reflect less harmful bias.
Read more
5 people found this helpful
Helpful
Report abuse

A Naik
5.0 out of 5 stars Empowering
Reviewed in the United States on May 1, 2020
Verified Purchase
Just holding the book in my hand felt so empowering, as if I finally have a weapon to fight gender stereotypes with. The book made me realize how much I had limited myself in the name of "natural instincts". It is enlightening as well as empowering to know the power of the brain, how it is so closely interlinked with our culture, our society. The author has a wry sense of humour, which keeps your interest in the book alive till the last page. I am very grateful for the author's work, really important for women!
Read more
One person found this helpful
Helpful
Report abuse

dreambeam94
5.0 out of 5 stars Five Stars
Reviewed in the United States on May 6, 2018
Verified Purchase
Excellent read with great examples to prove the points being made
Read more
6 people found this helpful
Helpful
Report abuse
See all reviews

Arthur Koestler
5.0 out of 5 stars Incredible stuff
Reviewed in the United Kingdom on April 24, 2018
Verified Purchase
I came at this as someone who had read The Essential Differences and Pinker's The Blank Slate thinking that this would be a mediocre attempt at a rebuttal, but far from it. Cordelia Find presents lots of very interesting material and sound counter arguments to genetic determinism. She doesn't completely solve all of the problems out there in my opinion and I still think it is an open question as to whether gender socialising our children is an evil of catastrophic thing. However if you have an open mind on the issue this is a very valuable book to read and no doubt will at least temper some of your more vulgar opinions on gender
Read more
16 people found this helpful
Report abuse

E17
5.0 out of 5 stars Extensive research and references
Reviewed in the United Kingdom on October 20, 2018
Verified Purchase
Wow, Cordelia you have been very busy producing this book - thank you!

To painstakingly explore study after study, to interpret scientific and psychological data, and then translate into a book to be enjoyed by everyone... this was most certainly a passion project.

Though the book is fact filled, Cordelia's wit and humour stays throughout.

key topics include: neurosexism, unconscious bias, stereotype threat, societal pressures, media, lazy influencers, all of this impacts the way we see ourselves and each other.

Women and Men are human beings and have been artificially (and rather eerily if you think about it) been seperated into different camps due to their genitalia.

A must read for all, especially for those who are finding it harder to comprehend that gender attributes and behaviour are artificially imposed.
Read more
8 people found this helpful
Report abuse

Leslie Gardner
4.0 out of 5 stars Contemporary enquiry
Reviewed in the United Kingdom on May 31, 2020
Verified Purchase
What I've v enjoyed about this is its common sense tone, and easy handling of statistics making her points about anomalous claims of assessment by number.. it's all rigged, and the sooner we learn that the better. Well worth it if only to learn that message.
Read more
One person found this helpful
Report abuse

Anne H. Jensenchatroux
5.0 out of 5 stars Really worthwhile read
Reviewed in the United Kingdom on May 30, 2019
Verified Purchase
As someone who works with gender equality this was a really important read! Unfortunately, a lot of the differences between men and women are down to nurture not nature.
Read more
3 people found this helpful
Report abuse
See all reviews