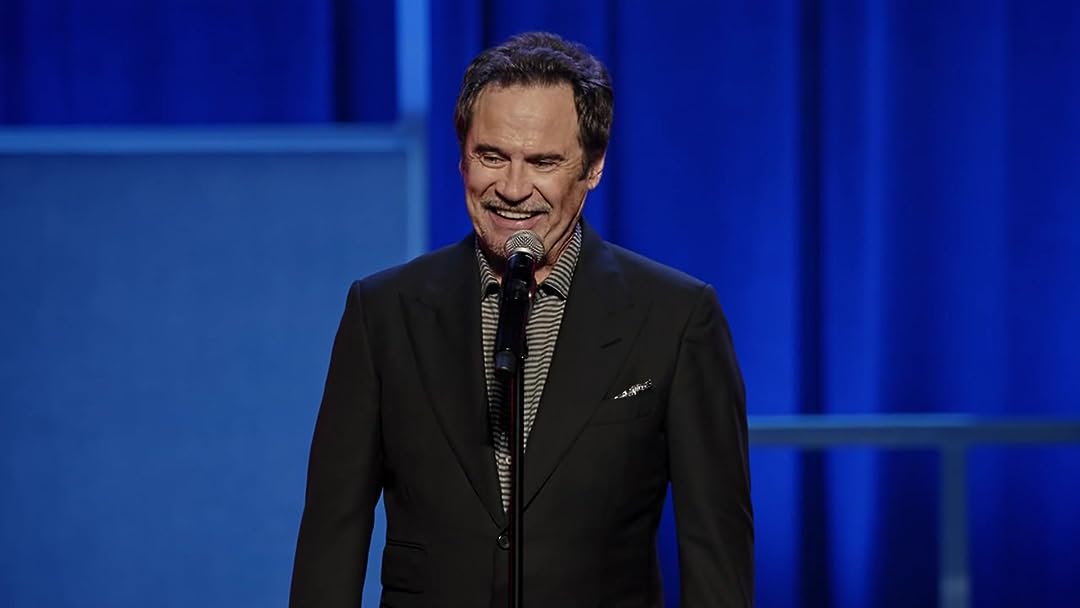 (618)
5.758min2018X-Ray18+
Five-time Emmy award winner Dennis Miller takes on the current climate like no other can in Fake News, Real Jokes! From selfies and airline travel to Trump and journalists, he delivers his signature critical assessments in his low key style that has been deemed by The Hollywood Reporter as "the most cerebral, astute and clever standup ever".

TonyReviewed in the United States on November 12, 2018
1.0 out of 5 stars
Terrible
Verified purchase
His jokes are no longer funny. They're just sad and cringe worthy. I couldn't watch more than 10 minutes.
141 people found this helpful

JVIIReviewed in the United States on February 5, 2019
2.0 out of 5 stars
Forget the politics involved. Disappointing and not super funny.
Verified purchase
I have been a big fan of Dennis Miller’s older comedy specials ("Mr. Miller Goes to Washington" and "Black and White", especially). Some of his older bits had me laughing out loud and I still go back and check them out to this day. This new special leaves a lot to be desired. I am sure many reviews here are either positive or negative depending on which way your politics swing. I didn’t care either way about the politics. The truth is, his comedy just isn’t what it was. Even the non-political stuff was just meh. He retreads on a lot of his old stuff too, but not in a good way. The writing felt a bit lazy. It was clear that a lot of the applause from the audience was based on political bias, and he played into that quite a bit, which felt cheap. I was just hoping Miller would recapture the humor of his older specials, but it just wasn’t there. His writing now and days just leaves me saying “huh?” , and not because of his (should be) patented arcane references. His humor just doesn’t make a lot of sense anymore. He now sounds like a bitter, older dude. I was hoping for a lot I guess, but this special just didn’t deliver. I hope he does another special in the future and gets back to his roots.
88 people found this helpful

MikeReviewed in the United States on November 9, 2018
5.0 out of 5 stars
Much needed refresh from Netflix comedy specials.
Verified purchase
As usual, a smart and accurate take on current events with his sharp wit and extraordinary word choice. Refreshing break from the non-stop liberal, Trump-hating specials all over Netflix. Glad to rent and support Dennis Miller!
102 people found this helpful

TDReviewed in the United States on November 24, 2018
5.0 out of 5 stars
SO FUNNY but also TRUE
Verified purchase
If you can appreciate humor from a GOP angle, Dennis is so great! Some lines jump out at us, because we are about his age and have been through the same evolution. These are the approximate words: "I used to be a liberal, but I learned that being a liberal is like going to a nude beach. It sounds like a great idea, until you're there!"
94 people found this helpful

astute shopperReviewed in the United States on November 18, 2018
5.0 out of 5 stars
Something for everyone....no matter what your political proclivities
Verified purchase
Witty, topical, thought provoking and some really good belly laughs. Dennis has always had a finely honed take on life and people in general. He is a treasure for those who want to laugh and think simultaneously. He doesn’t bludgeon you with politics, he plays it straight and calls things as he sees them, using his rapier wit to entertain. Thoroughly enjoyed.
77 people found this helpful

candide-lover Reviewed in the United States on November 18, 2018
1.0 out of 5 stars
i want my money back
Verified purchase
ugh
69 people found this helpful

Nelson RuffinReviewed in the United States on November 7, 2018
5.0 out of 5 stars
Classic Miller
Verified purchase
The Miller man looked very relaxed and happy on stage. I loved his rants throughout his career but this one had very quick ones, like running a 2 minute drill. As always, very erudite and I am not happy unless he throws a couple of ones by me and I am scratching my noggin about it.. This show will make you laugh all the way thru. 5 stars because he is one of my favorites. Rental fee a bargain for very smart humor.
58 people found this helpful

Albatross NecklaceReviewed in the United States on March 6, 2019
1.0 out of 5 stars
Did Dennis Miller get his funny back? Nope!
Verified purchase
I watched this to see if his "Almost as funny as receiving a late stage cancer diagnosis" years had ended. What I saw was terrible.
In a cruel effort to prove stereotypes this was shot down south. The poop joke went over well. When he wandered into Old Dennis Millerish intellectual territory he got small amounts of laughter from people who due to timing knew they were supposed to laugh but didn't know why the joke was supposed to be funny. Spewing conservative garbage which others have already played out years ago, really got the audience laughing. All his "Technology is so confusing" jokes were also old and played out; the audience loved these to.


32 people found this helpful
See all reviews
Back to top
Get to Know Us
Make Money with Us
Amazon Payment Products
Let Us Help You
EnglishChoose a language for shopping. United StatesChoose a country/region for shopping.
© 1996-2022, Amazon.com, Inc. or its affiliates