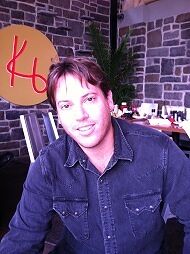 My brother died from a heroin overdose this year. This book is in his honor and tells his story. The book also has a huge amount of information about mental illness and addiction. It is filled with stories and lessons from those I've helped with these issues. I believe with so many deaths from addiction we would all benefit from reading this. The book also is vital as so many young people face depression and the school shootings need to end.
In September, we're donating 20 percent of the profits of this book to help The National Alliance on Mental Illness. They provide support groups and help to families facing mental health struggles. I know helping them is extremely vital and valuable. All of their groups are free and anyone can attend.
I am so thankful for you buying my new book Depression, Bipolar and Heroin. I am more than happy to answer any questions and you can email me personally at blake.levine@aol.com. I wish you wonderful reading and it means so much to have your support.

Blake LeVine is a social worker, life coach and bipolar advocate. As a child he gained national attention for meeting and interviewing notable people. By age 14, he had been invited by President Clinton to The White House. Blake personally met Nelson Mandela, Mother Teresa, The Dalai Lama, 7 United States Presidents, Paul McCartney, Michael Jackson, Princess Diana, Madonna, Audrey Hepburn, Ella Fitzgerald, Steven Spielberg, Bob Dylan, The Rolling Stones, Margaret Thatcher, George Clooney, and over 5,000 notables. At age 15, Blake began to show signs of bipolar disorder. He was diagnosed with bipolar one and spent two years in and out of psychiatric hospitals. He would go on to eventually find the right medications and therapy. Blake began to slowly rebuild his life. He finished high school, college and obtained his Masters Degree in Social Work. Blake has been working for over 15 years helping others as a social worker and life coach. He’s helped the homeless, foster care children, those with schizophrenia, bipolar, addictions, depression and cancer survivors. He also has been educating about mental illness in the media. He’s appeared on Oprah.com, CNN, Life and Style, BP Magazine, and many radio programs. Blake did a 50 city national media tour on camera with Dr. Drew Pinsky educating college students about bipolar disorder. He got engaged to his wife live on The Dr. Phil Show. They have been happily married for 8 years. Blake has two children who are beautiful. He now travels internationally doing talks about bipolar disorder. He has been to over 30 local chapters of NAMI and DBSA. He wrote the book Beating Bipolar which was published by Hay House is 2012. Bipolar survivor Demi Lovato publicly praised Blake’s book and the work he has done helping others. It is Blake’s goal to create awareness and education about bipolar disorder. He proves that with proper therapy, medications and support groups there is a chance to live a healthy life with a bipolar diagnosis. He is the founder of BipolarOnline.com where he offers coaching, his book, and resources for bipolar disorder.

Start reading Depression, Bipolar and Heroin on your Kindle in under a minute.

Jeff from NJ
5.0 out of 5 stars Thought Provoking!
Reviewed in the United States on July 22, 2014
Excellent read..... the author takes you on an amazing journey. You'll get a lot of inspiration from how he has dealt with the obstacles life has thrown his way.
Read more
One person found this helpful
Helpful
Comment Report abuse
See all reviews

Krysta Pear
5.0 out of 5 stars Five Stars
Reviewed in Canada on January 18, 2015
Verified Purchase
Good book. Could do without the religious aspect
Read more
Report abuse
See all reviews
Pages with related products. See and discover other items: lesson learned