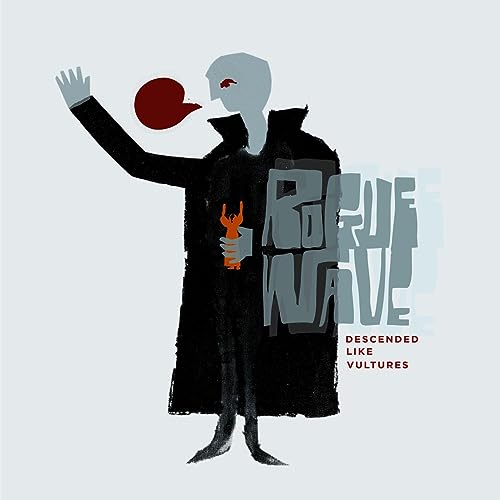 CR
5.0 out of 5 stars One of 2005's Most Underappreciated Albums.
Reviewed in the United States on December 17, 2005
Verified Purchase
I'm a Rogue Wave fan. I'm the only Rogue Wave fan that I know of, and it's a shame. I've been listening to them since their first album "Out of the Shadow" was released and have followed them closely since then. When I read that their newest album "Descended Like Vultures" was a departure from their first album, I was scared. Then I bought it. Wow.

There's really not a bad song on the album. There are definitely low points ("You"), but nothing worth trashing completely. The songs on the album range from soft, acoustic pop songs ("Salesman at the Day of the Parade") to undisputable distorted indie rock ("10:1"). If you're not a Rogue Wave fan, it might be a tough listen, but give it a shot and you're bound to find something you like. If you're a Eliot Smith fan, then there should be no problem making the leap into Rogue Wave territory, since Zach Rogue is surprisingly similar to the late artist. Give it a shot, listen to the samples, and judge for yourself. For me, I love it.
Read more
17 people found this helpful
Helpful
Report abuse

Sherry Frachey
5.0 out of 5 stars thanks!
Reviewed in the United States on May 28, 2019
Verified Purchase
nice gift
Read more
Helpful
Report abuse

Chickflickholic
5.0 out of 5 stars Awesome
Reviewed in the United States on July 15, 2015
Verified Purchase
Bought it as a birthday present for my husband who loves Rogue Wave. Awesome album
Read more
Helpful
Report abuse

JLG
5.0 out of 5 stars another gem
Reviewed in the United States on January 15, 2014
Verified Purchase
bird on a wire, 10-1, and california are all amazing tracks. This album is really good from start to finish!
Read more
Helpful
Report abuse

Christopher Petro
4.0 out of 5 stars A release that thoroughly defeats the sophomore slump curse that many artists fall victim
Reviewed in the United States on October 2, 2012
Rogue Wave - Descended Like Vultures
Engineered by Bill Racine
Recorded at Supernatural Sound
Produced by Bill Racine and Zach Rogue

What makes Descended Like Vultures so interesting is that it's not only a strong and creatively brilliant album, it's a release that thoroughly defeats the sophomore slump curse that many artists fall victim: it's a superb follow-up.

Oakland based Rogue Wave takes their sophomore release further into experimental pop than their debut, which was largely focused on brooding folk pop. This album in comparison ventures into more textures, melodic atmospheres, and symphonic exploration. The song "Publish My Love" conveys both old and new song structure, taking from their debut the husky vocals and harmony, then blending them with textured My Bloody Valentine-like exploration.

The punchy "10:1" buzzes with a pulsing synthesizer, distorted vocals, and is further livened with a fast-paced roll on the snare. As a pop single, "10:1" stands above the rest because it's so simple - which greatly helps with its catchiness - it's built around a strong, noticeable beat, has snappy hooks and it doesn't overstay its welcome. Another album highlight, "Salesman at the Day of the Parade," rolls acoustic guitar melody in a humming wash of static while Zach Rogue's (singer/guitarist) lovelorn vocals synthesize a bridge between the folk and the Aphex Twin tricks. The song goes along this route for about two minutes when it suddenly erupts into a busy cacophonous wail leading into a thunderous climax, which closes the dramatic opus.

The bottom line is that Descended Like Vultures is an excellent upbeat paced pop album; it melds the brilliant shoegaze textures with Rogue's easy-on-the-ears vocals and an always-noodling electric or acoustic guitar melody. Vultures is strongly recommended both kinds of people, those who liked and those who disliked their debut because Rogue Wave maintained the listenable folk pop qualities, but they matured - exploring a new avenue of pop music, and it absolutely works. Even more enticing is that opening the book of experimentation allows Rogue Wave a vast opportunity for growth, leaving the listener with a curiosity for what direction will be explored next. (Sub Pop Records)
Read more
Helpful
Report abuse

somethingexcellent
VINE VOICE
4.0 out of 5 stars More sunny power pop from an up-and-coming group
Reviewed in the United States on November 24, 2005
For all intents and purposes, the first album from Rogue Wave (Out Of The Shadow) was a solo effort from lead man Zach Rogue that was later filled-in a bit with the help of some musician friends. At first, the group released the CDs on their own, and then like some sort of indie-band dream come true, they found the album re-remastered and re-released by Sub Pop, and the group went on tour in support of it. Enjoying a fair amount of chemistry together, they started writing tracks for a new release together.

Part of the charm of that first album was a sort of rough-hewn and even a bit scattered quality that no doubt came from the fact that one person played a large part in writing most of the songs. Descended Like Vultures then, is just about the complete opposite in most ways, with most songs bursting forth in polished in precise ways. These power pop (even rock, dare I say) tracks are offset a few quieter, understated moments where Rogue croons over more stripped-down instrumentation. "Bird On A Wire" opens the release with aforementioned bombast, and it's obvious that it's going to be an altogether different album than the quirky first release as waltzing verses sway with nervous, noisy punctuations and power ballad choruses.

"Publish My Love" is another sweeping track that utilizes multiple layers of guitar and an almost shiny production quality, and the louder moments stick out even more because of it. Basically, Descended Like Vultures sounds like the album you might imagine from the group in the first place if they'd had more of a production budget and decided to rock out more. On both "Love's Lost Guarantee" and "10:1" (and several other tracks really), one can hear the great melodies that the group pulled off on their first album magnified. The clever lyrics of Rogue are still there, there's just a lot more going on at the same time.

There are a few places on the album where the full band and more lush sound leads things to sound a smidge more rote than on the debut, but despite the new production opportunities, the group doesn't go too overboard and even mixes in a couple more simple tracks for good measure (like the warm, acoustic "California" and subtle synths and guitars of "Salesman At The Day Of The Parade"). One could argue that it sounds like a different group on this release, and technically it is. Still, if you like the last album from Rogue Wave, I can't imagine you going wrong with this one.

Brian
5.0 out of 5 stars Rogue Wave - Descended Like Vultures
Reviewed in the United States on February 4, 2006
Rogue Wave is not an original band. That said, they are still a good band. I think, they do what they do best, in a sea of sound-alike Indie Pop/Rock bands. They sound so pure, so fresh, and fun. Who can deny the beauty of a song as rockin as "Bird on a Wire". Other sweet tracks like the bittersweet "California", "Catform", "Publish My Love", and the single "10:1" complete this album.

"Descended Like Vultures" is vastly underrated. In my opinion, few other bands have put out such a complete album of ballads and rockers and pop-hooks and outstanding song-writing.
Read more
5 people found this helpful
Helpful
Report abuse
See all reviews