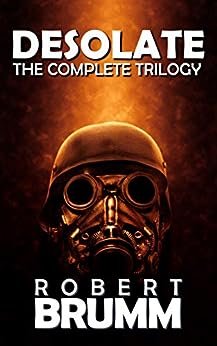 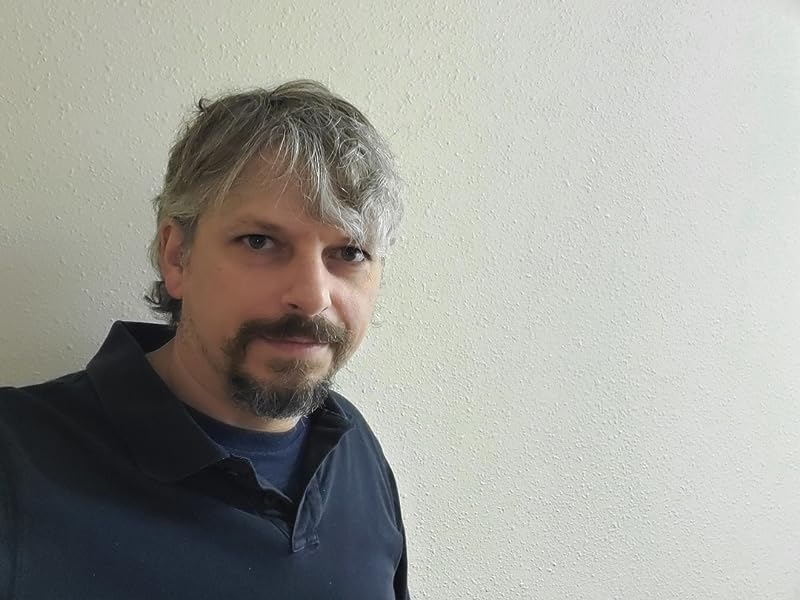 Praise for Desolate from Amazon Readers:
"This is another approach to the post-apocalyptic civilization, or lack thereof, with a huge twist. Mr. Brumm does an excellent job, taking us for a ride with him."
"The author said the series was finished. I enjoyed the books so much that I started thinking of plots for a fourth book. Mr. Brumm, PLEASE RECONSIDER."
"With this novel, Robert Brumm pulled off an amazingly balanced mixture of action, thriller and sci-fi that will keep you clinging to the book until the very end. And when I say "the very end" I mean it..."
"The author took a common idea and fashioned into a new story that is different from everything you have read before."
"I was a bit hesitant about this trilogy as I thought it was going to be mainly about a guy's survival in prison and then on a frigid island. I was totally wrong and became so engrossed in the storyline that I stayed up well over my bedtime reading."
"It started off well as what I thought would be a prison novel but turns out it's a great sci-fi novel with all the best elements... global destruction, an almost unbeatable alien, and a love story all wrapped up in an interesting story line."
"Brumm takes risks, kills with righteous abandon, and refuses to give his main characters a break. Even kills off a few you might care about. He adds humor and desperation in equal measure."

4.2 out of 5 stars
4.2 out of 5
277 global ratings
How are ratings calculated?
To calculate the overall star rating and percentage breakdown by star, we don’t use a simple average. Instead, our system considers things like how recent a review is and if the reviewer bought the item on Amazon. It also analyzes reviews to verify trustworthiness.
Top reviews

Cheryl Stout
TOP 1000 REVIEWER
3.0 out of 5 stars Prison, pandemic, and pandemonium
Reviewed in the United States on September 2, 2018
Verified Purchase
Howard Bell is justly sentenced for life to the International Experimental Rehabilitation Facility located on a small island off the coast of Antarctica. While there the inmates are forced to mine platinum for the Warden of the facility.

Howard is working in the mine when he and his fellow inmates uncover a strange artifact and soon being on a prison island isn't the worst thing that's ever happened to Howard.

I'm glad I got this book as a trilogy and was able to read all three books. I bought the book because of the Antarctica connection - I love books about freezing climes for some reason. The Antarctica aspect was skimmed over, however, so I was disappointed about that.

This is a fast read with quite a few characters. The only one that was really fleshed out was Howard. But I still enjoyed the books and recommend it to people that like to read about pandemics and alien lifeforms.
Read more
2 people found this helpful
Helpful
Report abuse

R. Gardner
4.0 out of 5 stars Well that was a nice read.
Reviewed in the United States on May 25, 2013
Verified Purchase
I buy and download books at an obscene rate. I can't even remember if I bought this one or if I got it as a freebie. I certainly hope I paid for it because it was quite a nice bit of reading. I had no idea where the book was going, but in a pleasant way. I kept turning the page and was continually surprised at the twists and turns. Our poor, nebbish protagonist has either the best luck in the world, he's still alive, or the worst luck in the world - prison, plague, aliens, plane crash, riots, looting, "lions and tigers and bears, oh my!"

A head's up. Like Marvel movies, which always tack an easter egg at the end of the credits, be sure to finish 100% of the book. I mean ALL of it... :)
Read more
37 people found this helpful
Helpful
Report abuse

MLee
5.0 out of 5 stars Both and alien invasion (movie Alien like monsters) and a death star ship plague
Reviewed in the United States on March 20, 2017
Verified Purchase
I got this book in 2013 and it sort of sat on my Kindle for years - guess I went nuts on buying books my first few Kindle months - more than I could read at the time - sorry i didn't get to this book earlier.
Anyway, to the book. Both and alien invasion (movie Alien like monsters) and a death star ship plague. The story telling is both simple and straight forward, the author doesn't try any fancy writing tricks (maybe an early writing attempt??) and some of the characters aren't well 'fleshed out' but the story moves along from the frigid prison to the ship discovery and plague. Some of the story gets a bit lost in Howard's transfer and it is never explained why some people were immune (to the plague, not the monsters - they killed on contact), but this parts get a pass from me because the author keeps the pressure on.
Finally the Epilog deserves a special mention...when will they ever learn!!!!
Good book - time well spent reading.
Read more
2 people found this helpful
Helpful
Report abuse

Vicki
4.0 out of 5 stars 3 to 4 stars
Reviewed in the United States on July 11, 2014
Verified Purchase
Usually I wait a while after finishing a book, before reviewing. I do this on order to give myself time to digest the story. I read this book a little over a week ago. A few days ago, I first attempted to write a review, but I couldn't remember the storyline. Which was weird, because I remember really enjoying the story when I was reading it. I had to go back to the book and read a few pages to refresh my memory. I got interrupted and never had the opportunity write the review. Today, I intended to complete my task, and write the review - and again I discovered that this book left absolutely no impression on me. Again, I had to reread many passages to remember it.

Again I will state that I DO remember enjoying the book. I didn't want to put it down at times. Unfortunately, It's just forgettable . I don't know if this is the result of my memory, or a result of the book.

In the end, I decided to give it 4 stars. It's well written with great developed characters. For the simple fact that the book hasn't remained in my mind, I cannot give it more than that.
Read more
Helpful
Report abuse

C. LeBrasseur
4.0 out of 5 stars Desolate trilogy
Reviewed in the United States on September 19, 2013
Verified Purchase
I got this one as a freebie. I enjoyed it. I thought it had several elements that alone could carry a story- the Antarctic prison, a crashed spaceship, an alien virus, an alien(!), and survival in a post-apocalyptic world. Combined they made for fanciful reading. Always a good mess for the characters to get through. And what drives stories better than conflict? Nothing!

I also thought how the alien procreated was a fun inclusion. The author couldn't very well kill off the main bug-a-boo in the first book, now. And what's more fun than an island swarming with voracious man-eating extraterrestrial critters! Some might say all this is derivative, but shit, what isn't these days? It's the way the author works them together that makes for an interesting (or not) story.

I have a vacation to Russia planned for next year. Always at the back of my mind is what if... What if the world collapses while I'm away? Like the poor souls on vacation in Jamacia when the poopie hits the rotating oscillator, I worry about what would happen then. At least I can feel good things won't collapse from an alien invasion or virus. Still, that leaves plenty of man-made causes to fret over...

A good edit would have helped tweaked some of the clunky writing (particularly the use of 'could be seen'- ugh!). And I'm not one for head-hopping. I like me a good first person or third person limited POV. There's a bit of omniscient POV scattered in among the sections. Nothing outrightly egregious, but as an author myself I do tend to notice (and frown upon) POV slips. I think using third person limited forces the author to limit him- or herself to what the POV character can see, hear, think, or feel. If a plot element is important enough, the author will figure out a good way to include the info. Such efforts only enhance an author's control over the craft. As I said, though, the head-hopping here wasn't all that off-putting.

Anyway, if you're looking for good popcorn summer reading (or winter reading) you could do worse. I will be watching for more from this author in the future.
Read more
One person found this helpful
Helpful
Report abuse
See all reviews

Avid Reader in Reading
4.0 out of 5 stars Prison Escape/ End of the World/ Aliens
Reviewed in the United Kingdom on September 22, 2013
Verified Purchase
Quirky all in one story with end of the world due to plague, escaping from a prison island to fighting off aliens. The cockney characters was ummmm, so wrong.

Book is a good read. I do recommend it to people to try this one out.
Read more
Report abuse

P. A. Sykes
4.0 out of 5 stars Good- just not great
Reviewed in the United Kingdom on June 8, 2013
Verified Purchase
This is one of those books that start off well, with a good premise. I liked the idea that he was imprisoned for a crime he DID commit! My only real criticism was that the author seemed at a loss how to begin the third part of the trilogy.I would have preferred evens to be told chronologically, not skipping back and forth. Overall though, a good read.
Read more
Report abuse

john h
5.0 out of 5 stars Good
Reviewed in the United Kingdom on May 16, 2013
Verified Purchase
Enjoyed the read, I enjoyed following the characters and think that i may purchase the next book in the series
Read more
Report abuse

Jennifer90
5.0 out of 5 stars Desolate
Reviewed in Germany on September 18, 2013
Verified Purchase
One of the few books that were able to give me the creeps. It is a mixture of sci fi, apocalyptic story and Alien. The characters are excellently developed and the plot gripped me the whole time. The style is vivid and descriptive. Of course, some things in the story are really stereotypical, but the book is great.
Read more
One person found this helpful
Report abuse
See all reviews