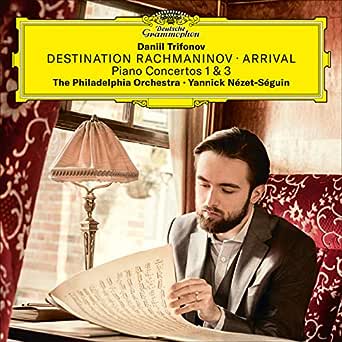 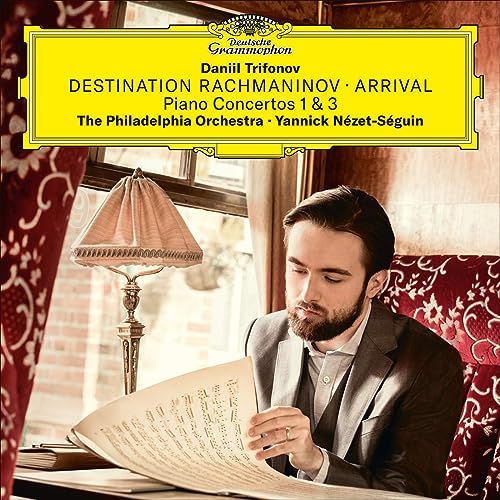 Daniil Trifonov and The Philadelphia Orchestra and Yannick Nézet-Séguin
4.7 out of 5 stars 149 ratings
See all 3 formats and editions Hide other formats and editions
Buy the CD album for $12.89 and get the MP3 version for FREE.&nbspCD album ships from and sold by Amazon.com. Terms and Conditions. Does not apply to gift orders. Complete your purchase of the CD album to save the MP3 version to your Music Library.

Chris
4.0 out of 5 stars Very nice recording, behind Horowitz 1951 (and 1978 with better audio, lesser performance)
Reviewed in the United States on November 3, 2019
Verified Purchase
I tend to collect many versions of my favorite pieces (reading reviews, thank you reviewers), then filter to 2-3 to keep. Rachmaninoff’s No. 3 is one. Favorites are Horowitz’s 1951 with Reiner and 1978 with Ormandy. Trifonov’s recording is one to retain however, does not outrank Horowitz. As Rachmaninoff commented of Horowitz in 1942 "This is the way I always dreamed my concerto should be played, but I never expected to hear it that way on Earth.” (Checking this quote I was amused to see a more proper spelling after reading it in Russian is Rachmaninov, esp with no “soft sign” after the ‘v’. I read Rachmaninoff himself used the ‘ff’ so he chose. So be it.)

I thought Trifonov’s Concerto No. 1 was stellar, No. 3 good but not to Horowitz level. I hasten to confess a lack of in-depth knowledge other than playing the piano growing up, quit at 16. My long time friend Ken would have the insight I lack but sadly lost touch. He was a terrific pianist.

I am unclear as to whether to buy Concerto No. 2. Collecting many, I settled on Richter and Rubinstein as best. Richter was an incredible talent, remarked upon by Rubinstein as the best, Horowitz as the only pianist in Russia of special note (high praise from Horowitz who was jealous of his reputation). Rubinstein’s recording is lush.

Scott S.
5.0 out of 5 stars This new set joins some amazing history in Phily's recording legacy.
Reviewed in the United States on December 16, 2019
Verified Purchase
This last recording of Trifonov's brings his Rachmaninoff set to a powerful close with a first rate account of the third concerto. Nezet-Seguin and the Philadelphia orchestra provide what well may be the finest orchestral contribution in any set I know and Trifonov shows us why he is such a hot commodity now a days. Philadelphia was Rachmaninoff's orchestra where he recorded all of his concertos and the Rhapsody under Stockowski and Ormandy. Where he recorded and conducted his own records of the Isle of the Dead and the Third Symphony and where Ormandy conducted what is still the finest set of Rachmaninoff symphonies. This new set joins some amazing history in Phily's recording legacy.
Read more
7 people found this helpful
Helpful
Comment Report abuse

Mr. Scott L. Leather
5.0 out of 5 stars Trifonov is a consummate Rachmaninoff artist
Reviewed in the United States on December 6, 2019
Verified Purchase
This is a fantastic performance of these concertos which completes Trifonov's Rachmaninoff concerto cycle! His playing of the concertos is interesting in that he takes slower tempi in certain movements and sections of movements (e.g. in the 2nd movement of the 1st concerto and in the 3rd movement coda of the 3rd concerto). But even if one doesn't agree with the interpretations, they are, nevertheless, convincing, and come across as heartfelt and sincere. The emotional communication in the performances is key here as they are very moving performances.
Bravo! I can't recommend this recording highly enough!
Read more
6 people found this helpful
Helpful
Comment Report abuse

Justin Thyme
5.0 out of 5 stars Extraordinary virtuosity
Reviewed in the United States on February 4, 2020
Verified Purchase
A tour-de-force performance by *the* preeminent pianist of his generation. The astonishing velocity and clarity he achieves are truly astounding. IMHO no other pianist has performed Rachmaninov's Third with such mastery and sensitivity. Bravo!
Read more
2 people found this helpful
Helpful
Comment Report abuse

S. W. K.
5.0 out of 5 stars ?My sister recommended this.
Reviewed in the United States on November 18, 2019
Verified Purchase
The music is gorgeous and the recording impeccable. What's not to like?
Read more
2 people found this helpful
Helpful
Comment Report abuse

missingEbert
5.0 out of 5 stars "Caffeine for the spirit"
Reviewed in the United States on December 4, 2019
Verified Purchase
How nice to listen to these Rachmaninoff interpretations. Like "caffeine for the spirit". I don't have any other recordings of these concertos, so no basis for comparison. But having seen Trifonov perform the 2nd Concerto live in Philadelphia (which is on the "Departure" CD) I will treasure these 2 CD's forever.
Read more
2 people found this helpful
Helpful
Comment Report abuse
See all reviews

Serghiou Const
5.0 out of 5 stars The crown jewel of the compilation is clearly the Piano Concerto No.3
Reviewed in the United Kingdom on December 2, 2019
Verified Purchase
I have the feeling that my subject heading is rather stating the obvious. But though not endowed with the unique quality of Piano Concerto No.3, still all pieces in the compilation are jewels on their own merit. Daniil Trifonov's rendition is brilliant while the Philadelphia Orchestra with its Director Yannick Nezet-Sequin offer the artist a deserving accompaniment.

The compilation was thoughtfully conceived and masterly implemented.

The disc commences with the 'Silver Sleigh Bells'. Bells are a central symbol of Russian culture, across the great expanses of the country, they connect events, people and communities and across time, they connect history and spirituality. The piece is joyous and shimmering with emotional tension and extreme technical difficulty lurking beneath its dancing surface.

With its evocation of Russian nature, folk culture and spiritual life, 'Silver Sleigh Bells' sets the stage for Rachmaninov's First Piano Concerto which follows, the work of a passionate young composer. A Rachmaninov full of aspirations and romantic ideals. The composition captures a moment of rare happiness in the life of the young composer. It is a work full of fragrances, like smelling fresh flowers on a field after rain. The First Piano Concerto is music by a composer who has not yet experienced tragedy. The melodies are fresh, the energy vivacious, like those country sleigh bells. In its entire duration, the piece never succumbs to melancholy or grief.

Tragedy, however, was a defining sentiment of Rachmaninov's life, reflecting his personal psychological and existential struggles, and the greater crisis of modernity at the turn of the 20th century. The idyll of the First Concerto was a vanishing illusion in a world where centuries-old social orders, typified by the aristocracy and the church, were crumbling under pressures of political emancipation, industrialization and civil strife.

Rachmaninov's sense of melancholy in the face of these convulsions comes to the fore in his 'Vocalise' which follows the First Piano Concerto and precedes the concluding piece of the compilation, the Third Piano Concerto. 'Vocalise' is an expression of of spiritual longing. The work begins with a motif prefiguring the opening solo piano statement of the Third Concerto, with tightly woven relations between notes, and close, chromatic interrupted progressions. Trifonov's transcription heightens the poignant intensity of its feeling.

The soulful, introspective aspect to Rachmaninov's musical expression, his symbiosis of cultural nostalgic and spiritual longing, comes to its fullest expression in the Third Piano Concerto. It is profoundly Russian music in character and quintessentially Rachmaninov in expression. It is a very intimate form of spiritual affirmation, and continues revealing aspects of this meditation in vast, melismatic phrases. In terms of technical, psychological and emotional complexity, the Third Piano Concerto is among the most substantial undertakings in the piano literature. The piece is a unique example of one unending melody, one continuous flow of musical consciousness- a single rhapsodic journey endowed with nobility of expression. The structure of the concerto reflects that lofty design. The first movement has the character of questioning- a spiritual probing of the mystery of the soul; he second movement is a nostalgic meditation on the pressing of time; the third is propulsive and inspirational-a glimpse of redemption.

dacochrane
5.0 out of 5 stars Who has played this music better?
Reviewed in the United Kingdom on October 26, 2019
Verified Purchase
OK I have Agerich, and Ashkenazy (his best for me is his first for RCA also with the Philadephlia) and a few others but not one produces a performance to top this one. Trifonov gives every phrase, every note, every colour and every nuance expression with the most coherent, passionate, reflective and stunning musicianship. It's also a humdinger of an accompaniment by Nezez-Seguin and the composers favourite orchestra on top form. The recordiing is excellent with perfect balance between soloist and orchestra. Ignore the naysayers. If you love this music you'll be thrilled by this new disc.
Read more
7 people found this helpful
Report abuse

Andrew Smith
5.0 out of 5 stars The best ever
Reviewed in the United Kingdom on November 13, 2019
Verified Purchase
Great recording. This and the others on another cd are the tops of these works I think. Live recordings are flawless and the piano playing simply magic. Even if you own these works already you must add these.
Read more
4 people found this helpful
Report abuse